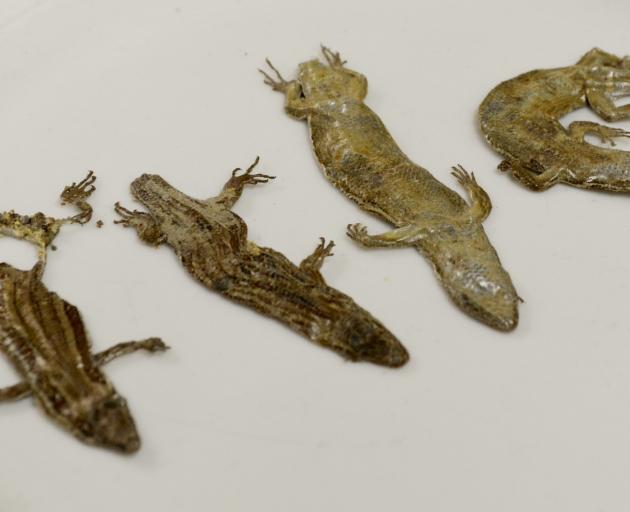 Southern grass skinks (Oligosoma polychroma) found mummified under the carpet in an Otago Peninsula house. Photos: Otago Museum
While most people know New Zealand to be the land of birds, few are aware that it's also a special place for lizards or mokomoko. There are 63 native species of skink and 43 native species of gecko in New Zealand.

In Otago Museum's nature galleries, the lizards of Otago are featured in a diorama to showcase the different patterns and biology of each species. Recently, the museum received a gift of four mummified southern grass skinks that were found under the carpet during a home renovation in Portobello. This donation contributes to Otago Museum's collection of indigenous fauna and helps illustrate an interesting interaction between humans and native animals. 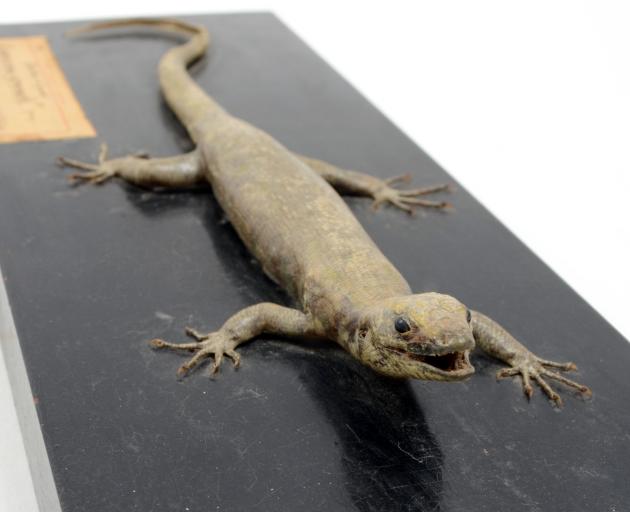 Grand skink (Oligosoma grande).
New Zealand's skinks and geckos distinguish themselves from their global counterparts by giving birth to fully formed live young instead of laying eggs*. This is called viviparous reproduction and the young lizards are independent of their mother at birth. Viviparity may have evolved to provide embryos with better incubation conditions in response to cold climates and safety from predators. It has been observed in many species of snake but in only a few other lizards outside New Zealand.

Most lizards live a hidden life, spending the majority of their time in cracks and crevices of rocks, going into the open only to bask in the sun or forage for insects and fruits. Skinks and other lizards play an important role in controlling insect populations, pollinating native flowers while drinking nectar from them and dispersing seeds after eating native fruits. Conservation efforts have focused on creating habitat by planting native shrubs and removing pest mammals, as skinks are vulnerable to introduced mammalian predators such as cats, rats and stoats.

If you find a sleek and shiny brown lizard in a garden around Dunedin, you are likely looking at a southern grass skink, also called a common skink. Genetic research on New Zealand skinks has revealed that there are regional differences and undescribed taxonomic diversity in many groups of New Zealand lizards including common skinks (Oligosoma polychroma). Several new skink species have been described in the past 10 years and many more lie in wait for researchers to understand the true diversity of New Zealand's mokomoko taoka.

On Lee Lau is the collection officer, natural science, at Otago Museum.