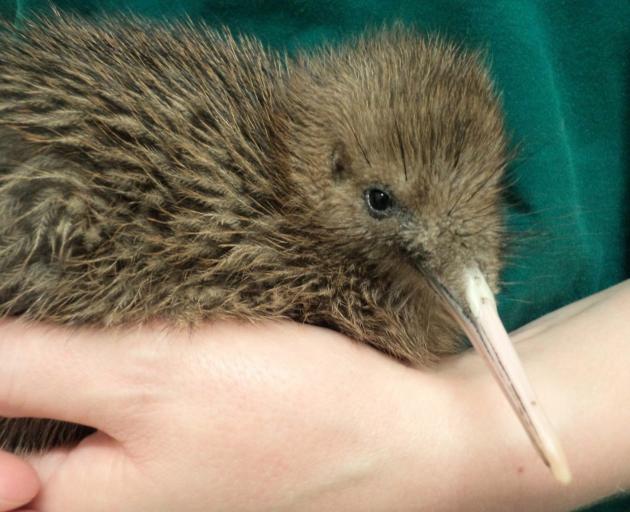 A Haast tokoeka chick brought in for its health check. Photo: Kelly Gough

Orokonui’s staff and volunteers have had a new challenge this hot, dry summer, writes Kelly Gough - caring for wild kiwi chicks from Haast.

Haast is in drought. It's hard to believe, but it's true. The lush bush will survive, of course, but it's a different story for the wildlife.

For a chick, life becomes harder than usual as its sources of food - worms and invertebrates - find somewhere else to live as the leaf litter dries out. What's a young bird to eat?

That is a scenario that has played out with dire consequences for our most endangered bird species this summer, including kiwi. Department of Conservation rangers were finding starving tokoeka kiwi chicks that weighed less than 300g. They needed intensive care.

Knowing Orokonui has a good success rate hand-rearing tokoeka chicks from the Operation Nest Egg (ONE) programme, the Haast Tokoeka Recovery Group approached Orokonui to help these wild chicks as well. It had not been tried before, but a desperate situation called for a daring response. 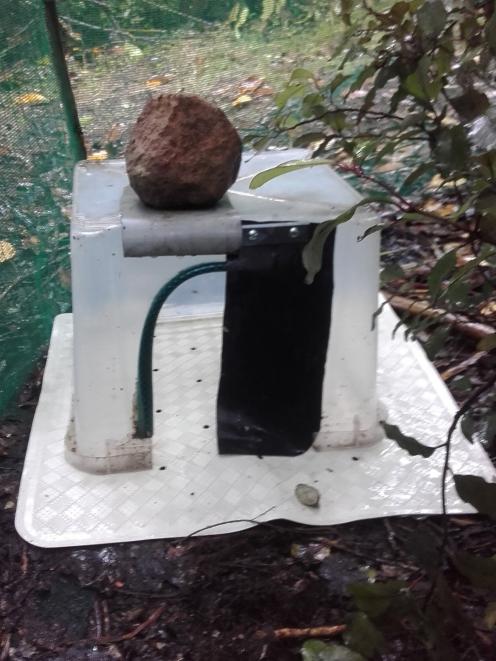 A feeding station (weighted down with a rock) sits on a mat. In time, the flaps will be dropped down to discourage opportunistic scavenging by blackbirds and takahe. Below: A newly-hatched Haast tokoeka kiwi.

Not long before Christmas, a call came in: there were three ONE chicks in the creche, learning to probe in the ground to feed, while being fed gradually diminishing amounts of supplementary food.

This is a painstaking business: supervised volunteers log the chick's daily food consumption and tend to their daily needs, while I monitor the chicks' weight and health to ensure they are on the right track.

ONE chicks are birds that have been raised on supplementary food. Their problem is they don't know how to forage in a bush environment that is still new to them. But it is different for the wild chicks: they know how to probe, but have not encountered the supplementary food mixture that it was now vital to get into their undernourished bodies.

Initially they had to be force-fed once or twice during the day to maintain condition and energy. (That somewhat uncomfortable process can be seen in a video on the Orokonui Facebook page). After a week, chicks Joseph and Bambi had put on weight and were completely fending for themselves.

Each chick was placed in a small enclosure with access to a nest-box to sleep in, and a daily supply of food in a plastic dish about 3cm deep. Cameras were set up to monitor the birds' behaviour at night. The wild chicks at first showed no interest in the supplementary food. One was filmed probing the food, but when its beak hit the bottom of the plastic dish it promptly withdrew it. So volunteers were commissioned to dig up earthworms during the day, which were then mixed with earth and leaf litter in kitty litter trays and placed in the pens for consumption at night.

Camera footage showed they picked up on this quickly and would hop in the tray to forage (a video on the Facebook page shows Joseph devouring a massive earthworm). After a couple of days and nights during which they put on weight and condition, the pens were opened and they continued to do well on their own.

The tools needed for the health screen: scales to weigh the birds; the body condition is assessed, a faecal sample collected and a swab taken.

But our most wary bird has been Sweetie-Pie, the eighth bird to come to Orokonui this summer.

Normally, the dish containing the supplementary food is placed on a mat and covered with a box that has an opening at one end. The mat enables the volunteer who goes out in the morning to gather up any food the bird has scattered around. Kiwi are not tidy eaters! That way all the uneaten food can be weighed, so that we can log exactly how much the bird has consumed.

Sweetie-Pie did not like this set-up, particularly the mat. Video footage showed him approaching the food, then running away. So two eating stations were set up, one with a mat and one without a mat. After two nights, the bird began to take food from the box that didn't have a mat.

After a few days of using mat-less food boxes, I put a mat under the most used food box, and it now no longer seems to be a deterrent.

Happily, according to Orokonui's own carefully monitored Plunket standards, Sweetie-Pie is putting on satisfactory amounts of weight and is almost ready to start the weaning process.

This routine seems to have been a winner, with Joseph, Bambi, Popcorn and Cirrus all transitioning into Orokonui really well. They will soon return to the Haast and their wild life.

Kelly Gough is in charge of the Kiwi creche at Orokonui Ecosanctuary.