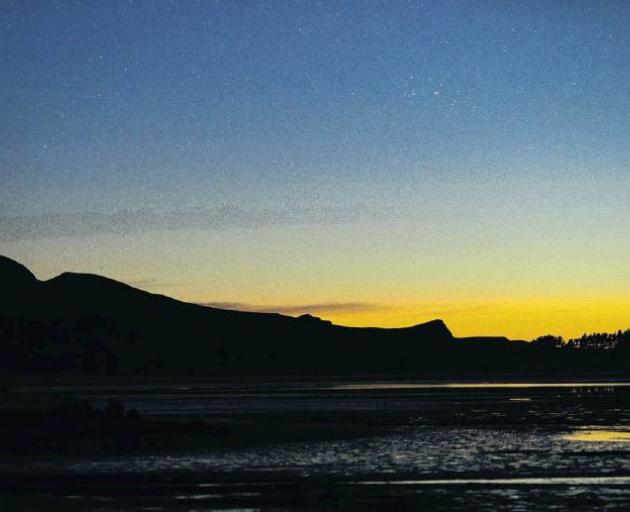 Ian Griffin's always been fascinated by the Pleiades (a star cluster known as Matariki by Maori).

Growing up, I loved using binoculars to study the myriad blue stars that collectively comprise this beautiful cluster, during long winter evenings when it was high in the London sky.

The Pleiades name is ancient Greek in origin and most likely derives from the word plein, meaning ''to sail''. According to tradition, the sailing season in the Mediterranean Sea began when the Pleiades were first spotted in the morning sky.

On the night my second daughter was born, the Pleiades were due south at midnight, as seen from Northern Ireland (where I was living). This inspired me to suggest that my new daughter should be named Merope, after one of the seven brightest stars (legend informs that Merope was the dimmest of the Pleiades because she hid her beauty with a veil).

My fondness for the Pleiades has grown since moving to Dunedin, even though the cluster's position on the celestial sphere means that it never gets higher than 20 degrees above our horizon. Despite this, in June each year I join other keen stargazers in searching for the Pleiades before dawn, as part the Matariki celebrations.

Matariki is of immense cultural significance to the Maori because, as tradition has it, the first sighting of Matariki in the morning sky during the lunar month of Pipiri marked the start of the Maori year.

I'm pleased to report that last Saturday, observing conditions were perfect and I was easily able to spot Matariki. As you can see from this week's photograph, from my viewing spot at the southwestern end of Papanui Inlet, the cluster was visible in a brightening sky as it rose just after 6.30am.

If you want to know more about Matariki, I recommend reading Matariki by Dr Rangi Matamua, who is also giving a talk on the subject at Otago Museum on July 14 as part of the International Science Festival.

Using powerful telescopes, astronomers now know there are more than 1000 stars in the cluster, and that it is 444 light years away from us.