Nugget from the cavalcades 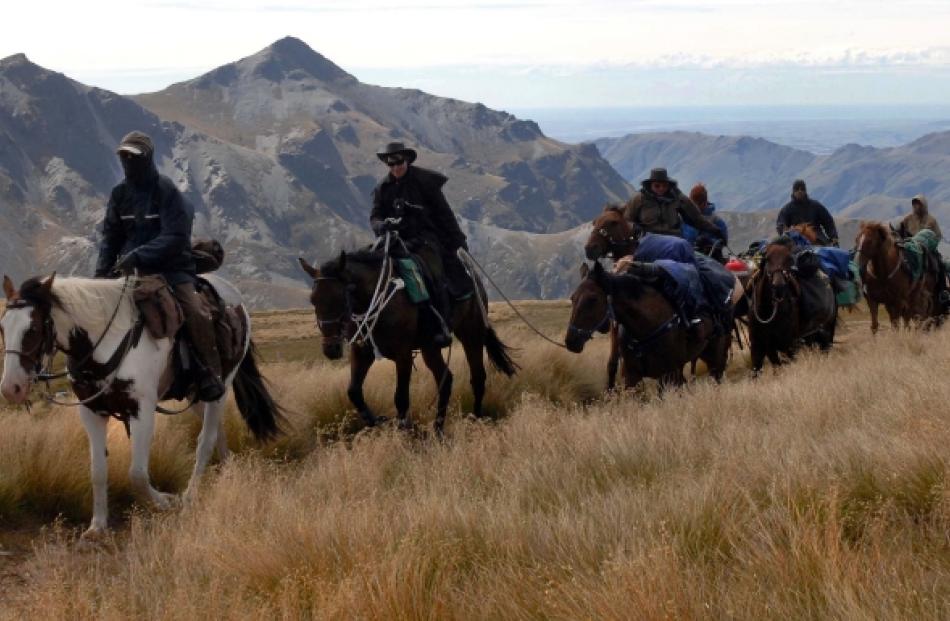 Strong winds chill riders on the Speight's packhorse traverse as they near the summit of Mt Kyeburn. Photos by Stephen Jacquiery 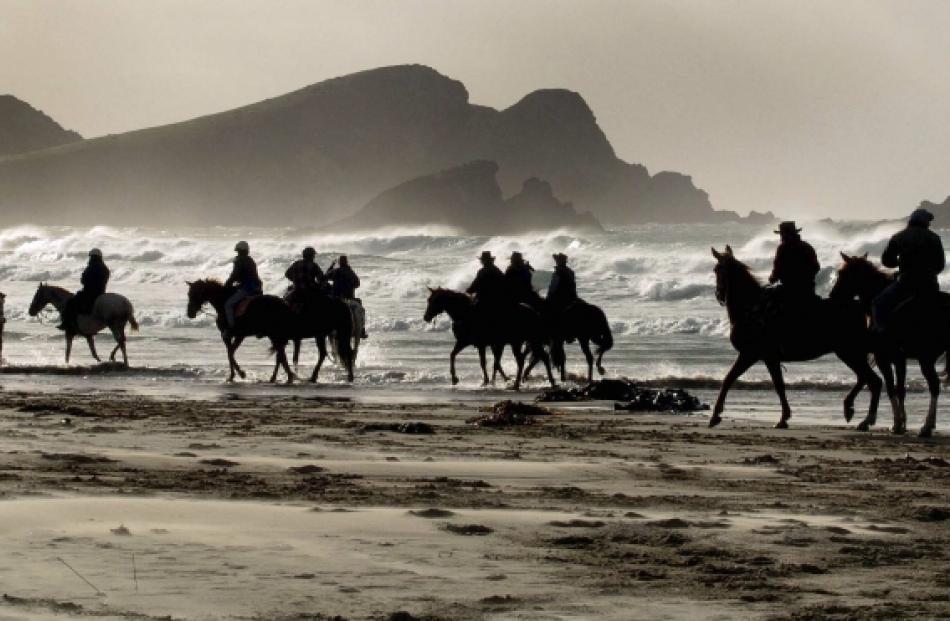 The Glencoe Highlanders on Surat beach. 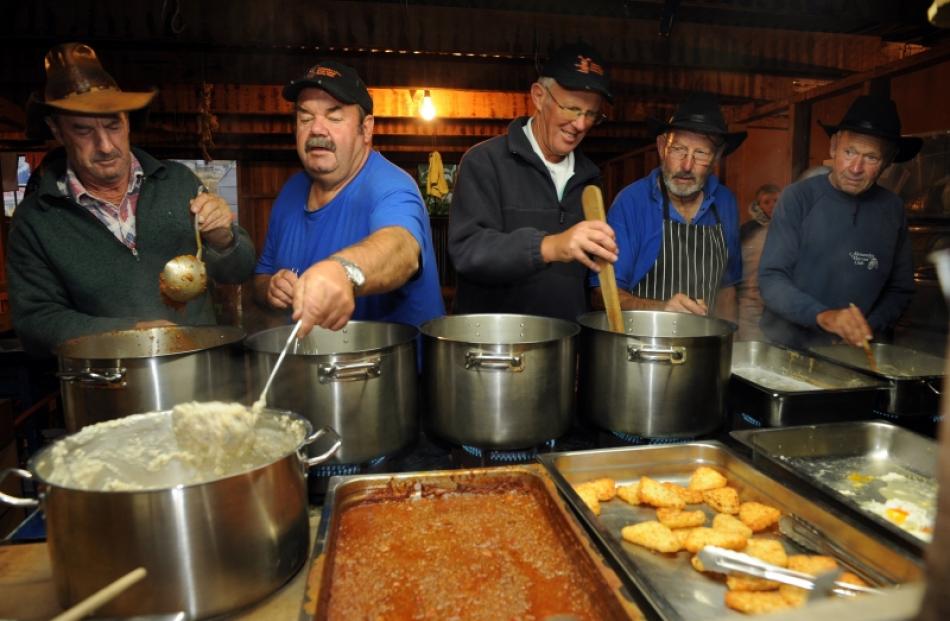 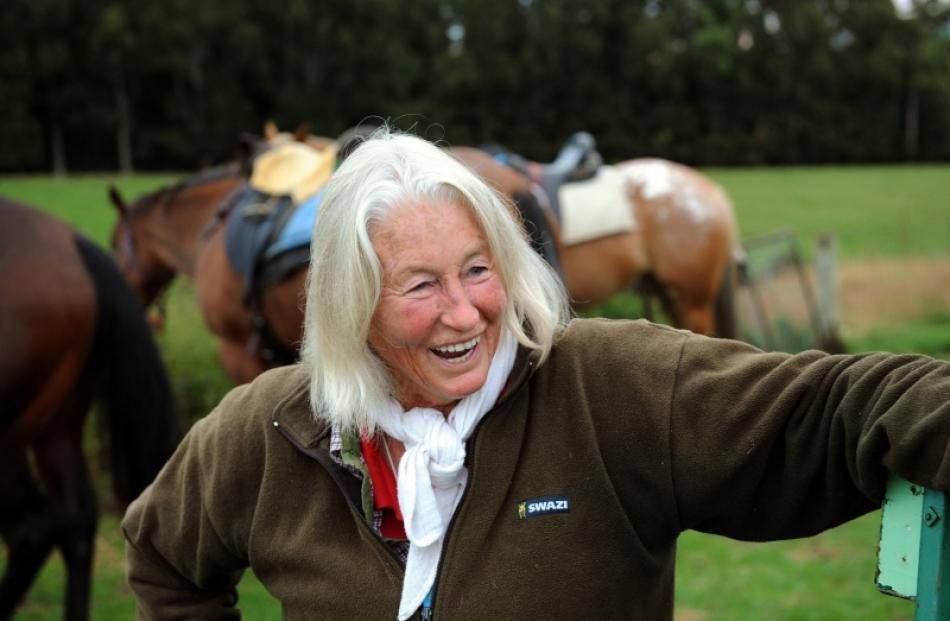 Westwood horsewoman Brenda Harland did not let a broken foot deter her from notching up her 20th cavalcade.

Otago Daily Times agri-business editor Sally Rae and illustrations editor Stephen Jaquiery teamed up to add a book to the already groaning New Zealand bookseller's shelves. This is their story of how that happened.

One a writer, the other a photographer, and between us we have been on more than half of the 20 cavalcades, so co-producing a book on the Otago Goldfields Heritage Trust's horse and cart pilgrimages seemed to make sense.

We had an idea, a vision, a collection of many thousands of photographs and loads of potential subjects for compelling, highly entertaining stories. But before getting too serious, we had to find a publisher.

The first email approach was to a well-known national publishing house and received a firm, "Not our style". At the next attempt, Graham Gurr, from Halcyon Publishing, replied the same day he was contacted with a heartening "Yes, is the answer", followed by an outline of how he would like to see the contents, and concluding with, "How's that for a response?".

That was November 29, 2011 ... the deadline was the end of March 2012. This tight schedule was to ensure the book would be in the shops by November this year, making the most of the Christmas market.

I was excited and daunted by the project, but the size of the job ahead wasn't apparent until I rang Graham just before Christmas to find out basically how to write a book.

His response was along the lines "I'm in a bank in downtown Auckland in festive rush-hour. That's not the sort of question I can answer right now. I'll call you back later", and didn't settle my nerves.

While waiting for his call, Stephen suggested it would not be a good idea to tell him that I already had concerns about meeting the deadline.

Producing a book is no easy process. It is not at all like the romantic image of an inspired writer pouring delightful prose, written from the soul, on to pages. Then, handing the loose-leaf manuscript to an eager publisher before an adoring audience snaffles the resulting work from the shelves.

Here's a tip for wannabe authors: Never do a word count at 5am, only to discover that you have only reached 12,000 words two weeks before deadline and the target is 25,000 words.

That may work for an Agatha Christie or a J.K. Rowling but for the vast majority of authors, the initial explosion of enthusiasm quickly becomes months, or years, of painstaking toil with little guarantee of success.

Google estimates that since the invention of printing, some 130,000,000 unique titles have been published and other research suggests as few as 1% of completed manuscripts ever make it into print.

There are many reasons for writing a book. Academics do so for small target audiences within their disciplines, a small percentage are written "for the love of it", but the majority, such as cookbooks, self-help titles and novels, are aimed at the mass market.

Gold Dust and Saddle Bags - Tales from the Cavalcade (a title eventually settled upon, after much debate, on the back of a paper serviette in a Thai restaurant in Dunedin) came about as a result of a shared love of Otago's glorious high country, which, every year, since 1991, has become the destination for a diverse group of cavalcaders.

Stephen says a photograph is more than just "the push of the shutter".

"First open the locked gate without a key; urgently get the vehicle unstuck from a bog, follow the slippery, scary, steep, shingle-slide goat track to the top of the mountain. Finally, with streaming eyes, you peer into the gale-force wind for an hour searching desperately for any sign of a horse among this barren, unforgiving but beautifully spectacular landscape."

Doubts nag as you question arrangements made by telephone 10 days earlier. Unencumbered by track or road, the pack trail, which travels unsupported, could change its travel plans for any reason, leaving us windswept, frustrated and empty-handed on the top of Mt Kyeburn with a precious day of cavalcade photography wasted.

Finally, far in the distance, what appears at first to be rocks seem to be moving.

After an excruciating wait, suddenly it is action stations. Which route will they take? Where should I stand? What background do I want? Will the sun be shining brightly or dulled by the patchy clouds? Nervous tension as the trail approaches.

Suddenly, they are here. The riders walking, wrapped against the conditions like polar explorers, lead their mounts and their packhorses, which carry large boxes of supplies. There is neither a wave nor a smile as they approach. Like me, they are chilled to the bone.

The quest was also on to capture the "romance and mystique of the cavalcade", as suggested by our publisher, and to seek out those characters that would captivate the reader: the Barry Crumps of the cavalcade world, those individuals who stand out in a crowd.

"Not that it was a difficult assignment, when you had the likes of Brenda Harland, well into her 70s and on the 2012 cavalcade despite a broken foot, yet lamenting her inability to dance in the woolsheds at night. Or Linda Barnes, who defied the medical odds - and a brain haemorrhage - to take part in her 20th consecutive cavalcade.

"Not forgetting the inimitable Maniototo farmer and All Black sire Jim Hore, who described himself as `guard dog' to long-serving trail boss Dave McAtamney."

But telling those stories was only half the journey. Writing up all those colourful interviews - sometimes in the back seat of the ute as it bounced along dirt tracks, balancing the laptop on the knee - was, in many respects, the easy part.

For the next stage was probably the most painstaking and challenging. It involved checking, checking and more checking. Should the word "cavalcade" be capped? How about the ellipsis in the captions? Should the next word be capped? Or not?

There were dates to sort, photographs to match to text and the spelling of names to be double-checked - and checked again. Proofreading seemed a never-ending process and there was always the fear something obvious would be overlooked.

We spent a week on the 2012 cavalcade together. Stephen was photographing the various trails while I interviewed a number of hard cases. These characters were a photographer's dream.

We are proud of what we have achieved. Despite the revisions and reviews we are still being wowed by the photographs and chuckle at the stories. If the book sells well we could expect to make enough out of royalties to have a holiday in Australia, (horse trekking perhaps?), but not England.

Sally will attend a book signing at Oamaru Paper Plus between 12.30pm and 1.30pm on Monday, November 5.

Both Sally and Stephen will be at Cromwell Paper Plus on Friday, November 9, from 5.30pm (6pm start). Tickets are $10 (nibbles included) and available from Cromwell, Alexandra, Queenstown  and Wanaka Paper Plus.

There will also be a book signing at the Wanaka Paper Plus on Saturday, November 10, from 10.30am to 11am. 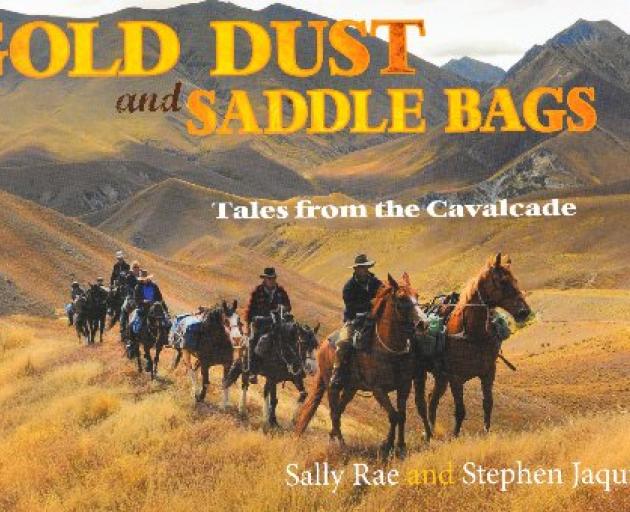 The Otago Daily Times has five copies of Gold Dust and Saddle Bags to give away.

To enter the draw for one, write your name, address and daytime phone number on the back of an envelope and send it to Cavalcade, ODT Editorial Features, Response Bag 500012, Dunedin, or email playtime@odt.co.nz with Cavalcade in the subject line, to arrive before Thursday.