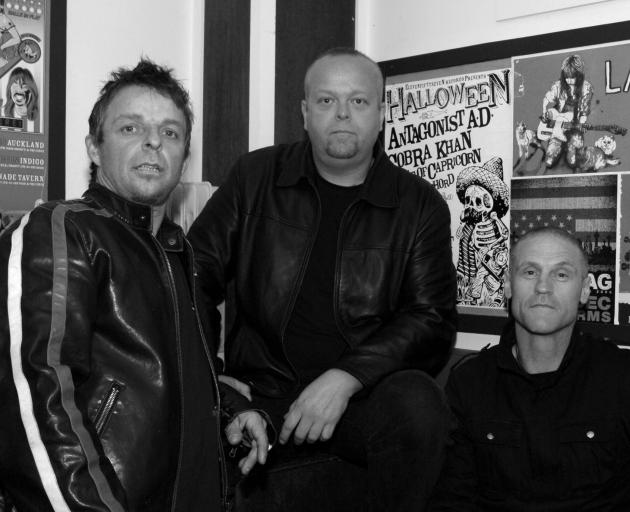 Punk rockers Sticky Filth return to The Cook tonight to play their first gig in Dunedin in more than 20 years. PHOTO: SUPPLIED
Sticky Filth is back tonight for a gig at The Cook with local legends Conniption. It's long overdue, its last South Island gig was more than 20 years ago. Bassist and vocalist Craig Radford reckons now is the perfect time for a return.

"I'm looking forward to going down there, haven't been down in a long time. Lots of things have changed in that time and interestingly enough we've just got our drummer back, our drummer has returned that was with us 20 years ago, so it's quite exciting. These are our first shows with him again in over 20 years.

"Things are going good, the bands feeling good, it's in a good place. Thirty-five years old this year."

Over that 35 years it has earned a lot of respect in the local punk community: its four studio albums from 1987 to 2014 are considered local punk classics, it opened for Suicidal Tendencies in 1993, Bad Brains in 1995, and has played countless gigs locally and in Australia.

This is far from a comeback - Sticky Filth never stopped.

"It's a lifetime you know, 35 years. But we're still trying to get our shit together and stay in tune and all the rest of it.

"I love writing new songs. When you can create a new song, it's the best time. That's what being in a band is all about: jamming out a new tune, creating it.

"We've always been writing new stuff, and I think that's what keeps the band going. I'd hate not to be writing new songs."

In the '80s the very existence of punk music was objectionable. The band faced violence from competing sub-cultures and the police, and even the name - Sticky Filth - was considered too offensive to print in newspapers.

"I remember someone saying to me `You'll need to change your name. You'll never get anywhere with a name like that' and I just thought `Where's anywhere?'.

"We used to play under different names because places wouldn't let us play."

It's inconceivable to imagine a venue today rejecting a band because of its name. This was all just a distraction from what really mattered: the music. Despite society's apparent repulsion, Sticky Filth's goal was never to rile people up.

"I mean we never set out to offend people. I never tried to offend anybody, I never had an agenda of anything except to play music. The songs we would write were pretty much created on the spot and would become what they are. There was no target, there was no plan you know? Just play."

"Why was Sticky Filth an offensive name they couldn't put in the paper and now it's more acceptable? I dunno, it's a study someone should do. There's a university down there isn't there?"

It's Sticky Filth honesty as well as its killer songs that have earned it a dedicated fanbase over the years, and a place among the most iconic provincial punk bands of the '80s.

"We've had a few ups and downs and we've had a few misses. Chris [the guitarist] got run over by a car, he was pretty beat up, and then three months later I had a real bad work accident on an oil rig and nearly lost my leg. We were both messed up at the same time.

"We're lucky, we don't have a big fanbase but we have a very loyal one. Can't beat that."