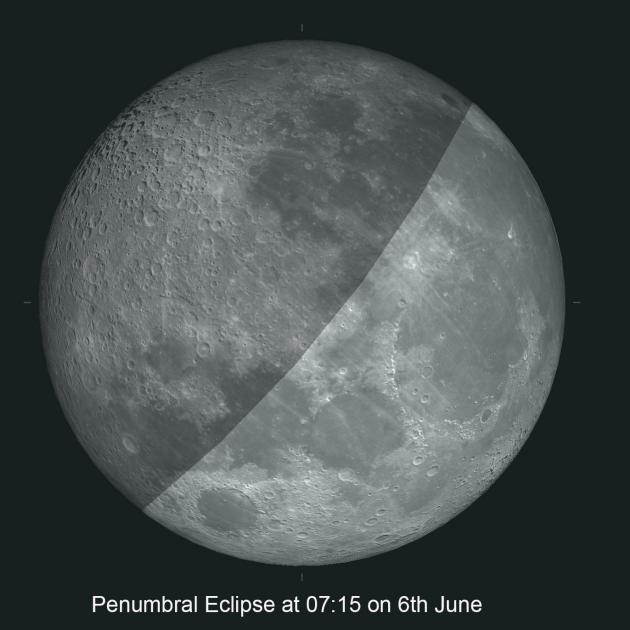 Next Saturday’s penumbral eclipse at 7.15am will look something like this.
The moon is full a week today, on Saturday, June 6, at 7.12am. At that moment, as seen from Otago, our closest celestial neighbour will be 100% illuminated and will be visible low in the western sky, which will be brightening in the run-up to dawn writes Ian Griffin.

Twelve minutes later, at 7.24am, the second of this year’s quartet of lunar eclipses will reach its maximum extent. As seems par for the course in 2020 (which to me is not turning out to be a good year at all!), all four lunar eclipses will be very hard to see, as all of them are of the penumbral variety. What does this mean?

There are three types of lunar eclipse.

The most dramatic is a total eclipse when the inner part of Earth’s shadow, called the umbra, completely covers the moon’s surface. During a total eclipse, the usually bright full moon darkens and can appear blood red for more than an hour.

The third kind of eclipse (which will occur next Saturday morning) is called a penumbral eclipse. To be honest, penumbral eclipses of the moon are somewhat underwhelming, since only the lighter part of the Earth’s shadow falls on the moon’s surface. They can be tough to spot at all, and it will be fascinating if anyone in Otago can discern this particular eclipse. The event begins at 5.45am. Look for a subtle darkening of the upper left quadrant of the moon over the next 90 minutes. Photographers might try to capture the progress of the eclipse using a telephoto lens, taking exposures every few minutes starting from 5.30.

In Dunedin, the moon sets just before 8.14am, and the eclipse ends at 9.04am, which is well after sunrise. I’d love to hear from anyone who successfully spots this eclipse.