Paddkeboarders start the 2017 White ISland Race at St Clair Beach. Photo: Peter McIntosh
One of the toughest events on the New Zealand surf life-saving calendar celebrates its 50th anniversary today. The annual race from Dunedin’s St Clair beach to White Island and back is a mental and physical test of endurance like no other, Ian Stuart writes.

A bitter southerly squall was lashing the Otago coast towards the end of winter, 1969, as Duke Gillies and Neil Reid yarned from the safety of the shore.

Reid then club captain, were discussing the hot saltwater pool at the southern end of their picturesque white-sand beach.

Besides their involvement in surf life-saving, both men were also on the trust that ran the saltwater pool, nestled in the rocks at the surf beach.

The pool was the only hot saltwater pool in the country and during the 1969 winter a new heating system had been installed, in its first extensive makeover since it opened in 1884.

Gillies and Reid were discussing how to entice the public to the beach and the pool as summer approached.

"We have to do something to get some publicity about the pool," Gillies said.

There was a long pause before Reid responded: "What about a craft race to White Island and back?"

And so it was born; one of the toughest events on the New Zealand surf life-saving calendar. Only qualified life-savers could enter the Labour Day weekend race but they faced an often daunting task in what was traditionally appalling weather that would usually drive people away from the beach rather than entice them to strip off and tackle the bitterly cold southerly wind, rain and the powerful, cold surf.

It is not the longest race or endurance event in New Zealand surf life-saving, nor is it the largest. What make it one of the country's toughest are the conditions in which it is held.

A good day with even a moderate surf and a flat sea between St Clair and White Island is rare. As they line up on the beach for the mass handicapped start, the swimmers, board riders, ski paddlers, canoe paddlers and boat crews are usually greeted with a powerful and very uninviting 2m-plus surf, a bitterly cold southerly wind and rain, and a sloppy metre-high swell that threatens to swamp boats and canoes and knock ski and board riders off their craft, all the way to the island and back.

Only five times in the past 50 years has it not started at the beach. In 1973, 1978, 1988 and 2005 it was transferred to Otago Harbour because of the appalling conditions at the beach. In 1982 it was abandoned completely when a gale-force southerly prompted the race controller to look at the alternative harbour course but that, too, was ruled unsafe.

"Due to very strong wind gusts and bitterly cold weather [in the harbour] it was decided to abandon the race," club captain Phil Johns noted in the White Island Race records.

The objective is simple: get through the surf, go hell-for-leather for 2.5km to White Island, get around the back of the island and either negotiate the washing machine between the island and a rock on the southern side, or take the long course around the rock, head back 2.5km to the beach, survive the heavy surf and cross the finish line.

The first race on October 12, 1969, attracted surf boats, canoes, skis, and boards from all Otago clubs and a handful of Canterbury clubs. 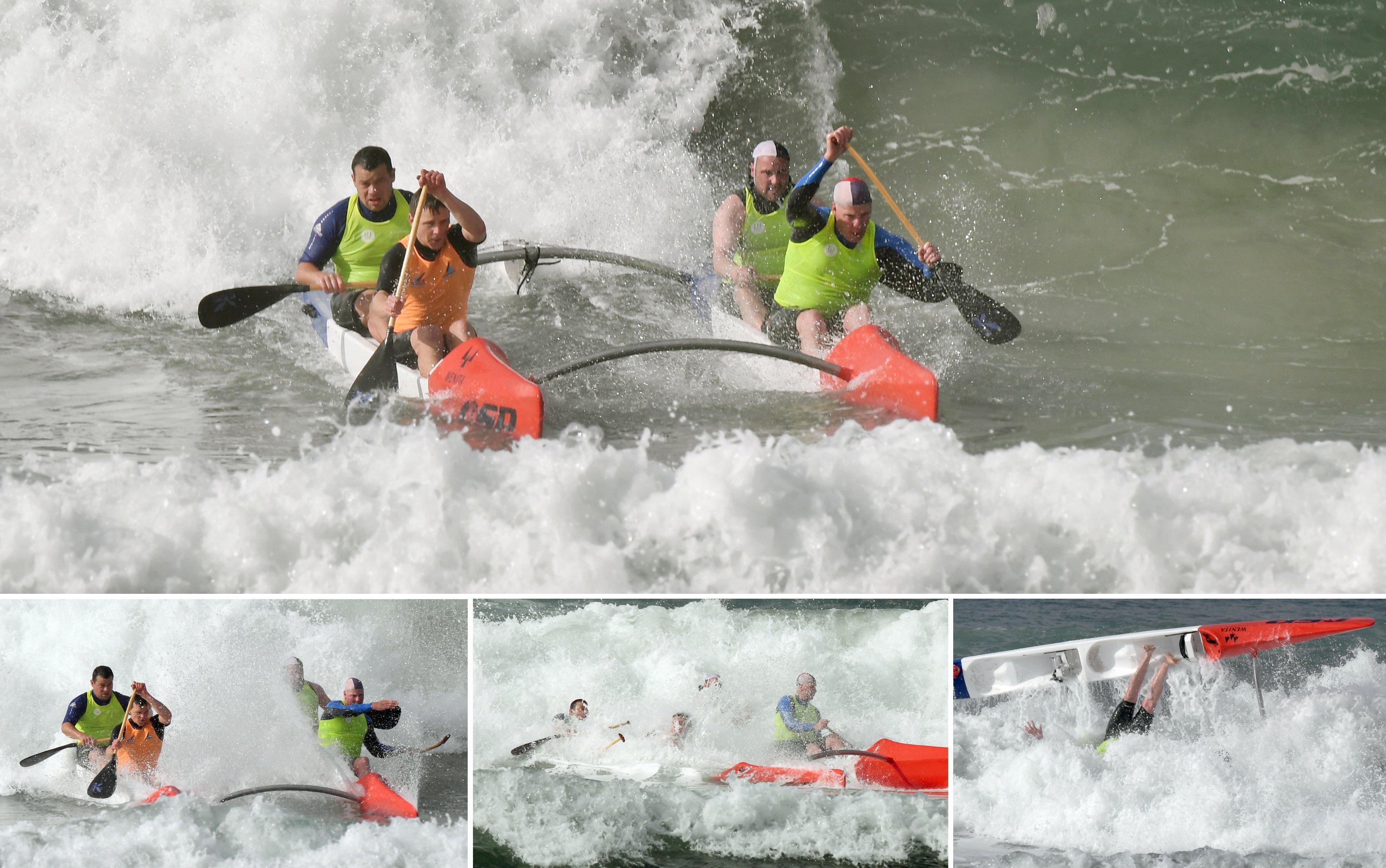 Warrington surf life-savers capsize during the return leg of the White Island Race last year. From left are Wyane Fa'asega, Michael Hastie, Tom Orchiston and Ken Mchoull. Photos: Stephen Jaquiery
The 2m dumping surf was breaking 100m from the beach and there was a heavy surge between the island and the rock.

Soon after the starting gun boomed on that first race, crews faced trouble. The South Brighton (Canterbury) surf boat was swamped on the first wave and had to return to the beach to empty out. After getting to the island and almost completing the race it hit rocks near the finish line, punched a hole in the hull and broke a sweep oar.

Two of the three powered "shark boats" that started in 1969 as rescue boats were knocked out by the conditions. St Kilda was the only one to complete the course with the competitors. St Clair withdrew with a damaged motor and Brighton was immobilised with a bent propeller.

The race has produced some remarkable performances.

In 1980 Olympic canoeist and Canterbury lifeguard, Geoff Walker, recorded the blistering run to White Island and back when he was at his physical best. Just a few weeks before he lined up for the White Island race, he and fellow canoeist Alan Thompson were competing for New Zealand at the Moscow Olympics.

For swimmers, the course is particularly punishing. Swimming in surf is nothing like swimming in a pool. In surf, swimmers constantly battle the waves and swells, which can seriously interfere with their breathing routine. There are no lane ropes to keep them on course so the routine is again interrupted by regular visual checks to make sure they are going in the right direction. On top of that, after five exhausting kilometres in seriously cold water (about 12degC) there is the heavy surf to negotiate at the finish line.

The first swimmer was in 1993, when Zane Kubala (St Clair) completed the course in 1hr 23min 5sec.

Age is no barrier for some competitors.

Bart Smaill, a life member at St Clair, competed in the inaugural race in 1969. His last race was in 2013, on a surf ski, when he was 74. Smaill celebrated his 80th birthday in April and had heart surgery in August but jumped at the chance to compete again in the 50th anniversary event this year.

Smaill and John "Spindles" Bryant (55) have entered a double ski. Smaill has been cleared to race by his daughter-in-law, who is a doctor at the Dunedin Hospital Emergency Department. But Smaill said if conditions are too rough, he will not compete. That decision was to be made today.

Graeme Newton (67) a life member at St Clair, first competed as a 19-year-old in 1970 in a surf canoe and has competed at least 45 times since then. He will start again this weekend in a double-hulled surf canoe with three other St Clair masters - Peter Haslemore (65), Greg Page (64) and Murray Haig (62). The four men are believed to be the oldest masters' canoe crew in New Zealand.

Newton said when conditions are bad, which they usually are, the race is a serious challenge, both emotionally and physically.

"In the early days we had no wetsuits and usually wore cotton rugby jerseys and shorts, which were useless in maintaining your body temperature.

"We were already cold by the time we got to the starting line and then we had to battle through the surf and slog it out to the island and back in absolute crappy conditions.

Just to the south of the island is a rocky reef and most competitors go through the 20m gap.

"That gap can be a real nightmare and once you are committed to taking it, you have to go like hell to get through in once piece," Newton said.

"If you end up in the water in the gap there is nowhere to go. The island is too rocky to climb and the rock is constantly covered in surf. The gap is a maelstrom of water like a washing machine."

The race has also become a family affair for several families.

Newton has competed regularly on a surf ski against his sons and nephews.

Gary Teear (Waimairi) competed in the 1974 and 1975 races, 43 years before his son, Fred, lined up for Taylors Mistake last year. Fred Teear was expected back again this year.

A stalwart from St Clair, Kel Williams, has paddled a canoe with his sons Brendan and Kris, while Brighton club members Don Shanks and his son Ryan, have competed together.

This year three members of one family will face the starter's gun.

Brent Wolf (59) will paddle a surf ski alongside his son Nathan (20), also on a ski. They will hit the surf 30 minutes after Max Wolf (17) starts in the swimming section.

The race marks the official start of the beach summer patrol season, when the beach is patrolled by volunteer lifeguards during weekends.

Craft, boards and skis start at 9.30am and swimmers begin at 9am.

Abandoned: 1982, conditions too dangerous at the beach and the harbour.

Among the crews to strike trouble were Brighton B and South Brighton (Christchurch). The drama began when the Brighton surf canoe was swamped and the South Brighton boat came to the rescue. The Brighton crew was transferred to the larger boat, and the canoe was abandoned. However, when still some way from shore, the surf boat also capsized, throwing both crews into the heavy surf. Right: Apparently up to his shoulders in water, but in fact just in a wave trough, Brett Leask (St Kilda) paddles his surf ski to victory in the 1974 White Island surf race.

In the 50 years the St Clair Surf Lifesaving Club has been running the White Island Race, one race has stood out.

A cold southerly blew and the skies were dark and grim in 1974 when the starting gun sounded over St Clair beach. Conditions were marginal at best. They were about to get a lot worse. Of the 15 starters, only four made it around the island - Gary Teear (Waimairi) and Brett Leask (St Clair) on single surf skis, the St Clair four-man canoe and a South Brighton (Canterbury) boat.

"They were really relieved to see me, because they thought I had disappeared."

A double ski paddled by Cyril Aislabie and Rob Bevin (Waimairi) was almost at the island when they were blown off their ski by the fierce southerly. The rescue boats had been disabled in the heavy surf and without them the pair had to swim after their ski as it rolled away in the strong wind. They decided it was too dangerous to attempt to round the island and headed back to the beach.

It was a day of intense drama and "could easily have been a tragedy", said race organiser Murray Wilson.

"I thought `this is not going to be pretty'. When we counted them up and they all tallied at the end of the race it was a huge relief."

The drama began almost as soon as the starting gun sounded. Two motorised rescue boats were put out of action in the heavy surf, which also took a toll on canoes and boats. Several returned to the beach to empty out and start again.

Within minutes the field was scattered from St Clair to St Kilda. Most were shivering almost uncontrollably, some were hypothermic and there was a lot of gear damage.

After the 1974 race, the club introduced a strict safety plan and made significant changes to the race protocols.

Inflatable rescue boats accompany all craft, including canoes, skis and boards and swimmers have their own dedicated rescue boat. All boats are fitted with VHF radios which transmit on the surf life-saving channel and are in contact with each other and the race controller. High-visibility fluoro safety vests are compulsory for all competitors.

- Ian Stuart is a former journalist with the Otago Daily Times and a former member of the St Clair Surf Lifesaving Club. He competed twice in the White Island Race before moving to Auckland.