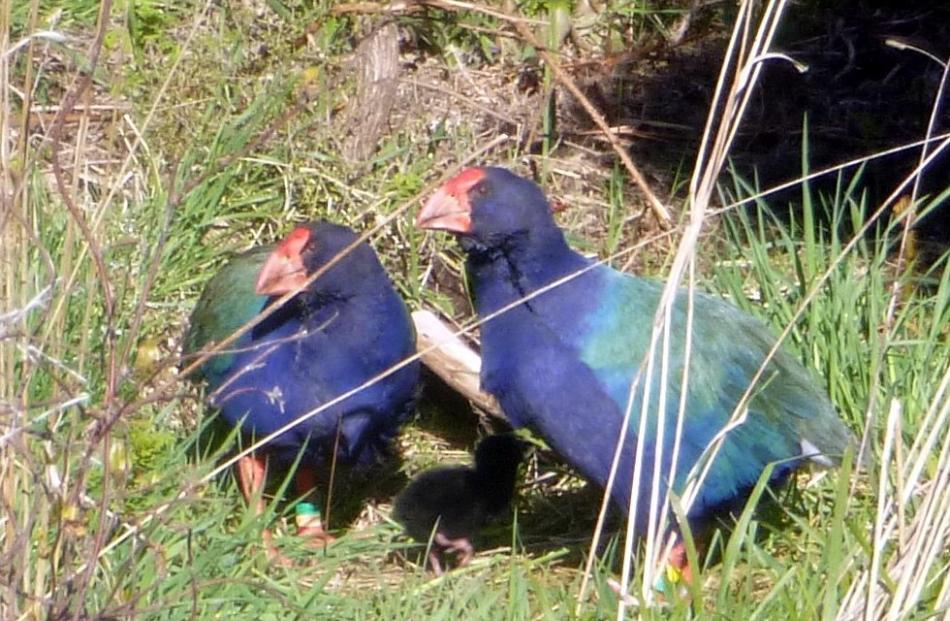 A first glimpse of watchful and wary parents Quammen and Paku with their new chick in the grasses. PHOTO: ELTON SMITH 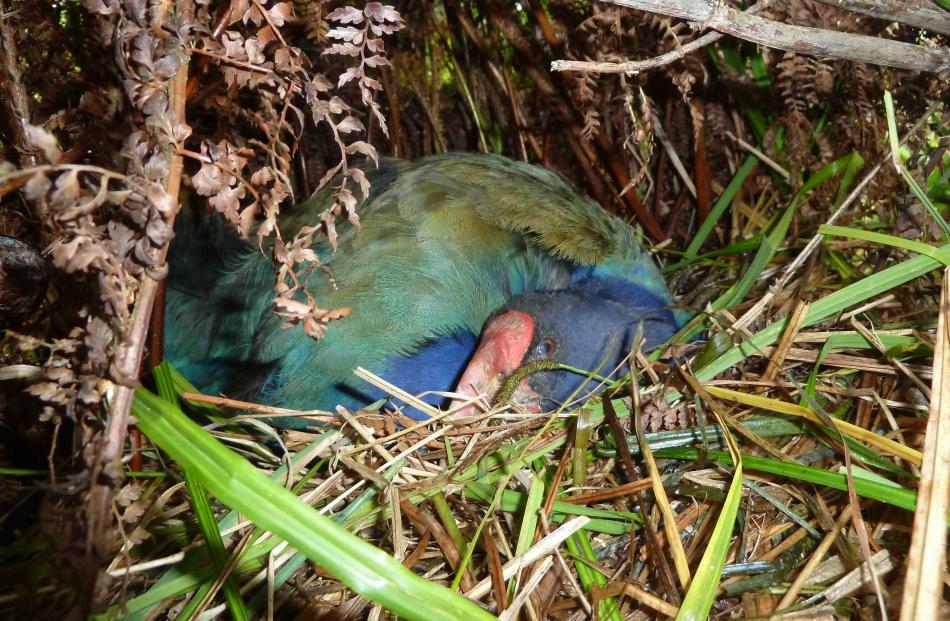 In an earlier failed attempt at nesting, Paku, pictured here sitting on her egg two weeks after its due hatching date, went unrewarded for her patience. PHOTO: ALYTH GRANT 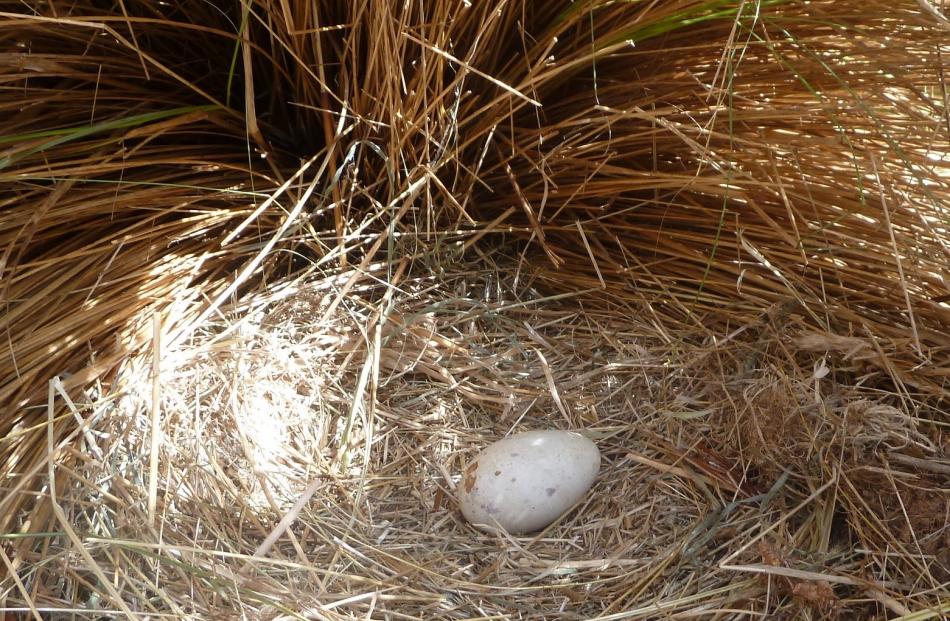 One of the infertile eggs in this year's nest, a simple construction under a tussock near their usual territory. PHOTO: ALYTH GRANT 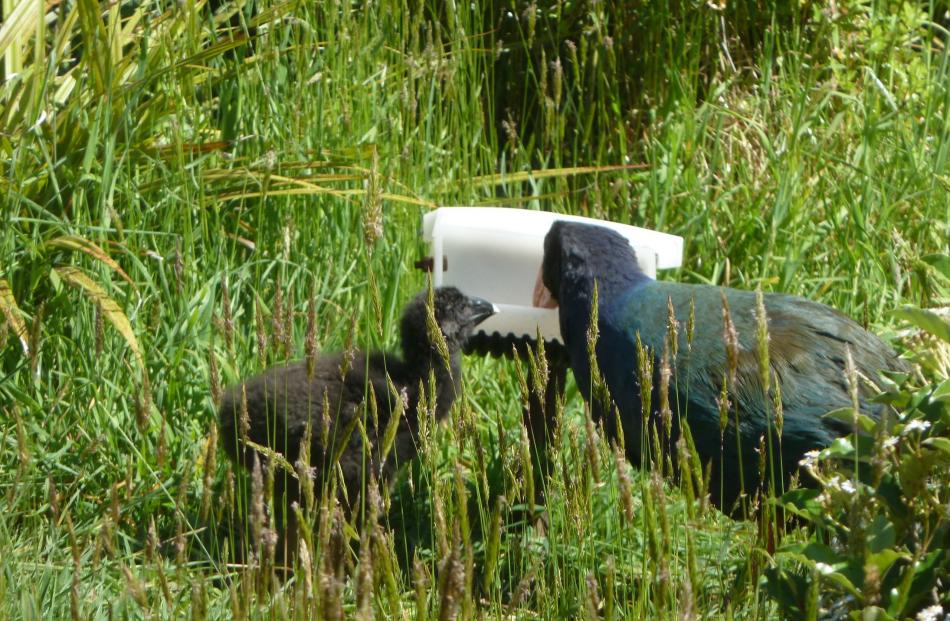 Quammen takes food from the supplementary hopper and passes it on to his chick earlier this week. PHOTO: ALYTH GRANT 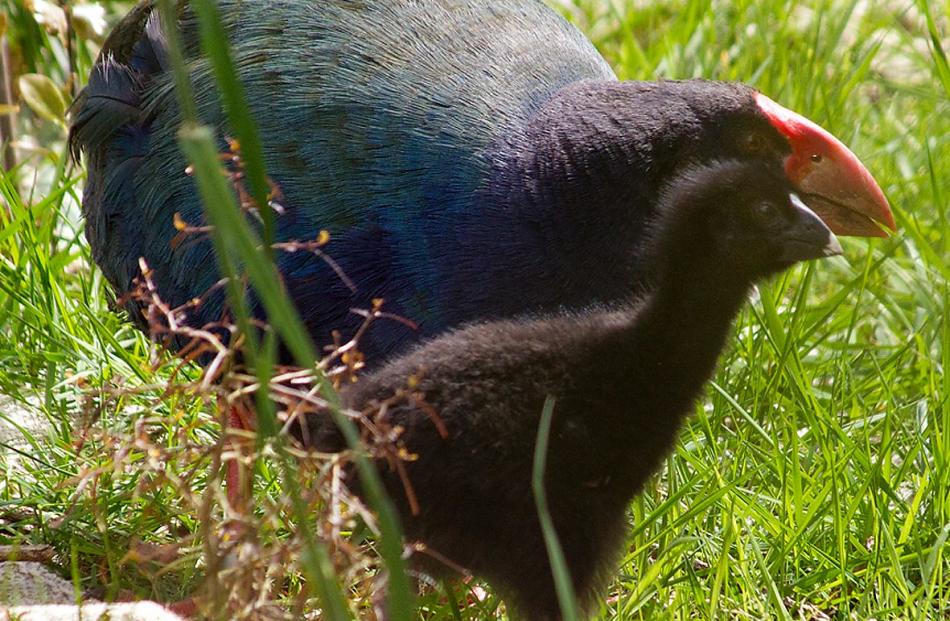 Three weeks after emerging from the nest, mother and growing chick step out confidently, content and thriving. PHOTO: PAUL SORRELL

At Orokonui a young takahe chick, carefully tended by parents and monitored by conservation staff, is getting to know its home. Alyth Grant reports.

Surrogacy is a controversial response to infertility. More couples grapple first with the moral aspects, then the practical difficulties of fulfilling the dream of becoming parents in this manner.

But when it comes to rare birds, there can be no doubt: it is one of the few tools available to us to stem the decline of a species towards extinction. Fortunately, the process for birds is much easier to implement than it is for humans: you take some fertile eggs from one bird and place them under an infertile nesting female, who does not recognise that the eggs she is now sitting on are not her own.

In due course, the necessary days of incubation complete, chicks hatch and the raising of the hatchling begins.

Such a story is taking place at Orokonui.

Paku and Quammen, the takahe pair so popular with visitors to the ecosanctuary, have become parents by this means. Although they bonded within a week of Paku's arrival at the ecosanctuary, sadly, they are infertile. But Paku's repeated attempts to nest - five times since coming to Orokonui - persuaded the Takahe Recovery Group to try her as a surrogate parent. Two fertile eggs were brought from the Department of Conservation's Burwood Bush Takahae Rearing Unit, near Te Anau, to replace the eggs Paku was incubating.

At last she has tasted success. She and Quammen are now busy caring for a four-week-old chick, the first hatched in this region for around 200 years. Paku took to the job immediately, and after a hesitant start, Quammen too has been observed on the job, diligently feeding his young one.

Such observations are necessarily made from a cautious distance, as the birds are both nervous and protective, taking their chick well away from potential human disturbance and making use of the thickest scrub to conceal it from natural predators, such as harrier hawks.

The supplementary food in their hopper remained largely untouched in the past month, as the birds instinctively turned to natural foods to feed their young. The rather dilapidated clumps of tussock grasses and small flaxes with lots of torn stems lying nearby are evidence of that. The nourishment is found at the base of the stems. The parent birds cut it up in small pieces and pass it to the chick, beak-to-beak. They also grub in the ground for invertebrates, to provide the chick with the protein needed for its growth.

However, more recently Quammen has taken to feeding his chick from the hopper. Taking food in his own beak and passing it on.

All this is a natural process, yet it has taken many resources to make it happen.

The science behind the recovery programme is vital. The genetic make-up of each breeding bird is recorded to avoid accidental inbreeding. Sponsors, such as Mitre 10 and Mitre 10 Mega, help cover the considerable costs of the programme. And creating appropriate habitat takes time and effort. At Orokonui, Speight's provided the funds for the plants, which our volunteers planted and cared for.

Seeing Paku make her nests in their tussocks and feed on them - to the detriment of the plants - has given them great satisfaction.

Eventually, Paku and Quammen will bring their chick into the open for all to see. It will still be dependent on them and will remain at Orokonui for up to a year, before being returned to Doc, and then released into the wild somewhere where it can meet an appropriate mate and play its part in the recovery of its species.

This year, through the surrogacy programme, breeding numbers are up by one bird, because the fertile birds at Burwood have since renested and produced two more fertile eggs, which are due to hatch any day.

Next year it is hoped to relocate a fertile pair to Orokonui, so that future egg swaps can take place on site, at less risk and less expense - a bonus for visitors, who would regularly see young takahe running around, and a bonus for the recovery programme, as Orokonui would then be integrated into it as a valuable additional breeding site.

• Alyth Grant is a volunteer at Orokonui and a trustee of ONHT.