Taking the joy out of gender 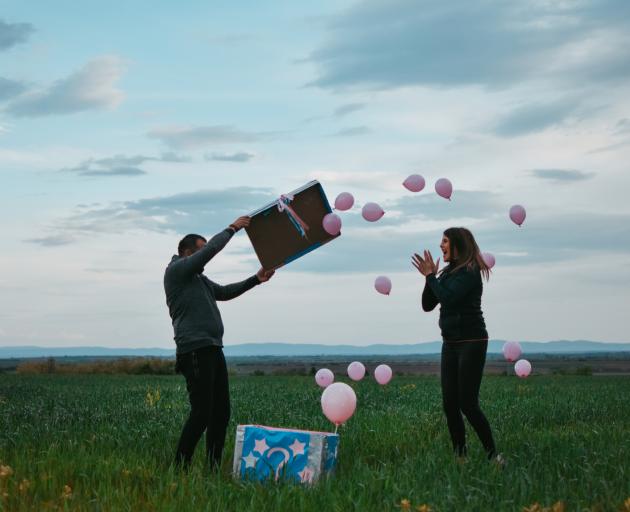 Photo: Getty Images
Celebrating the discovery of of your unborn baby's sex has been co-opted by people with repressive, polarised ideas, the woman who began the trend tells Rebecca Schiller.

In 2008, Jenna Myers Karvunidis was pregnant and itching to throw a party.

"Life is hard, but I like to have fun," she explains.

"I think it's important to mark moments of joy."

Karvunidis (who loves celebrating so much that she baked a cake for her goldfish's birthday) was determined to get her family "jazzed up" about her first baby. After the recent, much-anticipated birth of her nephew, her husband's family were less excited about this next grandchild and, with her own family emotionally and physically distant, Karvunidis came up with the then-novel idea of a theatrical reveal of her baby's sex.

During their 20-week ultrasound scan she asked her midwife to keep quiet about whether the baby was a boy or girl and, instead of telling the expectant couple in person, the bemused professional sealed a note containing the secret in an envelope. Karvunidis then baked two cakes in the shape of ducklings, filling one with pink icing and the other with blue - a discrete toothpick for differentiation.

Her family took some convincing to gather for a midweek party without apparent purpose, but as soon as the butter-cream duckling showed its contents - pink for a girl - everything changed. There were gasps, tears and someone shrieked: "I feel like she's been born!". In that moment the cake and the party did all Karvunidis had hoped to bring her pregnancy to life.

The arrival of Bianca (the eldest of Karvunidis's three daughters) was still months away, but that day she did unwittingly birth something: the gender-reveal party.

Her blog about the event was picked up by a popular magazine found in the waiting rooms of midwives and obstetricians in the area. The story spread, becoming a mainstream part of US pregnancies and taking an increasing share of the $US200-$1000 ($NZ300-$1500) couples there spend on their baby showers.

Celebrities have also acted as inspiration. In an Instagram video last year, announcing her third pregnancy, Kate Hudson, her husband and sons simultaneously pop a number of balloons, spilling pink streamers and confetti on to the grass. The family jumps up and down hysterically, screaming with delight and hugging each other as a cloud of pink drifts skywards.

Karvunidis is far from happy about what she unleashed. In late July this year, responding to questions on Twitter about her role in the gender-reveal phenomenon, she confessed to "major mixed feelings" and posted a family photograph featuring Bianca, the world's first gender-revealed baby, dressed in a suit. Striking a strong pose with her hands in her pockets, Bianca was sporting what conservative media outlets would describe as an "androgynous" haircut.

The story spread like the Arizona wildfire that last year destroyed 47,000 acres of forest, at a cost of $US8 million. Dennis Dickey, an off-duty border patrol agent, started that blaze with his gender-reveal stunt: shooting at a rectangular target marked "Boy or girl", which exploded into blue smoke before setting grasslands alight. It's not just the environmental recklessness of Dickey's reveal, and the increasing popularity of expensive and dangerous stunts, that bothers Karvunidis.

She's also concerned about what she calls "aggressive energy" being so caught up with the sex of a foetus.

"When you announce your son with a gunshot, or by wrestling an alligator, I think, how far are we going to take this?"

As a lifelong feminist, who has recently started law school, her unease about gender-reveals started soon after they began to take off - she felt the idea was becoming politicised by conservative forces.

"I feel like the guy who invented gunpowder," she half-jokes. Though Karvunidis accepts that the idea may have emerged, with or without her, from the cultural soup that surrounds pregnancy, she does feel some guilt.

Though Karvunidis's instincts led her to reject the gender-reveal shortly after she created it, it was her daughters' experiences of modern American girlhood that solidified her views. Karvunidis explains that she's always tried to model to her children that there should be no limits on what women can do.

"I've gone back to school, I started a business and I try to be that person - the boss - so that it's totally normalised for them."

But as Bianca has grown older she's been busy giving her mother an education in gender politics. Karvunidis's eldest is still just 10, uses she/her pronouns and considers herself a girl, but she has firmly rejected the idea that girls should dress or act a certain way and questions preconceived ideas about what gender means - something her parents have fully supported her in.

"Bianca tells me there are more than two genders and many sexualities. I hadn't considered all this before."

Thanks to Bianca, who Karvunidis calls a "bad-ass", she is now concerned that the parties she helped make popular are hurting trans and non-binary communities, a position shared by the many activists who have supported her stance.

"At least when the child is born you are getting all the information at once: the sex, the colour of their hair, who they look like, how long they are, what their heart rate is. With the gender-reveal you've isolated one aspect of this person. When it gets elevated as being central to your identity that's problematic," she asserts.

But Karvunidis's worries about the extreme bent of the gender-reveal don't stop there. Despite recent media focus falling on Bianca, it's the world that her more "traditionally girly" daughters are experiencing that really makes their mother feel guilty.

When middle child Stella was 3, Karvunidis bought her Lego for Christmas. The toddler sobbed on seeing it, declaring it a "boy toy" because it was primary-coloured rather than pink.

"Our nursery was painted blue and yellow," reflects Karvunidis. "We didn't hold gender-reveals for our younger kids, but this still happened."

She now believes the gender-reveal party has helped conservatives create increasingly restrictive pink and blue boxes for children, which support their anti-liberal agenda.

"I know I played a role in it and it makes me sick."

Her worries don't stop there.

"I'm pro-choice," she says. "What else am I going to be? I have three daughters."

In her eyes the gender-reveal has benefited those trying to curb women's autonomy.

"In the US, our reproductive rights are being eroded down to nothing. You'll have a 6-day-old ball of cells eclipsing an adult human woman's medical decisions. It's not a football player or a ballet dancer, it's a foetus, but the gender-reveal helps people forget that."

Prof Sarah Knott, author of Mother: An Unconventional History, says sorting people into one sex or another was a rigid and crucial part of the fiercely patriarchal society from which we descend. But our contemporary take (complete with highly gendered toys and clothing for newborns) is, she believes, something new. For centuries, infants were dressed alike and wouldn't have been differentiated by their clothing until later in childhood.

"It seems that we are more focused on quickly establishing a person's identity now than we were then," Knott says.

Where the gender-reveal is heading, no-one knows, but Knott reminds us that habits around pregnancy and birth can disappear as quickly as they appear.

Still committed to being a bringer of fun, Karvunidis wants a more inclusive, tolerant and liberal world for her children - but not at the expense of joy and celebration.

"I don't want to shame people for having a party. I hope everyone has cake when they want it," she laughs, "but let's just eat it in socially appropriate ways."