A veritable plethora of penwipers 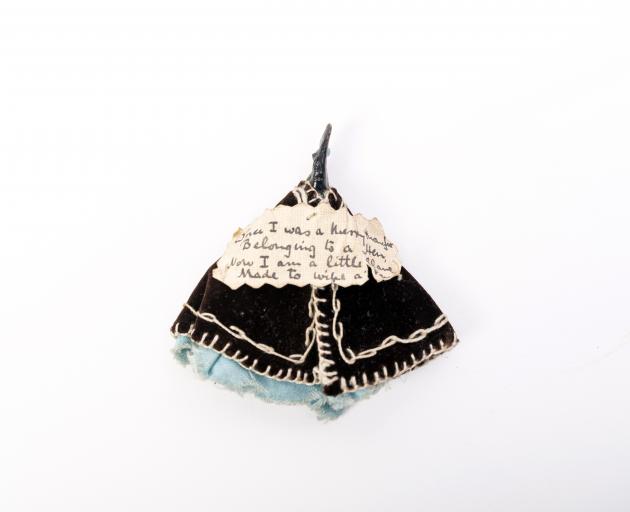 Before gel pens, before rollerball pens, before ballpoints, there were fountain pens and, even earlier, quill pens. Nibs that were dipped into inkwells needed to be kept clean. Penwipers were a standard part of writing-desk equipment in the 19th and early 20th centuries.

Domestic craftspeople made a wonderful variety and volume of novelty penwipers, which seem to have been a staple of fundraising bazaars. At an 1896 fair for the Nelson Aid Society, Mrs Willis and Miss Franklyn won awards for the most original and the most artistic penwipers. Directions on how to make examples in the form of butterflies, miniature teapots, parasols and apples appeared in New Zealand newspapers. 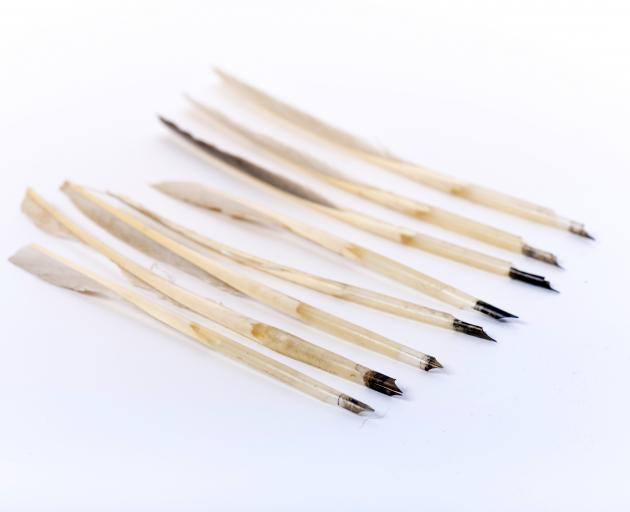 Quills. Late 19th to early 20th century. Gift of Helen Moran; Otago Museum Collection.
There were penwiper cartoons and jokes, often at the expense of the women making them. Some made fun of women's fashion at the same time, such as this 1895 offering: "That was a pretty penwiper you were kind enough to leave on my desk," said Mr Chugwater to his wife. "It's very ornamental, if it is a trifle small."

"Oh, Josiah!" shrieked his wife, as her husband drew his pen through the dainty pieces of ribbon, "you've ruined my new bonnet!"

The penwiper on display in the est. 1868 exhibition at Otago Museum is a variation on the small dolls created using a chicken wishbone (or merrythought) frame. A 1912 writer described them as "an amusing present for an unimportant occasion". They advocated painting the "feet" black for boots, and the top black, as for a cap. Clothed in a cape with underlayers of black fabric (so the ink marks wouldn't show) it has a small verse attached: "Once I was a merry-thought / Belonging to a hen / Now I am a little slave / Made to wipe a pen."

It came to us in 1953 from Helen Moran, a gifted embroiderer and embroidery teacher, part of a generous donation of textile-related material.

'Humour' was unfunnily at the expense of women and impenetrable:
'My wife, she is far from Radiant, but she does write with the Stephens India Ink!'