the bridge over the estuary offers a peaceful view back up the Orokonui valley to Mihiwaka. Photos: Alyth Grant
Alyth Grant takes a closer look at the Orokonui Stream as it passes through the Ecosanctuary and beyond. 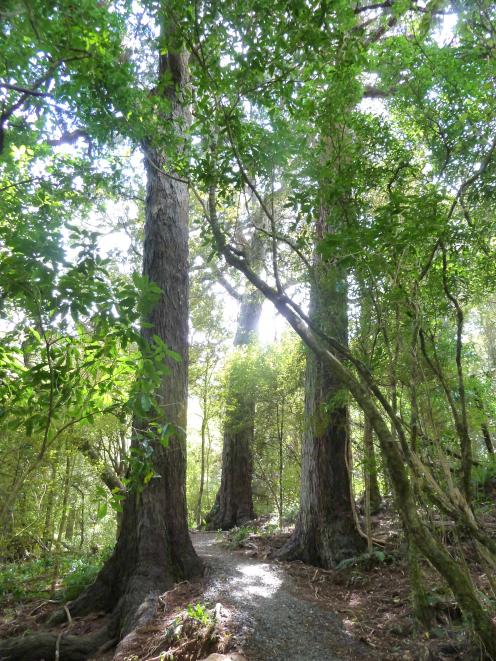 These three impressive Rimu, known as "The Guardians", are best seen when climbing the track, not far above the seat.
Water is the source of all life. A truism, to be sure. Nevertheless, the Orokonui Stream gives not only its name, but life itself to all the flora and fauna of the Orokonui Ecosanctuary.

Having gathered the run-off from the hills around the steep-sided Orokonui Valley, the stream enters the ecosanctuary just below Blueskin Road, accumulating water from tributaries on its descent through the bush, and leaving the sanctuary again to merge with the Waitati stream at the estuary on Blueskin Bay. It forms the central seam of the cloak of bush that clothes the valley from the peak of Mihiwaka almost to the shore of Blueskin Bay, the Korowai o Mihiwaka, the name given to the ecosanctuary by Kati Huirapa of Karitane.

In its upper reaches, the stream is hard to find. Only the teams doing pest monitoring encounter it, clambering down slippery banks to cross it. Few visitors wander along the pretty Fuchsia Gully track that leads from the Clearing to the stream, but those following the Robin Valley track downhill gradually approach it through kanuka forest. Here robins suddenly appear at one's feet, and riflemen can be spotted as they run up and down kanuka trunks, poking their beaks behind the loose bark in search of invertebrates. 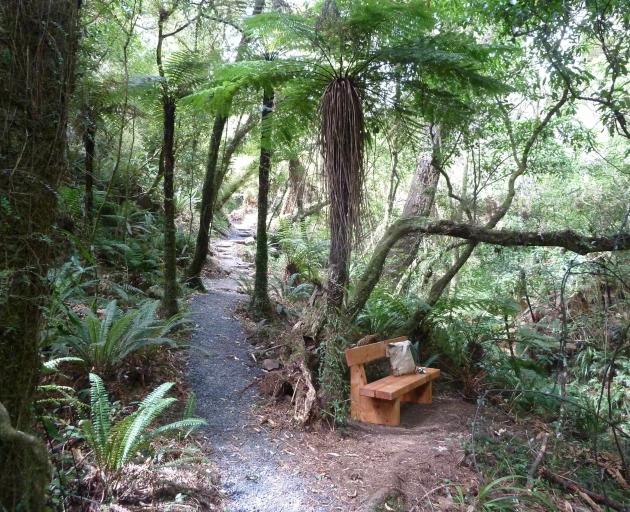 Halfway to the valley floor is a bench inviting the visitor to rest awhile. It stands in the midst of magnificent aged rimu. The stream is now audible, just below, but still hard to see, as the bank is steep, tree-ferns hang out over the water and mature trees block out the sun. Take a moment to sit, meditate, look and listen for birds. A kaka may be silently tearing bark off a branch above as it searches for the nourishing sap.

Lower down the valley three bridge crossings allow a better view of the water. In the dryness of recent months it has been little more than a trickle, belying the torrent it can become in the worst of winter weather.

Near one of the bridges an information panel describes the native fish species that can be found in the stream. At low water it is hard to believe that anything much could live there, yet an investigation some years ago by Ruth Clucas of Doc established the presence of banded kokopu, koaro, redfin bully, longfin eels, and koura.

Further on you may spot an indistinct semi-circular track that will take you close to the water's edge, along a bank dense with ferns. In late spring spider orchids can be found there, and in damp weather filmy ferns. 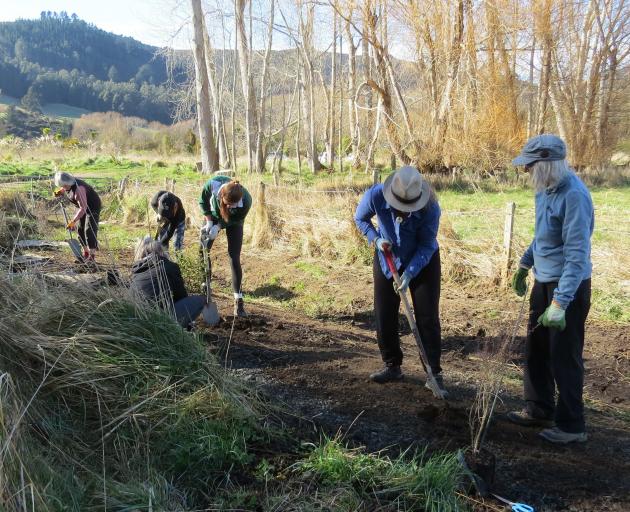 It's the first day of spring, and the volunteers are out planting near the estuary.
In a storm the Orokonui stream, like the Leith and Lindsay on the other side of the hill, can become a raging torrent. The gates set into the culverts at the bottom of the sanctuary are designed to open to let floodwaters flow through, shutting again automatically. But more than once the flood of water has threatened to carry away the fence itself, and it is believed that the gates, if jammed open by debris, can provide access to the two most feared intruders, rats and stoats, neither of which is water-shy. So a great deal of engineering thought is being given to an improved design that will keep them out, yet still make it possible for our migratory fish to move both upstream and downstream as their life cycles require.

Having passed through the messy but wonderful eucalypts and stopped to admire the tallest of them, New Zealand's tallest tree, you will soon reach the bottom pedestrian gate. Stop awhile on the sunny seat here and watch and listen. You may see kaka flying over, a tomtit flying in to a nearby branch, fantails flitting about you and in the eucalypts you will hear the chatter of eastern rosella, all against a stereo chorus of bellbirds. 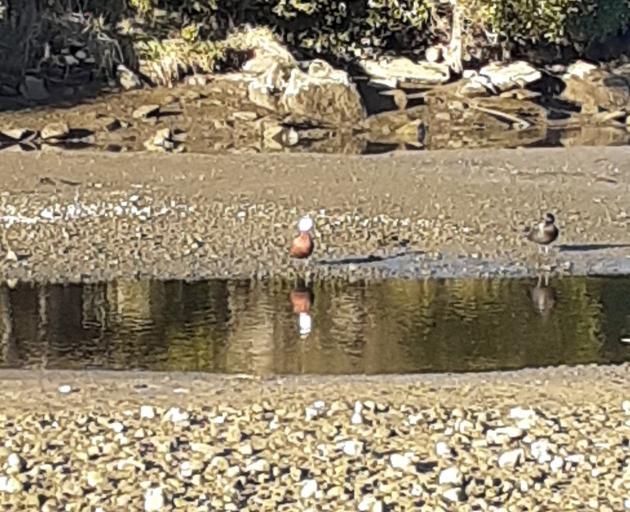 Numbers of paradise ducks can be found feeding at low tide.
The pedestrian gate leads out of the sanctuary, but it is not the end of the stream's journey. Via an avenue of native trees bordering it you will eventually reach the tidal estuary, home to many pukeko and paradise shelducks. The area is flood-prone, and consequently difficult to re-vegetate. But that is happening. By way of celebrating NZ's hosting of the Rugby World Cup in 2011, Doc launched one of its "Living Legend'' projects here. In one weekend Dunedin families planted several thousand trees, shrubs, flaxes and other small, salt-tolerant natives to improve the habitat for shore birds. And by acting as a filter, they will also improve the quality of water flowing into Blueskin Bay.

Since then a small group of volunteers has laboured to keep the plants free of weeds and have planted many more, replacing those lost to the flooding streams. Slowly, many have established well, enhancing the estuary walkway Waitati residents have come to love. If you follow the stream to the bridge over the mouth of the estuary you will likely see kingfishers perched on the wires above, or even a seal following the inflowing tide in search of a meal.

As the plantings of the estuary area grow, creating a fringe to the Orokonui valley's korowai, the biodiversity will increase, attracting, it is hoped, the return of more of the seabirds that once were found here.

Alyth Grant is a regular volunteer at Orokonui.