‘‘In the morning the weather was quite changed, a cold S.W. wind blowing, with frequent showers of hail, which made the drive in to Dunedin in Cobb’s coach a very disagreeable one.’’ PHOTO: COBB AND CO. COACH, PALMERSTON, OTAGO, 1876-1885, PALMERSTON, BY WILLIAM HART. PURCHASED 1981 WITH NEW ZEALAND LOTTERY BOARD FUNDS. TE PAPA (O.000997)
In the years immediately following the Otago gold rush, readers of the Otago Daily Times and Otago Witness were treated to a series of lively accounts of "rambles" around Dunedin and its hinterland by Peter Thomson (1823-79), an Otago Daily Times proof-reader and pioneering naturalist. Writing under the nom de plume "Pakeha", Thomson’s detailed descriptions of botany, vegetation, clearance rates and suburban development are regarded as among the best contemporary records of Dunedin. A collection of Peter Thomson’s published articles has been compiled by his great-granddaughter, Mary Skipworth, and can be viewed at http://genealogy.ianskipworth.com/pdf/peterthomson.pdf  In this, the final part of his holiday walking to the Tuapeka goldfields, we join Pakeha about to head home — but not before first visiting the Chinese camp near Lawrence.

IN the afternoon I went to visit the LAWRENCE COAL PIT which is under the management of Mr K.

Gunn, who met me at the shaft, and accompanied me down the pit and through the workings and galleries. The pit is 105ft deep, and is situated on a flat a little to the south of the town. The coal is of pretty good quality, easily burnt, and contains a considerable quantity of retinite. The seam is of great thickness, but only seven or eight feet are worked at present. There is a brickwork on the premises, by which the small coal is utilised, and very good bricks are turned out.

In the evening, went to visit the CHINESE CAMP on the bank of the river below Lawrence. Though not so numerous as formerly, there are still a good many Celestials living here. Some of them are married, and I saw some children running about—funny little things.

Went into a gambling house, and saw odds or evens played Chinese style. The player took up a handful of small counters at random off a heap, and those standing betted their coins on the handful containing an odd or even number. It seemed perfectly fair. From this went into the Chinese Empire Hotel, kept by Chinese, one of whom is married to an English woman, who served in the bar. Then up to Lawrence to the hotel, and to bed.

Next morning started off to reach Greenfield Station, near which there is a punt ferry over the Clutha River, fourteen miles to the S.W. of Lawrence.

This walk was over a series of ranges almost similar to those I had traversed from Waipori. The track rose considerably over the level of Lawrence, until at a place called Breakneck it reached about 1000 feet. From this point the road neither rose nor fell much for a long stretch. Fine views of the surrounding ranges of hills were had from every turn.

After I had proceeded some eight miles I was to look out for a shepherd’s hut, where I was to get directions for the remainder of the walk. This hut I duly found, and received most precise and prolix directions; but as these all hinged on my finding an iron gate in a fence, and as I never found the said gate, the directions went for nothing.

Consequently, instead of finding myself at Greenfield, I found my way to TUAPEKA MOUTH There are a few houses scattered about, some of them unoccupied. This was once a very stirring place, there being a large population scattered about, mostly diggers. But these have all gone long since, and the principal industry at present is an extensive sawmill a little way up the river, supplied from the great forest covering the Blue Mountains on the other side.

‘In the evening, went to visit the Chinese Camp on the bank of the river below Lawrence. Though not so numerous as formerly, there are still a good many Celestials living here.’’ PHOTO : OTAGO WITNESS
The cutting of the logs and rafting them down to the mill, a distance of some six miles, employs a good many men; and as the mill turns out not only the ordinary sawn timber but planed boards, tongued, grooved, beaded, etc, for the supply of the townships on the diggings, a force of bullock drivers and team is always about the place.

Next morning I went up to see the sawmill, and the manager, Mr Pearce, kindly showed me all the appliances at work. It is driven by a horizontal steam engine, and produces large quantities of timber of all sorts. After doing the mill I went up the bank to a patch of bush to see what the botany of the district contained. However, there was only the wreck of a bush, all the timber having long been removed, and nothing left but the usual scrub. 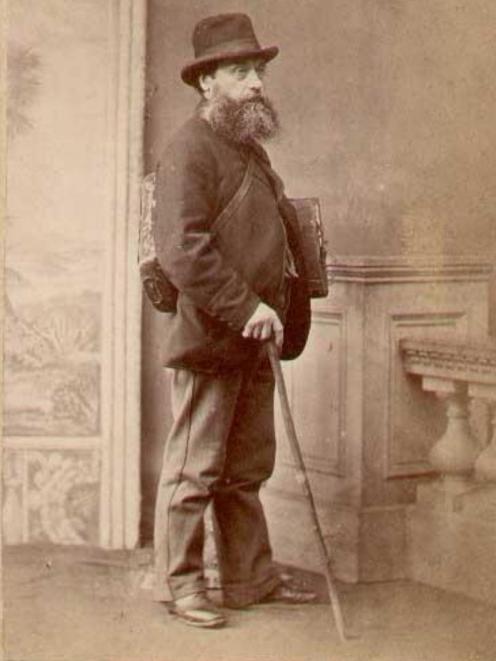 Proceeding farther up, I came to a fine farm, with a house and extensive orchard, the trees loaded with fine apples, etc. Plenty of fine pot vegetables were also growing, as well as potatoes. There was no-one about, and I might have helped myself. Just behind the house I had a very fine  view of the great gorge through which the river flows. There are several rocky islands in the channel, and the river comes sparkling and dashing through them in the most lively manner at about five miles an hour. The ground is high on both sides, and the great Blue Mountain range frowning down on all makes the place very romantic. Had time permitted I could have stayed all day admiring the scene. But I had a long walk yet before me, so returned to the saw mill, where I had dinner with Mr Pearce. Immediately afterwards I went off to see about a boat to put me across the river, as I had seven or eight miles down the other side to go. I found a Charon in the shape of a lady named Campbell, who agreed to ferry me over.

So after getting my traps from the hotel, I went on board and was soon landed on a sandbank on the opposite side, from which I had no difficulty in making my way up to the terrace of varying width which forms the river bank all the way down to CLYDEVALE where I arrived before five o’clock. On making myself known to Mr Mitchell, the manager, I was at once made welcome.

This station belongs to "The Company", as it is termed the neighbourhood, and consists of two establishments — upper and lower—the one devoted to the production of wool, the other is a large farm, employing 60 working horses, and having this year about 30,000 bushels of grain to dispose of. The station buildings are very pleasantly situated on a gentle rise a short distance from the Clutha, which is here divided into two branches by a long, rocky, bushcovered island. A very pleasant prospect is had from the windows, extending over a great extent of country, of very diversified surface. In the evening I had a very enjoyable walk among the fields, which was quite a treat after the bare barren hills I had been so long among.

Next morning started early, and reached the Royal Mail Hotel at CLINTON or Popotunoa, as it is often called. I strolled off to explore the bush on Popotunoa Hill, on the other side of the valley from the township. Passing up between the wooded hill and a low bare one, I entered the bush, which I found very scrubby, the large timber having all been cut down long ago. Just inside the trees there is a house in ruins, beside a very nice garden, the position of which is very pretty, and commanding an extensive look out. This was formerly the residence of Mr Clapcott, when the surrounding country was occupied as a sheep-run. From the house a path had been cut, winding up the side of the hill, through the trees, but now so much overrun with a secondary growth of fuchsia and mokomoko, that it was with difficulty I could make my way through it. I tried the bush at various places for plants, but found nothing worth carrying away, and there was only the commonest ferns. The undergrowth on the top of the hill was very dense, and this, combined with the tops and branches of fallen trees, made progress very difficult; so, after working in various directions without finding anything rare, I crossed the hill and came down on the opposite side to which I went up.

The rest of the evening was spent wandering about in the vain expectation of some conveyance turning up, by which I could get down another stage.

In the morning, I started immediately after breakfast, and kept up a steady slog till I reached the Waiwera Hotel.

BALCLUTHA was my destination for the night, lying sparkling in the sun, with the Clutha appearing here and there in fine reaches. The view from this point is unrivalled. I felt as if in sight of port after my week of wandering. I had not lain a couple of minutes when the rattle of wheels was heard behind me.

I started up, and there, coming along a branch road towards me, was a buggy with one gentleman in it. Getting down to the side of the road and hailing the occupant, who was no other than Dr Smith, was the work of a moment.

I was kindly asked to jump up, and was whirled off to the Ferry behind the Doctor’s well-known fast-trotting ponies, and dropped at my friend’s door in a very short time.

I had not been long at the Ferry when heavy rain began to fall, and continued nearly all night, preventing any outdoor work being done.

In the morning the weather was quite changed, a cold S.W. wind blowing, with frequent showers of hail, which made the drive in to Dunedin in Cobb’s coach a very disagreeable one. Some of the squalls were very heavy, and penetrated the curtains of the coach as if they had been made of paper.

However, the longest road has an end, and Dunedin was reached at the usual hour.

I must add a paragraph about the paucity of animal life in the parts of the Province I had travelled over. I hardly ever saw any birds. Rabbits crossed the road on Maungatua; there were a few gulls at Waipori, Lawrence, and at various points on the Clutha; the weka was seen in Munro’s Gully, the ranges between Lawrence and Tuapeka mouth, and in the bush at that place; the grubbings of wild pigs were observed on the Clutha bank, among some fernland; a covey of partridges, rose from the stubbles at Clydevale; and there were some pigeons in the Popotunoa bush. These, with the exception of some smaller birds in the bushes, were all that I noticed—a very small variety, considering the distance, and the different nature of the country passed through.

I now conclude, thanking all those who helped me over the various difficulties met with during my walk.