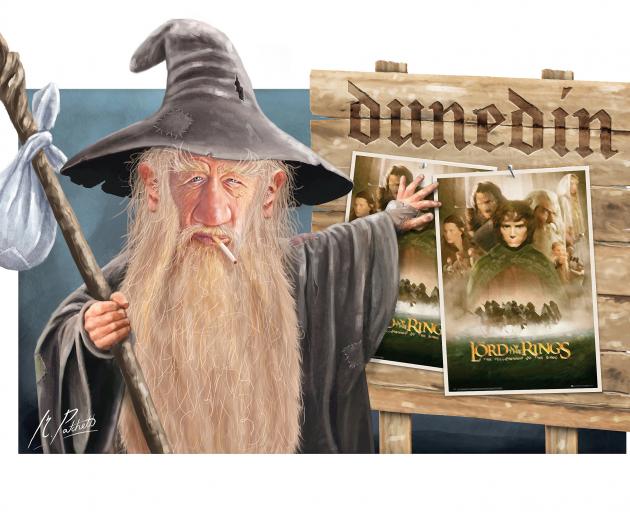 The University Book Shop short story series brings you three stories in which local writers relocate famous fictional characters to Dunedin, and send them on twisted adventures. Yesterday, Frodo Baggins met his old chum Gandalf. Today, the pair begin their search for a way back to Hobbiton, in this tale by David Loughrey.

Frodo held the flattened pamphlet on the park bench and searched for clues that might help him find his way home.

He read aloud: "Join us and experience the real Middle-earth at Hobbiton, where, in the heart of New Zealand’s farming countryside, you can step into the lush pastures of the Shire."

He had read it 100, perhaps 1000 times before, but there was such hope in the sentence, Frodo felt the same warm rush he had felt the very first time he had seen the words placed so artfully together.

It was time for action.

He felt the call of home so strongly, and even if he did not yet know how to get back, surely somewhere in the city there would be a clue, perhaps news of his old friends, the ever faithful Samwise Gamgee, Pippin or Merry.

He stood and called for Gandalf to do the same, helping him with his bag of tobacco dregs and half-smoked cigarette butts, finding a pocket in his coat to hold them, waiting while the old wizard took a sip from a hipflask he held tightly in his hand.

Together the pair set off on Princes St towards the city centre; under grey skies they passed the Salvation Army shop and a luxury car dealership, a needle exchange and a second-hand bookshop.

Frodo felt hope, just in the action of moving, felt for the first time in a long while he was again on a quest, with a reason for being.

He chatted happily away to a silent Gandalf, told him of his plans for when he got home, the parties he would have, the presents that would be shared.

Despite his chatter, Frodo kept a sharp eye out for a clue or a sign, and it was not long before he found one.

To his right, across a car park by a busy five-way intersection he saw it; he saw Aragorn first, his steely blue-grey eyes staring out and his sword held aloft, so proud, strong and serious.

He saw his younger self, all action and intent, his lips full and his eyes keen, he saw Samwise and a host of other images from Middle Earth all crammed together and drifting in two dimensions.

"The Lord of the Rings" he read aloud as he reached up and touched the base of the giant poster with dry, cracked fingertips.

Frodo’s thoughts began to tumble over themselves, the images seemed to dance in his head, the eye of Sauron glowed malevolently in darkened tracts of his mind, and his heart beat arrhythmic and agitated, a subversive background rhythm.He turned to Gandalf, who for the first time was showing signs of animation.

The wizard lifted his hipflask to his dry lips and took a swig, wiped away moisture that formed in deep ravines by his mouth, grabbed Frodo by the shoulder and pointed in the direction of the city centre.

Frodo felt his excitement rise to a level almost too much to bear.

He tried to speak, to tell Gandalf, tell anyone, of the turmoil, the ferment that was rising inside him, but his words came out a jumble of sounds.

He felt stranded on the busy corner, and noticed passing eyes in passing cars look strangely at him, saw their fear and disdain as they swept by.

With little else to hold on to, he gripped Gandalf by the sleeve and dragged him across the intersection towards the city.

Frodo felt exposed; he missed more than anything the feel of the ring safely in his pocket, the power and the anonymity of its touch.He missed the companionship of his fellows, other hobbits, those he could trust.

It was Samwise, his gardener, his closest and most dependable companion, his friend.He took his old chum by the lapels and drew him to him, kissing him on the head, overjoyed despite a lingering bitter odour to be again physically close to the hobbit who had pushed him on in the past, even carried him when he was too weak to go on.

Now they were three.

Again emotions swirled dangerously within him; the light was harsh, the light was bright, the city’s buildings began to project their own auras, some inviting, some dark, some foreboding.

The ground shifted beneath Frodo’s feet and his stomach dropped away beneath him into a canyon of emptiness, where the possibilities were endless and unspeakable.

He gripped his arms, defending his understanding of reality, bringing himself back to the moment.

The return to Hobbiton was key; to get back, to be safe, to plan, to bring hobbits and elves and men together again to fight for everything good and decent.

He turned to look at his friends, to draw from them the courage to carry on, and saw Gandalf was now standing taller, his skin, which had been grimy with dirt and sweat, was now smooth, translucent, his bearing more regal and his shoulders square.

Samwise was standing squat and resolute in his cape, his bed roll on his back and a sword in his hand.

Gandalf was pointing over Frodo’s shoulder, his eyes alight, and when Frodo turned he saw a building, a bright facade and garish advertising.

He rubbed his eyes, not believing.

Streaming through eight doors of glass and wood were elves, hobbits, more than one Gandalf and a host of orcs, talking together and laughing, all eager to see whatever was inside.

Frodo’s brow furrowed and his eyes squinted as he tried to take in this strange sight, to understand why friend and foe alike were in this place, but whatever the cause — perhaps Middle-earth now lived fully in peace — he knew he was near home.

He grabbed the arms of his two chums, ready to guide them past the final steps to home, when he saw him.

Frodo saw the cruel blue eyes, now with tinges of luminescent green, the closely cropped hair, the powerful frame, and a familiar sense of dread overtook him.

The scourge of his boarding house, the bane of his existence was standing just to the left of the doors, smoking a cigarette, and there was no escape.

As Frodo stared he saw new features on the face of his foe; his skin was tough and dark and leathery, his ears were drawn back and pointed, his teeth were sharp and vile and filthy.

Blocking his path was an orc, a murderous foot soldier of the Dark Lord’s army.

Frodo could see the glint of recognition in the eyes, see the lip curl with vicious mockery as he beheld the three standing arm in arm.

"Oh look," the orc spat, moving in front of the swinging doors, "it’s the little hobbits and the funny old man.

"Where do you think you’re going?"

Frodo looked beyond him, through the glass doors where he could see his people filing into the building, and a searing rage rose within him at the thought this loathsome brute was standing between him and his people, his home, his destiny.

Drawing on the last vestiges of a long forgotten courage he drew himself to his full height, such as it was, and with a scream of fury launched himself at his opponent.

The surprise and intensity of the attack knocked the orc off his feet, and together the two crashed through glass and splintered wood on to the carpeted floor, Frodo punching, kicking and gouging at his larger foe, grabbing at his throat and squeezing with all his might, all the while revolted and nauseated by the closeness of this vile being, his stench, his hideous wet skin.

But as the vigour of his initial parry faded, Frodo found his grip weakening.

The orc wrapped his clammy fingers round Frodo’s arm and twisted it painfully behind his back, the searing pain as his shoulder cracked enough to force Frodo on to his back.

Frodo jabbed with his fingers, his nails scouring flesh and drawing blood that flowed warm into his palms.

But the vile creature, its superior strength and weight now coming into play, forced its way on top of him and bore down, and Frodo, to his horror, quickly realised the very life was being squeezed out of him as strong hands with the grip of a vice wrapped around his neck.

His strength was fading fast and Frodo saw his world fade and turn red then white, the heavy breathing and grunting of the orc seemed far away, and his consciousness was fast slipping when he heard a treasured voice.

Sharon Paterson heard the crash of breaking glass, heard a yell and saw the look of alarm on the faces of her customers at the same time.

She hated theme nights at the cinema, they always brought out the weirdos.

It was with a feeling of intense irritation she remembered she was duty manager, responsible for the situation despite her low wages.

Sharon put down the ice cream she had just taken from the freezer, stepped from behind the counter and walked towards the entrance of the cinema.

There she saw a surreal scene; a tall, shabby man in a broad-brimmed hat, smoking a cigarette, was peering through a broken door pane.

To his left, standing in a pile of broken glass, was a short, ragged man with some sort of brochure or pamphlet in his hand, standing in front of a poster for the Lord of the Rings film night, yelling and pawing at the pictures.

She took out her phone and called the police.