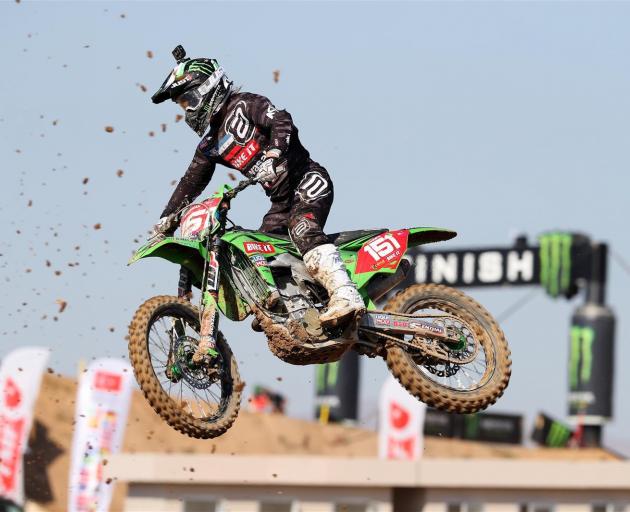 Courtney Duncan crosses the finish line in Turkey to claim a comfortable win in the penultimate race of the 2019 Women’s Motocross World Championship. PHOTO: GETTY IMAGES
In the Next 10 we select Otago’s greatest sporting moments during the past 10 years. Reporter Adrian Seconi continues the series today with a look at a tenacious champion, two snow bunnies and a golden leap.

You know the one.

"I get knocked down, but I get up again. You are never gonna keep me down."

It is hard not to get that tune and those lyrics stuck in your head when thinking about Courtney Duncan’s breakthrough series win in the women’s motocross world championship in 2019.

If there was ever an athlete who could make that their theme song it is the Palmerston Flyer.

Duncan completely dominated the competition that season. She won nine of the 10 races to claim the title with a race to spare.

That makes it sound awfully easy, but her back story provides the counter narrative.

She had been the fastest rider on the circuit since her debut in 2016. No-one could match her pace, her courage and her determination to get to the front and stay there.

But luck was not riding pillion. Her rookie season was blown up when she barrelled into a photographer who had wandered a little too close to the action.

Glory proved elusive the following year when she led the penultimate race of the season but was forced to swerve to avoid a pile up on the last lap and crashed.

A decision to award her the points for first place was reversed after an appeal and that saw the title slip out of reach.

It was not third time lucky, either. She was forced to pull out in 2018 with an injury when she had an enormous series lead.

Courtney’s mother, Linda, summed up the feeling best during an emotional welcome home at the airport.

"It took its toll on her [those first three years]," Linda said.

"And that is what I admire. She dug in until she got what she wanted."

She has now won the last three titles — proof you really cannot keep her down.

But there they were, both just 16 years old and competing at the 2018 Winter Olympics in PyeongChang.

And they were about to make history instead of learning it.

Sadowski-Synnott was the opening act in a wonderful double. The snowboarder nailed a switch backside 900 with a stalefish grab on her second run.

Still no idea what that is but it was pretty to watch. It also helped her win bronze in the women’s big air to became the first New Zealander to win a medal at the Winter Olympics since Annelise Coberger won a silver medal in the slalom at the 1992 Games in France.

"That second jump, I think that’s the best I’ve done it ... so I’m just so stoked," Sadowski-Synnott said shortly after the event.

She scored 92 with the jump to move into the bronze medal position. Sadowski-Synnott fluffed the landing on her last jump but had banked enough points to get on the podium.

A couple of hours later, Nico Porteous took his turn on the big stage in the men’s ski halfpipe.

He also came up trumps on his second run to help claim bronze and lift New Zealand’s all time tally to three medals.

Porteous scored 94.8 to briefly move to the top of the leaderboard with an "insane" run. His words. And they were fitting.

Porteous had been so nervous he vomited several times before dropping in for his run.

"That was insane to see that score come up on the board. I couldn’t take that smile off my face the whole way up the chairlift," he said at the time. 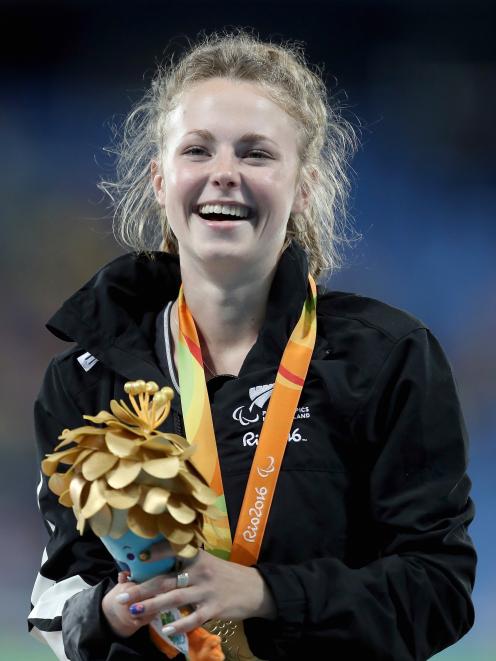 Dare you not to smile.

Anna Grimaldi’s final jump at the 2016 Rio Paralympics captured everything that can be so great about sport.

The teenager could not hold back her excitement when she realised just how far she had leaped in her final effort in the women’s long jump T47.

First she jumped for joy. Then she covered her face as the emotion began to surface. There is a quick glance back in the direction of her coach as if to check that that did just happen and that it is not a dream. And then the tears.

You could watch that video over and over. Just magic.

There was still a competitor left to jump, but she was unable to beat Grimaldi’s mark. The 19-year-old Dunedin athlete had pulled off a mammoth leap of 5.62m to take gold.

It was 21cm further than her previous best and would take her years to jump that far again.

It was also New Zealand’s first medal in a women’s Paralympic field event since Leslie Mancktelow claimed bronze in the long jump B3 in 1988.

"I knew I had to give it everything; the leaders weren’t ridiculously far ahead," Grimaldi told the Otago Daily Times at the time.

"The support’s been amazing.

"I just got back into a Wi-Fi zone and my phone has just blown up with messages and notifications from people back home.

"My family’s here. I didn’t

get to see them before I competed, so it was awesome walking out and seeing them in the crowd with the New Zealand flag."

Grimaldi shook off a stress fracture to defend her title in Tokyo and that was just as inspirational, if not more so.