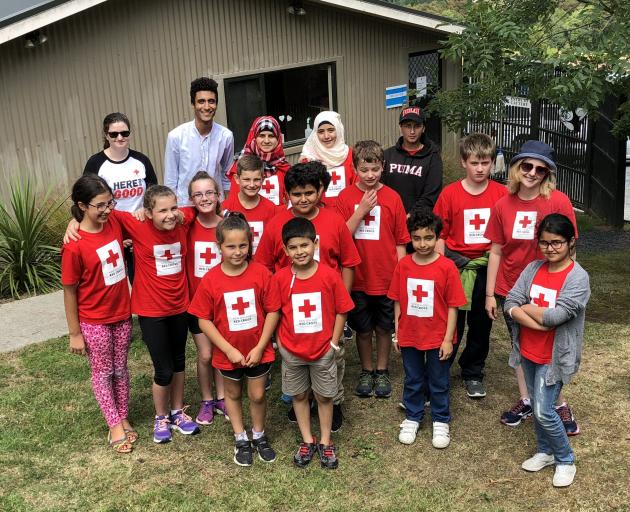 It is a quick journey to the Dunedin Red Cross office for Otago youth co-ordinator Sakhr Munassar (27).

He arrives at 8.30am after walking from his nearby apartment and promptly gets some admin out of the way.

"In the morning it's mostly emails. I teach first aid in schools and at the moment I'm trying to email to get bookings for (this) year."

A big part of his job was travelling all over Otago delivering first-aid courses to primary school children.

As we were speaking he was trying to secure a grant to support music programmes with former refugees in Brockville.

During school holidays he is kept busy co-ordinating the organisation's Young Humanitarians programme.

The last time it was held half of the participants were former refugees, which encouraged them to interact with the other pupils.

The children volunteer and perform "random acts of kindness", including baking and delivering the food to hospitals. 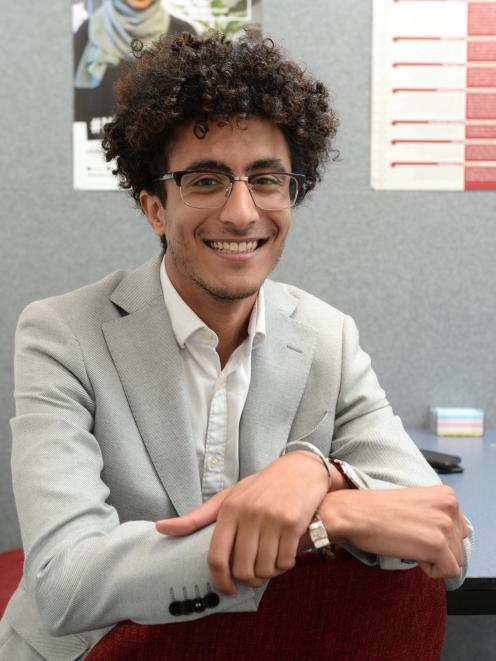 Red Cross Otago youth co-ordinator Sakhr Munassar sits at his workplace. PHOTO: LINDA ROBERTSON
While they also tried to have a "fun" sports day, the children enjoyed volunteering the most, he said.

"They usually say Meals on Wheels or visiting the hospital were their favourites, which was surprising to me."

At any point during the week Mr Munassar might have an appointment with a former refugee child.

"They will just come and talk to me about everything."

This could include behaviour issues, or problems at school which he can talk through with them.

"But sometimes they just want to get involved. One girl has been volunteering at Trade Aid for about three months; another girl at Life Matters Suicide Prevention Trust."

There had been an influx of refugees wanting to volunteer, resulting in the creation of the Young Former Refugee Youth Volunteer Group.

"Especially in summer that's when they get really active. They're more reliable than students because students go on holidays, are at home, or have exams.

"We can depend on refugees even during the summer. We didn't have that luxury a year ago."

Because a few of them had been in the country for two years or more, they now had the confidence to start seeking help to get paid jobs.

"So we're looking at Countdown, The Warehouse and stuff to see how we can get them ready for that."

One of the most important tools is his phone, which is constantly buzzing from message groups of former refugees he works with, who are helping each other and sharing achievements.

It reached the point where he had to ask his supervisor for a new phone.

"The current phone doesn't have enough memory to handle the pressure."

Wednesday was the only day which was fairly similar every week.

For an hour and a-half he would hold workshops at the Southern Health School, teaching non-violent communication, active listening and empathy.

On Wednesday afternoons he held a "homework club" for former refugee children at the Dunedin City Library.

"On a busy day we have about 25 former refugees and 25 volunteers. We pair them up and just help them for an hour and a-half."

There they can also speak to him if they have problems at school or otherwise.

Mr Munassar is from Yemen and went on exchanges to the United States while at high school.

He divided his time at university between the two countries and finished undergraduate study in 2015, but conflict in his home left him unable to return.

Two and a-half years ago he received a Rotary scholarship and moved to Dunedin to complete a masters in peace and conflict studies at the University of Otago.

While he was not a refugee, his background and fluency in Arabic were essential to the communication needed in his job.

It was incredibly rewarding, he said.

"You get to see results so quickly, it's amazing. Non-government organisations don't pay you gold, but the satisfaction you get from the job is more than enough."