The  best way to approach Rovinj, in the Croatian region of Istria, is by boat — the church looms into sight and the cobbled town falls away steeply below.

Cars are banned, the streets too narrow and stones too polished, so we catch a golf buggy from the port up through the ice-cream shops and then up again. From the top of the hill, where cats sprawl like shadows in the sunlight, we choose which islands to visit that afternoon, pointing down dizzily.

Ferries depart hourly, stacked with people better prepared than us with our bottle of water and lone film of sunblock. One day we choose Veliki Brijun with its Roman remains, modest safari park and newly hatched elephant. The next day we disembark at the Red Island, where a yellow bouncy castle floats in the sea and families mark out their territory with towels. Over the course of a hot afternoon, regular shrieks from the water alert us to another foot sliced on a sharp rock as it fights back against the tourists. We return to our B&B bleeding but delighted. And that is how the days go — a swim, an ice-cream, a forest, a fish. A jaunt to an island, some homemade pasta, a brief argument about the heat. Could this be the perfect holiday destination?

Istria is a heart-shaped peninsula in the northwest of Croatia, where the hills are dense with truffles and the coast appears to glitter. This is the millennial’s Tuscany — the food is influenced by nearby Venice (Italy controlled the area until 1947), the verdant olive groves inland produce award-winning oils, the sea is Instagram blue and surrounds cobbled fishing villages. But with significantly lower prices it attracts a far younger tourist than the Italian destination it’s so often compared to. And with cheap flights to Pula from the UK only recently introduced, a far less British one, too. 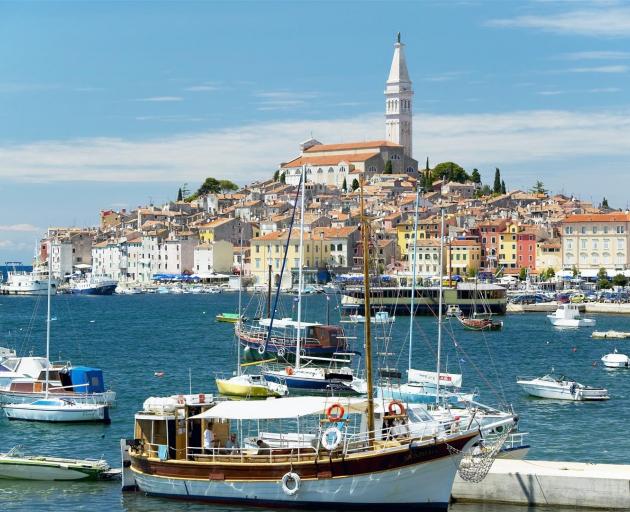 Glittering islands, bays and the ancient town of Rovinj combine to offer a perfect late summer holiday.
Part of Istria’s glorious charm is its ability to offer two, or even three separate holidays, often in the same day. Pula is a gritty port town clustered around a Roman amphitheatre built in the 1st century. Originally used for gladiator fights, the arena now stages less-bloody entertainment in the form of jazz concerts and film festivals. The underground chambers — once used to house wild animals and dead gladiators — now host objects more fitting to modern tourism: equipment used in the production of olive oil.

Ever since the Romans replaced Istria’s cypress trees with olive groves, the area has been famous for its food — oils, salami, cheeses and truffles. We get up early to drive to Buzet, where the son and daughter of Prodan Tartufi, a family business, introduce us to their gleeful dogs. We follow them into the forest, where a combination of oak and hazelnut trees and damp river soil makes it one of the richest grounds in the world for premium white truffles. But until the late 1990s, only locals knew — their truffles had been exported, masquerading as Italian. In recent years a steady flow of truffle hunting tourists has arrived, some to hunt, most to eat. It takes less than a minute before one of the dogs is scratching at the roots of an oak tree, giddily returning to its owner. We kneel by the tree and dig a little deeper, but we’re too late — the truffle he’s found is rotten. The pattern repeats itself as we trek on, swatting away mosquitoes, tempering our excitement with every dog bark. 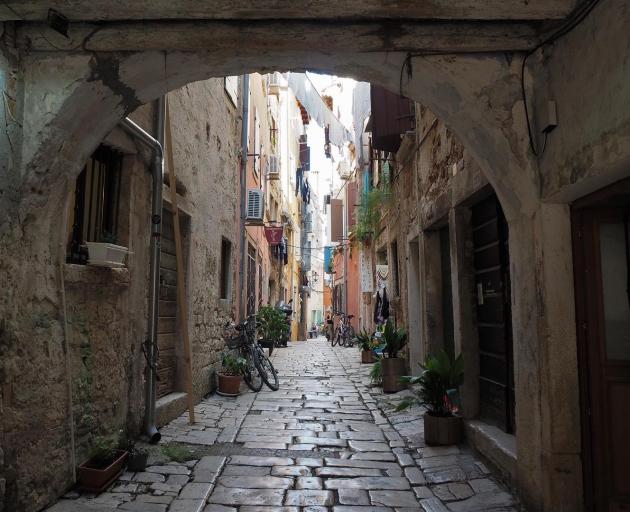 Street view in the old town of Rovinj, famous tourist destination on the shores of the Adriatic Sea, Istria Peninsula, Croatia. The street is paved with ancient limestone slabs.
In the cool of the patio we are rewarded anyway — a three-course lunch, weighed down with truffles they’d found earlier. Tasting of dark and mealy savouriness that’s more smell than flavour. The truffles here are treated casually, like parmesan or pepper. In restaurants a plate of truffle-laden pasta is one of the cheapest things on the menu. And it’s never just a taste — the waiter starts shaving it on, and continues and continues until the pasta has disappeared altogether.

Back in Rovinj, where the stone town glows pinkly as the sun sets, we pop to another beach to cool down. That night we eat fresh fish on the edge of a cliff, watching old men dive into the water below.

We split the trip in other ways — the first half of the week is spent in town, in a modern B&B called the Melegran. From the outside, it looks like every other ancient family house, its door opening on to the narrow cobbled street; but inside are gentle pastels and mid-century touches. The hole-in-the-wall reception doubles as a bar, and locals collapse here for a drink out of the heat. They offer bicycles and beach towels and local knowledge that helps us avoid greasy pizza cafes at the port. The owners’ recommendations take us up through the twisting back streets to another exquisite little restaurant, with another exquisite little menu, and a lurching walk home, wobbly on malvazija.

The second half of the week is spent around the bay, in a stretch of land developed by the Maistra group, where their luxury hotels provide much of the industry for the region. From the pool of the newly opened Grand Park Hotel, the town of Rovinj appears across the sea framed in twinkling lights. Yachts moor down by the restaurant. In the moonlight we split our trip again, this time from the sofa. Through one of the hotel’s vast theatrical windows we watch the yacht owners’ dawn champagne parties; through the other, we see the fishing boats come in. — Guardian News and Media