Albania's past never far away 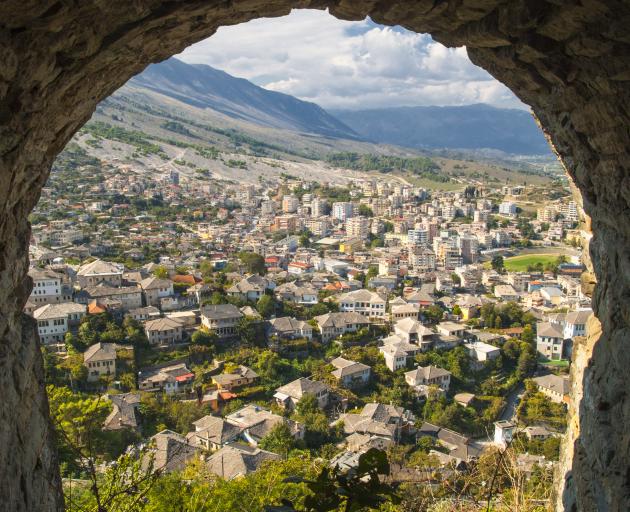 Old Town Gjirokaster from the castle. PHOTOS: GETTY IMAGES
Strange, ancient and beautiful, there’s much to discover amid the cultural crossroads of Albania, writes Fiona Dunlop.

Was it a wolf? As our car swung round yet another tight bend deep in the Albanian countryside, a gangly, shaggy creature watched from the edge. No doubt it was, as we had just left a nature reserve where a panel on local fauna portrayed an identical Canis lupus. Nor was it to be the only unexpected experience in the land of Zog (Albania's only king, in the 1920s and '30s) which, under the repressive dictator Enver Hoxha, was hermetically sealed apart from the rest of Europe until the 1990s.

We had decided to start our journey in Corfu, to avoid the chaos and expense of the capital, Tirana. From across the strait, the mountainous silhouette of Albania came and went tantalisingly in a halo of cloud, so when the hydrofoil finally chugged into the port of Saranda, it was a shock to find a jungle of haphazard high-rises hugging the shore. This kick-off to the "Albanian Riviera'' was not for us, however, as my partner and I had plotted our road trip deep into the rugged interior of the south, in search of Byzantine jewels, quaint Ottoman-era guesthouses, mosques, castles and restaurants dishing up delectable local produce.

"Albania only has one road - it goes all the way to Kosovo. You can't get lost!'' beamed our car-rental man at the port. Not exactly the case; in fact, a map is essential. In this curious time-capsule where private cars have only been around for 25 years, double-parking, erratic driving and unclear road signs became part of the rich experience. Sturdy Mercedes and shiny SUVs were the norm, but when we swerved past an old man on a bike or a donkey, it was all about changing centuries.

The historical town of Berat in Albania.
Idiosyncrasies piled up, not least the Albanian habit of shaking one's head to mean yes, and nodding for no. The language itself is unlike any other, though sprinkled with Italian imports. Some things worked in reverse: a copious breakfast started with cake and segued into feta, tomato and sculpted sausage before ending with eggs and, at last, coffee - with fruit on the side.

Our first destination was the Unesco world heritage site of Butrint, just south of Saranda. Scattered over a wild, forested peninsula and accessed via a tangle of unsigned trails is an incredible assortment of ancient Greek, Roman, Byzantine and Venetian buildings, as well as a superb little museum. A few hours slipped by magically, enhanced by glimpses of sea, swallows and fragrant wildflowers. Not far away, we stopped for lunch at Mussel House restaurant. At a table beside a vast, moody lagoon rimmed by mountains, we ate local mussels, seafood linguine, grilled sea bass and sipped glasses of local wine - all for 22 ($NZ42).

Replete, we motored on to the region's beauty spot, Blue Eye, in a green valley. Here, a spring bubbling from karst rock infused a pool with every possible hue of emerald and turquoise in a hypnotic circular flow. It was like a mirage, or perhaps an Albanian fairy tale, because soon afterwards we spotted that wolf, tongue out. Not only him, but also wild horses, flocks of sheep and herds of goats.

Gjirokastra, our next stop, is renowned for its castle and harmonious Ottoman quarter. Beauties included the rambling Skendulaj house where we were shown around by an 11th-generation family member. Confiscated under Hoxha's communist rule, it was restored to its owners in 1993. Equally striking, though chilling, was the air-raid shelter, a maze of underground tunnels and offices and a staggering reflection of the paranoia of Hoxha's regime. Yet again, though, we couldn't fault the food or the kindness of the locals. 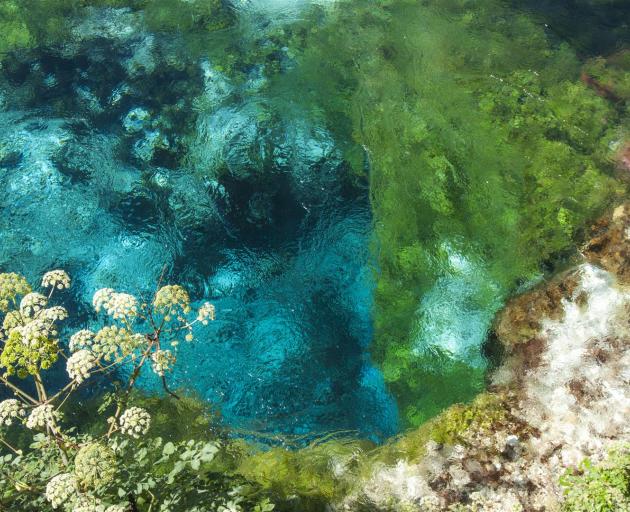 The beautiful turquoise waters of the Syri i Kalter (Blue Eye) spring in Saranda.
Sheer drops, steep rocky mountains and patches of light industry accompanied us ever northwards, straight up the main highway that slices the country alongside the broad, silvery River Vjosa. More ancient ruins awaited us up a rough track which, agonisingly slowly, brought us to Byllis, a 2500-year-old Illyrian city, haunting and deserted, before we reached Berat - for me the star of the show.

Lively and embracing, this stunning "city of a thousand windows'' (another world heritage site) straddling the River Osumi is formed by two opposing hillsides of tightly terraced Ottoman houses with a citadel crowning the highest district, Mangalem. Up inside the walls, medieval churches, two crumbling mosques, private houses and an exceptional museum of Byzantine art easily filled a morning's visit, while low-key hotels and restaurants provided pit stops.

Food came into its own in Berat. One evening, seated at a restaurant window with a twinkly view down to the river, I sampled a crunchy treat of batter-fried frogs, fresh from those waters below. Another night we drove up to the citadel to chat with Bashkin, the owner of the charming Antipatrea restaurant. Dinner included byrek me spinaq (flakey spinach pie) and tave kosi, "sour'' lamb baked in yoghurt (totalling 18, $34.50). As we drank smooth red wine from his vineyard, Bashkin told us about his 17 years working in Florence, and that one third of Albania's population lives abroad. Italian is widely spoken, though English comes close behind, so communication was rarely a problem.

Berat was where we understood, too, how Christianity, Islam, Bektashi (a strand of Sufism) and Judaism have co-existed harmoniously for centuries in Albania - apart from an atheist hiccup under Hoxha when religion was banned. This tolerance was illustrated by a 15th-century sultan's mosque, still in use, a teqe (Sufi shrine), a tiny Jewish museum and finally a grandiose Orthodox cathedral, all within spitting distance of each other.

From there, backed by distant snow-capped mountains, we meandered into a long cafe-lined boulevard. Sunset approached and hundreds of men and women were strolling back and forth, stopping for a chat or coffee. This was the xhiro, like the Italian passeggiata or Spanish paseo - a sign that despite its exotic past, Albania is very much a Mediterranean country. So it turned out that Albania is an enlightening cultural crossroads where Greece, Italy and the Balkans meet. On the cusp of change, still cheap and, so far, with only a trickle of tourists, it's definitely a good time to visit.

British Airways flies from Heathrow to Corfu from £59 ($113) one way. The 35-minute hydrofoil crossing to Saranda is £18 ($34.50) one-way with ionianseaways.com. Mid-summer temperatures in the country top 40degC.