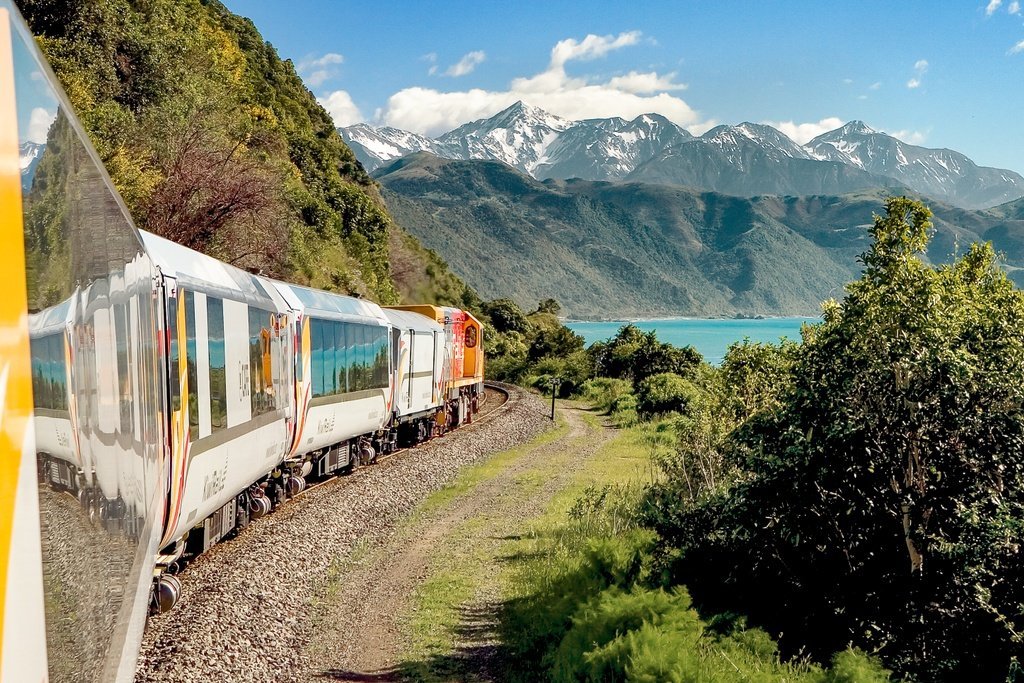 The Coastal Pacific threads its way along the Kaikoura coast. PHOTO: GREAT JOURNEYS OF NEW ZEALAND
Overseas travel is not what it was - and won’t be for a while - so it is time to get out and see our own country. And what better way than relaxing on a train? Hayden Meikle jumps aboard the Coastal Pacific.

"Trains are wonderful. To travel by train is to see nature and human beings, towns and churches and rivers, in fact, to see life."

Agatha Christie said that, and it’s one of the loveliest expressions about train travel you will find, summing up as it does the appeal of partaking in this form of transport. 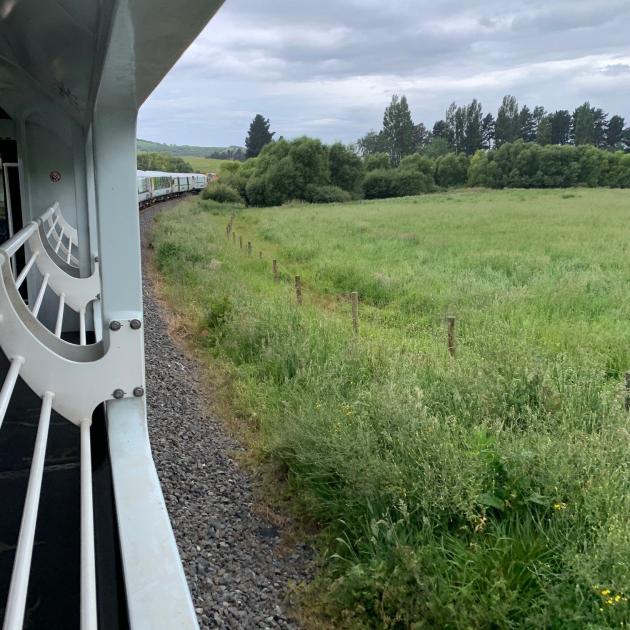 The best place for a view is the open-air carriage. PHOTO: SASKIA MEIKLE
There is a romance, a rhythm, to travelling on a train. The hours whizz by but you never feel like you are rushing; people you meet on a train always seem friendlier than people you meet on a bus; there is a relaxing spirit to train travel that aeroplanes have never quite been able to replicate.

Sadly, train travel is no longer commonplace for many of us. Long kilometres of New Zealand track lie quiet for much of the time, and the only regular passenger services are in the two big cities.

Happily, Great Journeys of New Zealand offers the big three - the Northern Explorer (Wellington-Auckland), the TranzAlpine (Christchurch-Greymouth) and the Coastal Pacific (Christchurch-Picton) - as world-class train trip options to see some of our country from the comforts of the carriage.

My great journey is to be on the Coastal Pacific, leaving Christchurch bright and early and bound for Picton, which only resumed in October after being mothballed when Covid-19 hit.

The experience is part of the Scenic Plus service, launched by KiwiRail with the backing of $40million from the Provincial Growth Fund as a "premium tourism" option - train travel with all the trappings, if you like.

The "Plus" boils down to hospitality and food - as the seats appear to be identical to the plain old Scenic carriage, and the views do not change - and it is not long after settling into our carriage on a mild Christchurch morning that we get a taste of both.

We meet Gary. (I didn’t get his last name but this works out fine as it endows him with the sort of dignified status accorded some of the greats.)

Part waiter, part barman, part raconteur, part storyteller, Gary is blessed with the opportunity to almost literally serve my wife and I around the clock as, slightly worryingly but perhaps understandably given the pandemic’s effect on tourism, there are just three people (the two of us plus a young railway tragic from Auckland) in the entire Scenic Plus carriage. 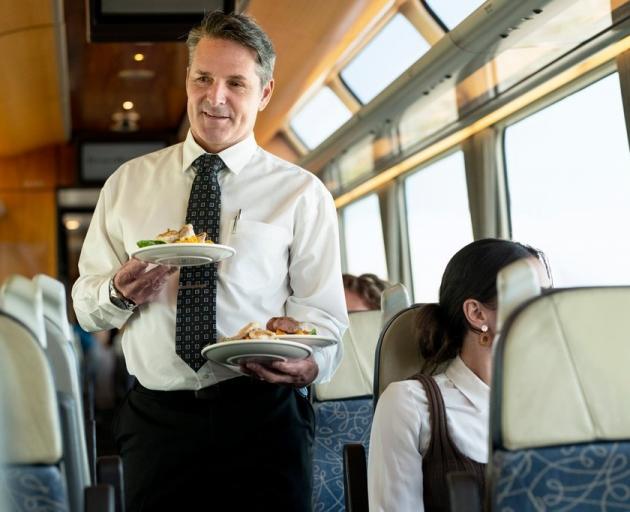 Hospitality in the Scenic Plus carriage is a feature. PHOTO: GREAT JOURNEYS OF NEW ZEALAND
Gary will be our near-constant companion for the journey to Picton.

Gary’s gift is an ability to ensure his presence never becomes an irritant. He points out places of interest, joins us in watching out for dolphins as we near Kaikoura, tells yarns of previous trips, offers suggestions for things to do and places to eat.

Gary also promises sunshine, highlighting the places on the journey that look most beautiful in glorious weather, yet he proves unable to do anything about the grey skies that accompany us for the entire trip. That’s your one black mark, Gary.

But I am getting ahead of myself.

Shortly after leaving Christchurch, heading slightly inland and winding through some lovely countryside, we are served what I will, not at all hyperbolically, describe as the best breakfast I’ve ever eaten.

Labelled the "New Zealand breakfast glass", it’s an exquisite concoction of chia and coconut pudding, topped with Geraldine-grown rhubarb and red berry compote, blueberry crunch and toasted hazelnuts. An unexpectedly heavenly delight to start the day, topped off with a little pastry.

Later comes a sweet scone with jam, and a selection of cheeses. Gary proudly refers to the food being sourced locally, and I - a son of North Otago - proudly point out the cheese comes from our own Whitestone.

The wine (yes, even in the morning) and soft drinks start to flow as the journey continues.

After cruising through the top end of the Canterbury plain, we traverse the Hurunui area, looking particularly lush at this time of year.

There is not a great deal to see but that’s not really the point.

Sitting back and doing nothing and watching farmland and forest go by is the quintessential train experience.

For those keen to find out more about some of the landscape and the little towns that once featured on the regular passenger service around Canterbury, there is an audio commentary available with regular snippets of trivia.

And when the pre-recorded bits of commentary are done, Gary - who else? - is on hand to yarn away about almost anything. 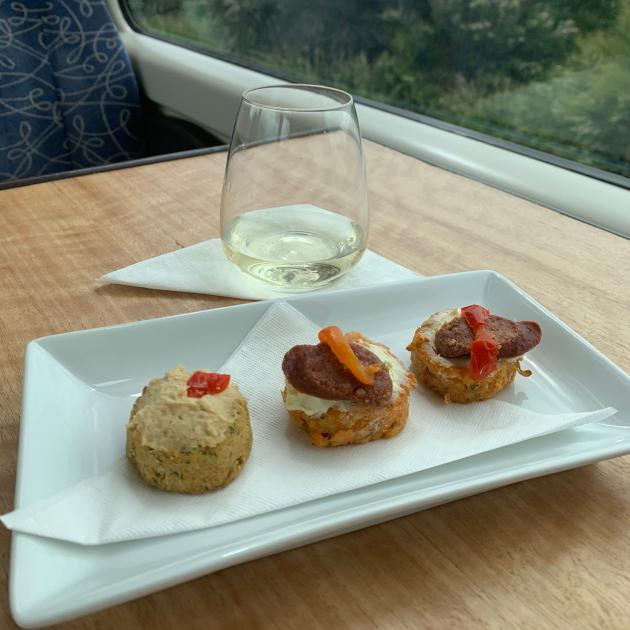 ‘‘Farewell canapes’’ as the train nears Picton. PHOTO: SASKIA MEIKLE
Like almost all the hospitality staff on board, Gary is ex-aviation, a long-serving flight attendant who found himself grounded when Covid-19 laid waste to international air travel.

He sounds slightly wistful when he recounts tales of his career in the air and spells in places as varied as Italy and the southern United States, but - ever the professional - he very quickly returns to enthusiastic-about-train-travel mode and sells us hard on the delights of the Coastal Pacific.

Before we can blink, the train has indeed come back to the coast, and we turn from near-dozing train travellers to excited wildlife spotters as Gary (is there anything the man can’t do?) starts excitedly pointing out dolphins leaping gracefully out of the ocean.

What is it about dolphins? Hard to say, but we spend the next 10 minutes of our journey on the lookout for the creatures.

When that finally loses its appeal, we belatedly check out the open-air carriage at the back of the train. It is cool but not cold, and the combination of fresh breeze in our faces and the sound of the train on the tracks and the scenery is quite intoxicating.

the 20-odd tunnels on the journey to Picton.

As we near Kaikoura, we start to see the signs of damage wrought by the 2016 earthquake in the town. (The railway tracks suffered serious damage from the quake, and the passenger train from Christchurch to Picton did not resume until two years later.)

Gary, again, comes into his own as he points out rips in the land, and roads that were rebuilt, and bulging bits of land that the quake reclaimed from the sea. It is fascinating and sobering at the same time.

Intriguing, too, are the Lake Grassmere salt flats further up the line, about 40km south of Blenheim. They are really quite extraordinary - and I suspect many people have no idea they exist.

Saltwater goes into the ponds around the lake, and the warm nor’westers that blow across them evaporate the water, increasing the concentration of salt. In summer, algae mixes with brine to create a pink hue that looks almost other-wordly.

Speaking of other-wordly, we are hungry again, and we are treated to "farewell canapes" as we begin the final stretch to Picton.

Some of us hear "canape" and roll our eyes as we prepare for something that is too small - and, often, too full of niche ingredients - to get excited about. But Coastal Pacific canapes - one in particular: chorizo and a sliver of capsicum on a kumara rosti - are just divine.

The train rolls into Picton shortly after lunchtime, and we disembark for an afternoon and evening in the harbour town before our return trip to Christchurch the following day.

Picton seems very quiet - a ferry has just left - and the sight of several empty businesses is concerning, if understandable given the borders being closed and the town’s reliance on the tourist dollar.

An unexpected delight is the aquarium - which, brilliantly, is in the same complex as the cinema - and a chance to see some fascinating aquatic species as well as tuatara.

While some businesses have closed, the wonderful Oxley’s restaurant and bar is packed to the gunwales at night as we indulge in some delicious fresh fish and rich desserts.

The next day, after brunch and another unexpected find, the charming Picton Library, it is back to the railway station to catch the Coastal Pacific for the return journey.

Expecting a different host/storyteller/all-round top person, we are pleasantly surprised to be greeted by ... Gary again, filing in for a crook colleague.

This time, however, the Scenic Plus carriage has at least 20 people in it, so Gary is forced to divert his attention to some other passengers.

The sun does, as promised, come out, and the journey back to Christchurch features an afternoon doze as the scenery, while pleasant, has not changed all that much in a day.

More food, of course - a highlight being a lovely take on steak and chips: lamb, seared just right, on a bed of gourmet potato salad.

Then, as Christchurch approaches, a range of delicious Wigram macarons in all the colours of the rainbow.

We farewell Gary, we collect our luggage, and we already start to think about our next train trip. It is the best way to travel.

• Hayden Meikle travelled on the Coastal Express courtesy of The Great Journeys of New Zealand.