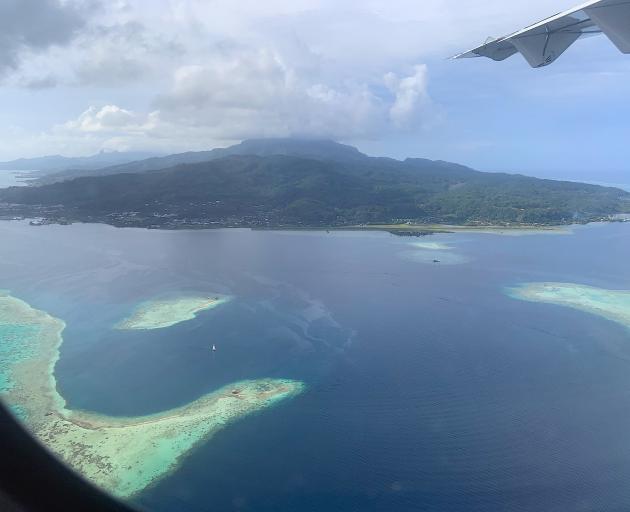 Ra'iatea from the air, looking over the lagoon towards its main settlement, Uturoa, and the northern end of the island. Photos: Neville Peat
Tahiti was James Cook’s Polynesian gateway to Aotearoa New Zealand 250 years ago. Dunedin writer Neville Peat went to the Society Islands in this sestercentennial  Cook year to visit Tahiti and Ra’iatea, formerly known as Havai’i. 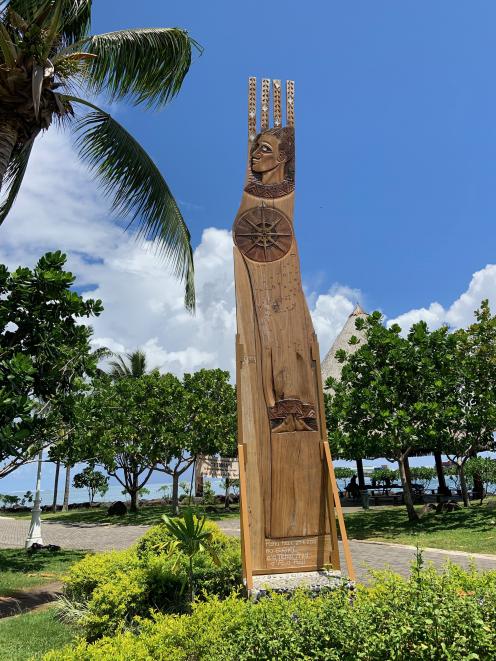 A memorial totem for Tupaia, who set sail for Aotearoa on Cook's Endeavour.
Three kilometres up the bush-clad Fa'aroa River on the island of Ra'iatea, adrift in a large outrigger canoe, guide Tihoti uses the sylvan stillness to pay tribute to the forest, its god Tane and its life force.

He alternates traditional ritual chants, called pepe, with the haunting strains of his bamboo nose flute, mimicking a songbird.

It is a wholesome if not holy moment.

The riverbank is close and dense with shrubs bearing large heart-shaped leaves of hau, a hibiscus species reminiscent of the New Zealand native corkwood with a similar name, whau.

Tihoti stands to deliver his respects and tribute to the forest. He wears a red lavalava. Yet he is more dressed up than that. From head to foot, he is covered in a continuous montage of tattoos featuring human and creature effigies and what look like stonework patterns, with more effigies and an ocean-going sailing vessel on his back. Half his face is tattoo-free, reflecting two contrasting worlds, temporal and spiritual.

For a canoe or va'a 14m long and fitted with an outrigger and awning, there is only just enough width in the river this far upstream to turn around. Instead of paddles there are two Yamaha 150 outboard motors. The driver, Samsoni, restarts them for the journey downstream, the river widening again as we return to the lagoon. Also on board is Tihoti's uncle, Heimau, a colourful priestly figure with a pendant made of shell and coconut husk fibre.

Tihoti Matauteute pays tribute to the great marae of Taputapuatea.
We boarded the va'a, my wife and I, at Ra'iatea's main town of Uturoa, surprised to find we were outnumbered by guides and crew. Tihoti Matauteute and his uncle, clasping large conch shells, welcomed us aboard the red-hulled boat decorated with pandanus leaves and tropical flowers.

Soon the conch shells hit their straps. With serial horn blasts, our guides announced to anyone listening onshore the va'a was outward bound on the lagoon.

Ra'iatea, green, mountainous and about 100km around by the coast road, is somewhat off French Polynesia's high-end resort circuit. But what it might lack in flash accommodation and swimming pool cocktails, it makes up for in Polynesian history and mythology.

For this South Seas volcanic island, population 12,000, lying 200km north of Tahiti, is regarded as the launch pad of ancient migration in East Polynesia - the era that discovered and settled Polynesia's outreach lands of Hawaii, Rapanui (Easter Island) and Aotearoa New Zealand, far and away the largest area of the planet inhabited by a single people.

Indeed, Ra'iatea was formerly known as Havai'i. It is surrounded by a barrier reef and a lagoon on which we are heading south - first stop Fa'aroa, a bay and river, from where traditions say Kupe departed on an exploring voyage that found Aotearoa New Zealand a thousand years ago.

Our main destination, though, further on, is the hallowed Taputapuatea Marae at 'Opoa on the southeast coast, one of the island's remotest and least populated areas. 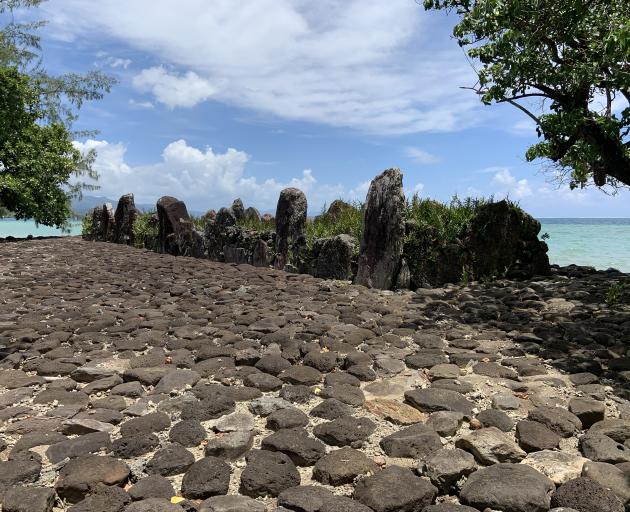 Hauvir'i marae at Taputapuatea borders the lagoon shoreline.
From the va'a, we see the blackened standing stones of the great marae complex before we reach the nearby lonely jetty.

Did James Cook have this same view? Piloted by Tupaia, a star navigator who was trained here in the specialised arts and accomplishments of the Arioi priesthood, Cook's Endeavour sailed majestically through a passage in the barrier reef on July 20 1769, following observation of the transit of Venus across the face of the sun in Tahiti the previous month. Endeavour anchored off Taputapuatea, enthralling the local people. 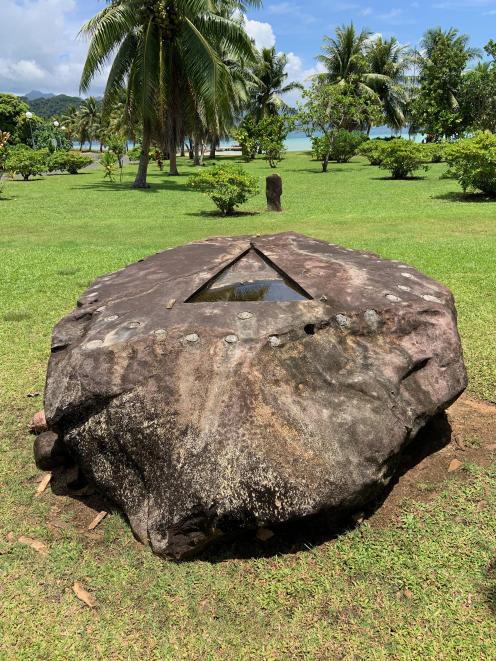 The ceremonial stone of Taputapuatea, a modern-day shrine.
Actually, years before this, a Ra'iatean high priest had predicted the island would be visited by a strange oceangoing vessel with no outrigger.

Besides the ceremonial welcome the strangers received, there was a flag-raising, formally conducted with marines in scarlet uniforms. Cook read a proclamation, taking possession of Ra'iatea and three nearby islands, Taha'a, Huahine and Bora Bora, in the name of King George III, the English monarch.

At the time, Ra'iatea was threatened by an attack from Bora Bora warriors and, following advice from Tupaia, Cook wanted to to get the formalities over and done with.

Cook was highly impressed by Tupaia's knowledge of the islands in this part of the Pacific, their names, size and shape, lagoon access points, inhabitants and productivity. Tupaia described about 130 islands for Cook, some 40 of which correlated with islands of his own charting.

In her 2009 book, Aphrodite's Island - The European Discovery of Tahiti, eminent Auckland anthropologist/historian Dame Anne Salmond sets the scene for the interaction between these two extraordinary navigators:

"It is easy to imagine the conversations between Tupaia, Cook and the Royal Society scientists and artists as they sat in the Endeavour's Great Cabin, surrounded by a clutter of charts, books, sketches, specimens of animals in bottles and plants pressed in paper, with bundles of seaweed dangling from the ceiling." 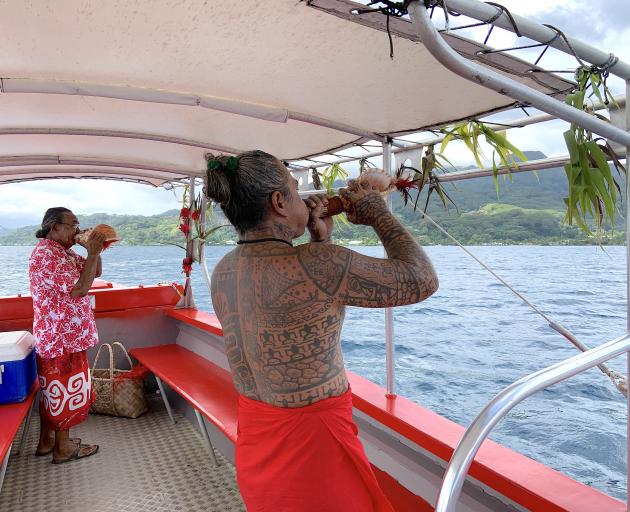 A conch shell trumpet duet from Tihoti and his uncle, Heimau.
Arriving in a speedboat powered by two thunderous outboard motors would have been beyond the imagining of 18th-century explorers but once the motors are silenced and we step ashore, the area's cultural significance, hundreds of years in the making, slowly unfolds.

The great marae of Taputapuatea, a platform of coral rock 50m long, is still here, fringed with small Cordyline cabbage tree relatives called auti. On the far side of the rock platform is a row of giant standing stones, some more than 3m high.

Tihoti says he wants to address atua (deities) such as 'Oro, the god of fertility and life, and Ta'aroa, god of the sea, which gently washes the nearby beach, and he does this by alternating chants with flute playing.

"Feel the life force," Tihoti says. "Feel the ancestors and the elements."

The 3ha complex includes a second, smaller rock platform bordering the lagoon, a marae named Hauviri, in the middle of which stands a ceremonial coral slab 4m tall.

An islet on Ra'iatea's barrier reef.
The whole site was designated a Unesco World Cultural Heritage Area in 2017. Since Cook's visit 250 years ago, surrounding forest gradually invaded and uprooted the marae's stonework. There were periods of disrepair. But thanks to a restoration project led by Japanese archaeologist Prof Yoshihiki Sinoto in the 1960s, the site is now coveted and well maintained.

Over many years, Polynesian mariners and dignatories, including Maori, have come here out of respect for the site, bringing rocks and other homeland artefacts as offerings. The focal point for them is a ceremonial volcanic boulder with a triangle etched on its surface representing the Polynesian triangle that straddles the North and South Pacific Oceans.

Here, for our benefit, Uncle Heimau adds his own thoughts about the importance and sacredness of the site (just as well, as the visitor centre offered only brochures in French).

Having taken possession of the islands for Britain, Cook and his expeditioners, now including Tupaia, departed in search of the fabled lost continent of the southern seas. 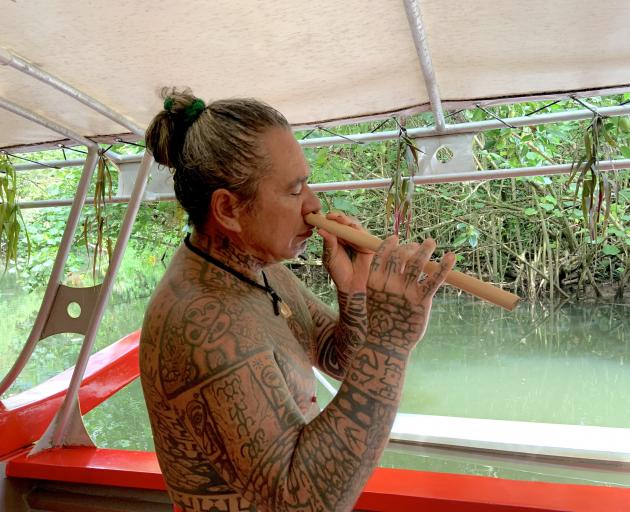 Tihoti Matauteute plays a nose flute on the Fa'aroa River, Ra'iatea.
Finding no land due south, Endeavour altered course westward to tie in with Abel Tasman's 1642 co-ordinates for an inhabited landmass that would later be named after the Dutch maritime province of Zeeland. Endeavour came upon it on October 6, 1769, when the surgeon's boy, Nicholas Young, sighted the Turanganui (Gisborne) coast.

On the return journey to Uturoa, I ask Tihoti about the colonisation of French Polynesia (118 islands, 67 inhabited), that began in 1842 and has evolved into a form of self-rule today, although these islands remain a French overseas territory or "collectivity".

Tihoti says most of the land, despite colonisation, is still held in family titles and independence is not something the new generation of Tahitians and Ra'iateans think much about.

"They're too into digital technology that links them with the wider world - they've got a global perspective. That's far more interesting than sovereignty or independence issues."

A professional tattooist, Tihoti is steeped in the traditional world of Ra'iatea, the old Havai'i. His tattooed body is a graphic statement of his cultural links, and his chants and traditional songs represent a passion to keep the Hawaiki/Havaiki ancestral homeland fires burning.