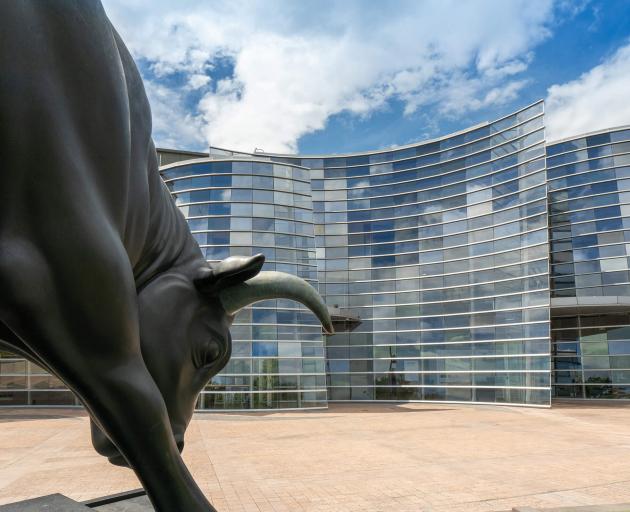 Street art, such as Chapman’s Homer, has given Christchurch’s city centre a distinct persona. PHOTO: MIKE YARDLEY
Christchurch’s reawakened tourist draws offer a fresh safari of sights and experiences, as Mike Yardley discovered on a post-lockdown urban exploration of his hometown.
Christchurch's Riverside Market is the gift that keeps on giving.

Since opening last spring, this roaring success of mercantile temptation has fast stamped its mark as the central city’s new anchor. You’ll find yourself returning there time and time again while free-roaming Christchurch on your urban safari. It is a cradle of culinary temptation, an emporium of goodness and decadence in equal measure.

One of my favourite merchants in the food hall is The Butcher’s Mistress, where the meat is so radiantly red, you know it’s fresh off the hoof. They are sticklers for locally sourced meats, whether it’s Canterbury lamb, Angus beef, free-farmed pork or South Island venison. Always inventive, a big seller while I was there was their legs of lamb marinated in Coca-Cola. It’s a cut above the rest. Other essential nosh-stops include Charing Cross Cheesery for their artisan sheep milk delights and the Bohemian Bakery and Cured, for their hand-crafted gourmet salami. But be prepared to leave room for The Donut Dispensary — Krispy Creme doesn’t have a patch on these tricked-up treats. Their Boston Creams are a supreme scoffing experience.

The Terraces on the Avon River in central Christchurch. PHOTO: MIKE YARDLEY

There’s also a feast of ethnic food booths to expand the taste buds, like Dosa Kitchen. A dosa is a south Indian savoury pancake created from a fermented batter of soaked rice and lentils. They’re vegan and gluten-free, but no matter how your palate rolls, you’ll fall in love with its seductively sour, tangy flavour and airy, crisp texture. Don’t miss the Kombucha Girls, a stellar little business, fawned over for its vegetarian treats and flavour-hit Kombucha drinks. Snap up some bottles to go.

While the food hall is the star, brimming with artisan producers and purveyors, there’s also a supporting cast of wraparound restaurants and surprise finds in the fabulous laneway stores such as Shopology. The homewares store is staunchly patriotic, an exemplar of the buy local ethos, where their creative collection of homegrown products spans jewellery, fashion, artisan food products, art and gifts. Another gem is Beehive Collective, a wellbeing store where the displayed wares of local creators promote personal wellbeing for the heart and home, and even your pets. Kiwi Originals is a go-to for specialist New Zealand-made gifts and homewares. I adore their native bird cushions.

A surefire way to get up to speed with the tale of the tape from the past 10 years of post-quake redevelopment is to take a city cycle tour with Stu Waddel from Chill. Stu shifted to Christchurch from Wellington, lured by the soft-adventure bounty of Canterbury’s great outdoors. He didn’t expect to fall in love with the city itself, but the post-quake evolution has enraptured him. Despite its obstacle-course consequences for motorists, the reconfigured city centre’s dedicated cycle lane network makes sightseeing by bike a breeze — so you might as well use them! Stu’s two-hour tour, casting a giant figure of eight configuration across the city centre, threads together a highlights reel of old and new Christchurch. And his story-telling is masterly.

Christchurch is littered with street art. PHOTO: MIKE YARDLEY
However, it’s the street art, the public art that has really given the city centre’s fabric a distinct persona, from the spell-binding profusion of wall murals to the striking installations like Michael Parekowhai's powerful bronze sculpture of a bull standing on a piano. Called Chapman’s Homer, it captured Christchurch's heart shortly after the quakes and takes pride of place outside the Christchurch Art Gallery. Despite living in Christchurch, I hadn’t previously appreciated some of the hidden gems that Stu incorporated into his touring route. Edging north Hagley Park in Park Tce, Solidarity Grid is a public art installation of 21 street lamps from 21 cities, gifted to the city as a gesture of solidarity during the recovery. All highly distinctive, from Swiss sleek design to ostentatious Chinese designs, donor cities include Adelaide, Seattle, St Moritz, Gansu, Wuhan, Sendai, Boston, Sydney, Sofia and Mexico City.

Tootling through Christchurch Botanic Garden, Stu led me to the urban treasure adjoining the Daffodil Woodland. Flora and Otto is a throne-like stone armchair and ottoman, lovingly covered with broken china, crowd-sourced from households after the quake. It weighs two tonnes. There’s hidden finds aplenty — like the large rock ‘‘mani stone’’ placed at the foot of a Himalayan Pine tree that was planted by the 14th Dalai Lama of Tibet. Within the city centre, we also savoured some of the new pocket precincts that have sprung up in recent years, such as Salt District, a hive of mixed-use buildings with boutiques and boho eateries on the ground floor, while offices and apartments rise above, all bedecked in eye-catching mural art. The lip-smacking Little High eatery emporium is in the same neighbourhood. A top foodie option is to pull up a seat at the bar of Eightgrains and admire the chefs at work while you savour a teapot cocktail and nosh on some seriously delicious dumplings.

I also took a cultural and culinary meander along City Promenade, flanking the Avon River, with Cate and Riwai Grace from Amiki Tours, dipping into the city’s multicultural narrative and some of the creative Maori businesses in the city centre. And the night time kai safari is a progressive dinner, threading together a string of eateries with seasonal shared plates of local produce from fabulous venues such as Inati. It’s also a great way to decipher the plethora of Maori design elements that now enrich the city centre.

The glittering giant of Te Pae, the city’s glittering new convention centre, is nearing completion. Its sheer heft is being artfully softened by the 40,000 herringbone tiles, fashioned in braided river patterns, taking shape on its curvaceous facade. In spring, waka tours will be launched on the Avon River, while many of the city’s old-standards, such as Punting on the Avon, the tram and gondola are about to come back to life.

I headed for our heritage-wreathed hills, joining Nicole Ellwood from Crater Rim Walks, for a personal guided hike on the Godley Head Loop Track, complete with drinks and eats. Nicole runs a variety of bespoke tours on the walkway network, atop the caldera of this ancient shield volcano. Rest assured, it last erupted 5million years ago. From the exalted coastal promontory of Godley Head, at the eastern end of the walkway, the vista over Lyttelton Harbour’s bright cerulean water, backed by the light-tanned Banks Peninsula landscape of tussock and basalt rock, scalloped by bays and pronged by rugged peaks, all make for a painterly landscape. To the west, the panorama takes in the golden sands of Taylor’s Mistake, lofty Scarborough and the city’s sprawling patchwork. But Nicole really brought the headland to life with so many anecdotes and insights as we strolled the trail. I could virtually see those mighty sailing ships carrying wide-eyed early settlers and precious British cargo past the headland to dock at Lyttelton, after three torrid months at sea.

Gazing down on the harbour’s entrance, where Hector’s dolphins frequently frolic, German-laid mines still lurk in the vast depths of the seabed. Despite numerous attempts to identify their specific location, the mines continue to elude Navy divers. Dovetailing with the 75th anniversary of the end of WW2, the gun emplacements of the coastal defence battery at Godley Head have been refreshed with some superb wall murals by Wongi Wilson, in tribute to the home guard, particularly to the women who operated the compound. The sirens to the past continue with a stirring relic from Captain Scott’s ill-fated polar expedition at Godley Head. One of the pre-fabricated huts that travelled to and from Antarctica on the Terra Nova, is now permanently located on the headland. Climb the stairs on to the roof balcony for even more elevated views. After the Terra Nova returned to Lyttelton, Scott’s grieving wife Kathleen actually stayed in the hut after it was first assembled in Sumner, as did Scott’s dog handler. Kathleen learned of her husband’s death on her voyage here. Soon after arriving, she was commissioned to sculpt his magnificent memorial statue, which you can admire on the City Promenade by Worcester Boulevard.

Christchurch Adventure Park boasts a plethora of high-octane mountain bike and walking trails, New Zealand’s longest chairlift and a four-zipline adventure tour. PHOTO: CHRISTCHURCH ADVENTURE PARK
My runaway soft-adventure highlight was also on the Port Hills, at the Christchurch Adventure Park. Alongside the plethora of high-octane mountain bike and walking trails, and New Zealand’s longest chairlift, the park also boasts a four-zipline adventure tour, including the nation’s highest and longest lines. I opted to do the stand-alone Long Ride, which spans 1.1km. Hurtling down to the floor of Cashmere Valley and flying over the pine forest canopy with a bird’s view across the city, it’s a high-velocity, catch-your-breath ride to remember. The rush of air is exhilarating as you charge down the line at speeds up to 100kmh!