Magnificent views can be seen from Sole to Soul’s guided walk on the top of Collie Hills farm. PHOTOS: JAMES MITCHELL
Into the hills I go, to lose my mind and find my soul... Lisa Scott spends a day in the ‘‘Haka’’.

I've seen some stuff. The pyramids of Giza, the Mona Lisa. But nothing comes close to the sights that gladdened my eyeballs in the Hakataramea last Sunday. 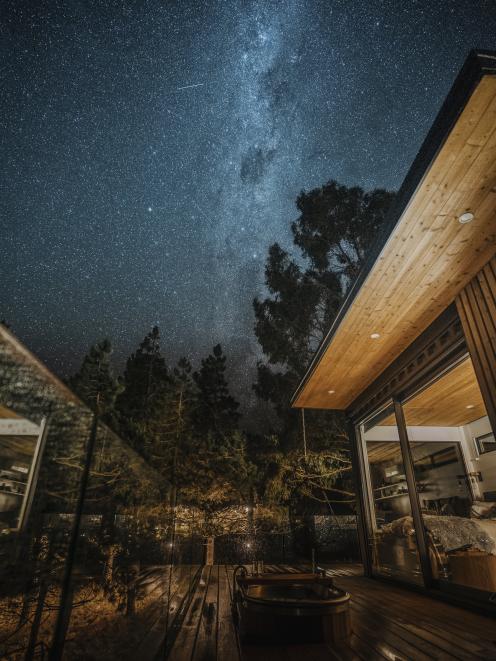 The treehouse accommodation at Nest is luxurious under the stars.
Haka tara mea: the name means "a dance beside the river". This little-known valley lies on the north side of the Waitaki River. The Hakataramea River winds through it, an arterial sister to the dammed.

First up, a guided walk with wellness company Sole to Soul’s Juliet and Sally. Their clients enjoy the benefits of ecotherapy (letting Nature "sshhh" the everyday stresses that leave you feeling squashed) while sharing a walk the girls love to do themselves on Collie Hills farm, which has been in Sally’s family for four generations.

Sally’s husband Wade was our chauffeur. Dogs ruffed and tumbled in the back of the truck as we started up the zig-zagging road. Wade is a font of all knowledge: the solitary lives of the rabbiters who lived here in huts during the 1930s; what’s it’s like to be dropped by heli into snow up to your waist so you can kick a path out for stranded sheep ... a side business called Wade’s Farm Talks would be wildly popular.

As we bounced and jounced, I learned that the Hakataramea River’s water is so pure, a salmon hatchery was started here in 1901. Descendants of the Native Americans who began it recently returned to restock Chinook salmon now depleted in their ancestral waterways.

The hills were nubby with grasses, and as we gained altitude, they began to resemble a candlewick bedspread in burnt umber.

Wade left to do a spot of fencing and collect us later. We set off on the path to the ridge top. Rounding the corner, I shouted, "Farking hell!".

"That’s a good reaction," Sally laughed. "We sometimes wonder if it’s just us, that we think this is amazing, but other people might not."

The view towards mountains from the Collie Hills.
It’s not just them. From our vantage at 3000ft we could see the entire valley to where it bent towards Omarama and, to the left, all the way to the sea. The braided river a blue ribbon, handkerchiefs of green paddock. Visible in an instant, the violent tectonic movement that had pushed up the Kirkliston Range and raked its nails down their faces. The land undulated, surged upwards; and each of us, as we saw it, had a moment of recognition. Here you were. Its beauty was astounding.

On our way back we talked about everything and nothing, feeling lifted. We rejoined Wade and rocketed down the road, sheep bouncing away in front, to the pump station where Ronald and Anna waited with the boat.

Braided River Jet Boating subscribes to David Attenborough’s belief that no-one will protect what they don’t care about, and no-one will care about what they have never experienced. The company carries out freshwater environmental monitoring and is dedicated to the wildlife of the river.

Braided River Jet Boating takes a spin to the Waitaki hydro station.
The sparkle on the water hid the sheer muscle beneath. When Maori first came upon the rushing water it was so loud, they thought it the lament of mourners; hence the name, Weeping Waters. Damming has slowed the river’s natural flow (once greater than the Rakaia) from over 3000 cumecs to a third of that, yet the boat’s powerful engine fought the current and falling in would whisk you away in a blink.

The crisp air, the birds, the majestic hills surrounding, the jet boat skimming the stones of the braided channels: I had stepped outside my normal life and gone into the landscape.

We travelled upstream, the boat dancing on the water (complete with scream-inducing twirls) for a remarkable view of the Waitaki hydro station. A Depression make-work scheme built using picks, shovels and wheelbarrows, it has a stolid magnificence and cathedral-like windows. Welcome Swallows skipped across our bow. Fish ‘flup’d.

"They say money can buy anything," said Anna, "but it can’t buy Real." And this was at the core of the day’s experiences and true of everyone I met: their passion for what they did shone through, authentic and unscripted.

Next stop, over the bridge to Kurow and River-T Winery for lunch. From our table we could look across the rows of vines, up to where we had been that morning.

A giant platter hove into view, a veritable wagon wheel of food, carried by new owners Paul and Alisa. Alisa felt the pull back home to Kurow as part of a Covid-19 rethink, and they jumped in the deep end, taking over the business last summer during the busiest part of the season. They are keen to learn everything they can and grateful for the support of the community.

"I wake up every day and I’m excited," Alisa said, to the chink of glasses and the bumble bee hum of happy punters.

Sun catches on the hills, while enjoying a platter from River-T Winery.
Sensory overload was fast approaching, I felt full of wonder and cured meat and in need of a rest. It would be a rest like no other because *excited squeak* I was staying the night in an actual treehouse.

Elizabeth (Liz) and Andrew Hayes are the owners of Million Springs Farm in the Hakataramea Valley. The former sheep and beef, and more recently dairy, farm has been in the Hayes family for six generations and is now the proud home of Nest, a treehouse nestled within the pine forest Andrew planted on the farm with his father 30 years ago.

This is no Boys Own timber-and-nails tetanus-shot-awaiting hideout but a sumptuous private space with its own cosy fire, suspended above a panoramic view.

A treehouse, though. It’s quite bonkers.

"It is. I had a really cool one as a girl," explained Liz. "My brothers had outgrown it and so I would take my precious Viewmaster and a 50-cent mixture up there for flying fox adventures and a bit of day-dreaming. I’d always wanted a grown-up, glamorous version."

The Sauna at Nest.
It’s a long road from "let’s build a treehouse" to luxury accommodation and it wasn’t an easy task by any means, but the result is a lush lair looking out on an untouched paradise, a place where adults can feel like kids.

A swing bridge leads to a cedar sauna, reached by a walking path through woods, strings of lightbulbs like benevolent glowworms in the trees.

All of it made for a storybook ending to a ludicrously lovely day that finished in a sunken outdoor bath under the stars. The only sound was a tickle of wind in the trees and my own heartbeat.

"The valley is a path less travelled," said Liz. "We all love it to our bones. Now we’re letting other people get to know it."

Lisa Scott travelled as a guest of Nest Treehouses, Sole to Soul, River T Winery and Braided River Jet Boating. Her trip can be booked as a package or as individual experiences.

‘‘Handkerchiefs of green paddocks’’ can be viewed from Collie Hills farm.
Comment now