The four Aragats peaks, surrounding the massive caldera of an extinct volcano, form the highest point in Armenia and remain snow covered through at least June.PHOTOS: TNS
Ralph Vartabedian explores Armenia, his father’s homeland, peak by peak. It’s not world-class yet, but the views...

My son Marc and I had tromped through shin-deep snow for several hours, and by the time we reached the blustery top of the peak, we couldn't see more than 10m because of a whiteout.

Somewhere in front of us was a deep crater and the surrounding peaks of a volcanic rim we had hoped to reach. But as we stood on one of the highest peaks in the Armenian Caucasus Mountains, we were satisfied we'd made it this far.

For much of the last century, nobody would have considered the former Armenian Soviet Socialist Republic a hiking destination.

But a few decades of independence and a strengthening democratic government have given the little nation a growing reputation as an interesting, safe hiking place. We met hikers from France, England, Canada, Belgium and Australia in just a few days on the trails. 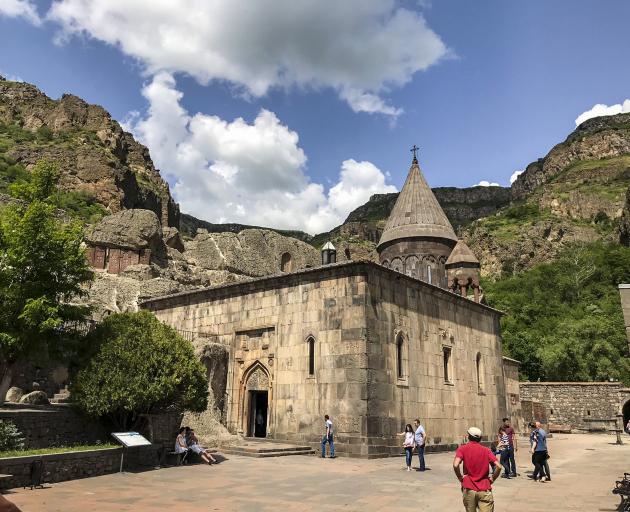 The Geghard Monastery, which translates as ‘‘Monastery of the Spear’’, originates from the spear that wounded Jesus. .
Smithsonian magazine earlier this year identified Armenia as one of the next world-class hiking destinations.

Lake Sevan is twice as large as Lake Tahoe and 300m higher in elevation. Although its waters don't have the clarity that makes Tahoe so spectacular, you won't find a traffic jam around the lake's perimeter or dense neighbourhoods of mansions.

What the country lacks in affluence is offset by the warmth of the people, whose identity is anchored to its long history. Yerevan, the capital, was founded in 782BC, decades before Rome. Between hikes, you can visit ancient temples and some of the oldest Christian churches in the world.

But anyone who frequents California's well-travelled mountains would find a few surprises and challenges in hiking or climbing in Armenia.

Wild poppies and other flowers bloom in the Armenian spring.
You often won't find marked trail heads. The weather will be unpredictable. The flora will be foreign. You might end up driving your rental car across a boulder-strewn mountain river to get near a trail. If you find a topographic map, it will probably be written in Armenian - which doesn't use the Latin alphabet.

Just how surprising travelling around Armenia could get dawned on me when Marc and I rented a car in early June in Yerevan, and the rental agent warned me that my California driver's licence wasn't strictly legal.

If I was stopped by police, he said, just offer money. How much, I asked? About $US10 ($NZ14.70) would be more than enough. Now that's the kind of advice you don't get at a US rental counter. Fortunately, it wasn't needed.

Just to get to Armenia requires a long flight that takes you to a place that's 11 hours ahead of California. That's important in planning strenuous hiking, because it takes awhile to get over that day-to-night jet lag.

But the country rewards those who make the effort. It will be a liberating experience from the crowded trails, packed parking lots and scarce back-country permits in California. In fact, you won't need any permits in Armenia.

Our campsite near Kari Lake at about 3000 metres’ elevation.
I had long searched for a good reason to visit Armenia. As I grew up in Detroit, my father often reminisced about growing up in the Caucasus Mountains in the early 20th century. Marc had just completed graduate school and had a one-week window to join me in Armenia. He spent a week surfing in Indonesia and flew west, and I flew east.

After a day of exploring Yerevan on foot, we planned for three or four days of hiking. On the way to Dilijan National Park, we stopped at the Sevanavank Monastery, two 1100-year-old stone churches overlooking Sevan Lake.

We went on two hikes in Dilijan National Park, one to pleasant back-country Gosh Lake, along the Transcaucasian Trail, or TCT. At the lake, we met a Canadian hiker who seemed lost. He joined us, and we gave him a ride back to the city of Dilijan.

A few days later, I met park superintendent Armen Abrahamyan at the park's headquarters just outside Dilijan. The park now has 200km of trails, about half of them on the TCT, he said. Some of them are Jeep roads, although we didn't encounter vehicle traffic on our hikes. The TCT will eventually extend from Georgia through Armenia, covering 3000km and connecting existing and future national parks.

The second hike took us to the ruins of the 11th century Jukhtak Monastery, deep in a forest. I imagined how people, isolated from the rest of the world, would hike to that mountaintop 1000 years ago. It seemed such a far cry from driving to a church parking lot these days.

The Garni Temple was built in about AD100, before Armenia became the world’s first country to adopt Christianity.
The main objective of our trip was Mount Aragats, the highest peak in the country, about an hour's drive east of Yerevan.

I found a crude digital topographic map of Aragats on the internet that a graphic artist at the Los Angeles Times was kind enough to print. I wasn't sure there was an actual trail, and we didn't have time to find our own route.

I quickly realised we would need a guide. A hiking brochure, produced under the sponsorship of the US Agency for International Development, advised guides for many of the much less ambitious hikes in Armenia. The only problem was finding a good one.

I talked with Armenian travel agents, Armenian journalists and Armenian aid officials. I found hiking guides online and tried to email them. I talked with a couple of guys with the Armenian Hiking Society whom I'd met on the Sam Merrill Trail above Altadena, California.

It wasn't until I got to Armenia that things fell into place and I met Hovik Mizrakyan, a jewellery designer and strong hiker affiliated with FindArmenia.com. Marc and I camped the night before at subalpine Kari Lake. There were no fire pits, picnic tables, fee stations or infrastructure you'd expect when car camping.

We met a group of Belgians camping nearby, led by Nver Avetisyan, a friendly mountain guide. He drove the only Dodge Caravan we saw on our trip. He invited us into his dining tent for some tea and coffee. We brought a bag of ripe cherries we had bought earlier and talked about the future of democracy in Armenia.

Our last dinner in Yerevan included a trout from Lake Sevan, a tomato salad and stuffed grape leaves.
If you go

WHERE TO EAT
Lahmajun Gaidz, 5 Nalbandyan, Yerevan. lat.ms/lahmajungaidz. Terrific lunch fare (we tried lamb and beef lahmajun, a kind of Armenian pizza) just off Republic Square. Lunch for two was less than $US10. For the hikes, we had brought energy bars with us. When we camped, we bought some shawarma wraps (meat wrapped in pita).

GEAR
If you are planning to day hike, you’ll obviously want the standard equipment: day pack, lightweight boots, good rain gear, water bottles, sunscreen and lots of moisture-wicking clothes. If you are backpacking, keep in mind that camping-stove gas will be difficult to find and that you can’t take it with you on the plane.