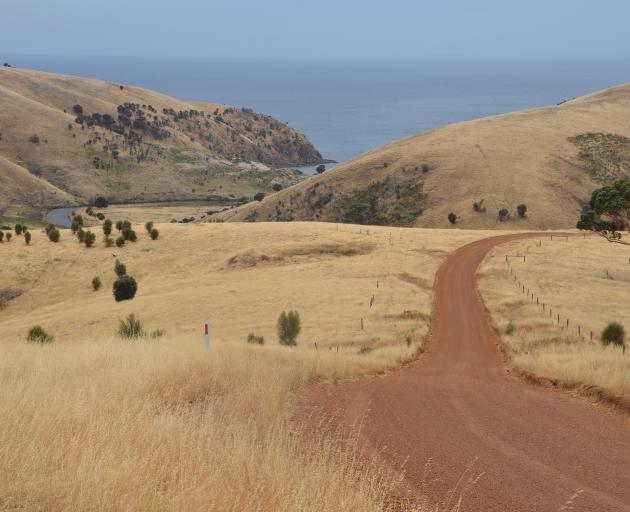 Scenic Kangaroo Island. PHOTOS: SANDIP HOR
Sandip Hor does a bit of time-travelling  to the Australia that once was with a trip across the Ditch with a difference:  to South Australia’s Kangaroo Island.

"Can you suggest to me a destination in Australia, naturally amazing but somewhat different to the rest of the nation," asked Debbie, my friend from Christchurch.

With the recent introduction of quarantine-free travel, she, like many other New Zealanders, has been planning a trip across the Tasman, and her preference is to experience something a little isolated that doesn’t fall under the traditional tourism banner.

Drawing on my recent travel experience, I suggested Kangaroo Island, which appealed to me like a time capsule of Australia as it once was, with plants in abundance, native animals and delicate ecosystems unchanged for thousands of years.

Honestly, I haven’t come across a similar environment in Australia.

Naturally amazing, it’s one of Mother Nature’s wondrous creations. She has set it up with towering and colourful sea cliffs, lush rolling fields, footprint-free beaches, ribbons of native vegetation and thrilling wildlife. 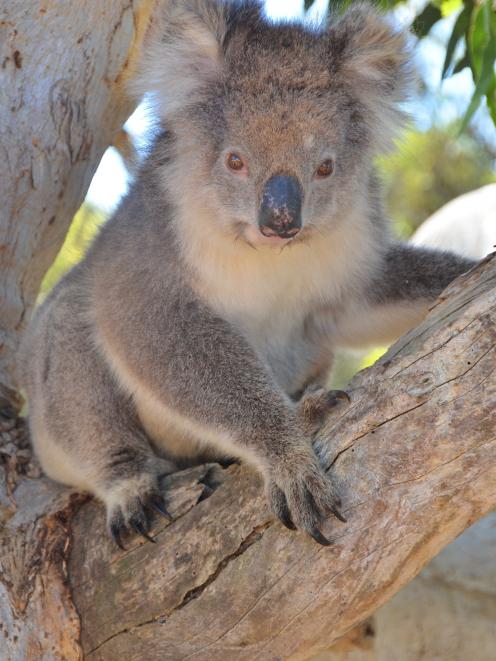 Kangaroo Island is a great place to spot koalas in the wild.
Just 110km south of Adelaide in South Australia, Kangaroo Island is 155km long and 55km wide, separated from the mainland at Cape Jervis on the southern edge of the state by a 15km stretch of ocean.

Just over 4000 people live there in an area six times the size of Singapore.

There are no traffic lights, fast food outlets like McDonald’s or KFC, nightclubs, shopping malls or high rise buildings — none of the typical elements of daily urban life.

Locals hardly lock their cars or houses, and the five or so police personnel guarding the residents have an easy job.

This does not mean a shortage of decent amenities for visitors.

The island boasts some good hotels and eateries to make the stay comfortable and gastronomically delightful, while efficient mobile service and Wi-Fi provide connectivity with the rest of the world.

Encountering Aussie wildlife in their own habitat is a special attraction of Kangaroo Island, often referred to as Australia’s zoo without fences.

The island is in their name.
First come the kangaroos, in abundance across the island.

Back in 1802, a large number of them greeted English explorer Matthew Flinders, who seized 31 of them as a fresh meat supply for his hungry crew and in gratitude named the southern discovery Kangaroo Island.

Besides kangaroos, there are wallabies, goannas, koalas and echidnas roaming free in the wilderness, while endangered sea lions, long-nosed fur seals and little penguins crowd some seafront locations. 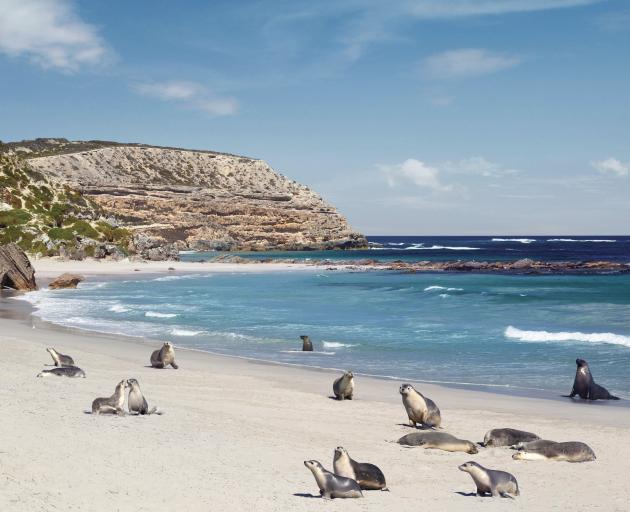 Myriad sea lions can be seen there lazing in the sun, nursing their young ones or, like an Australian surfer, playing with the waves.

The island is home to several species of birds, including rare black cockatoos and one of the world’s largest birds of prey, the magnificent wedge tailed eagle.

The land and water where the wildlife live are equally beautiful.

The 509km of coastline not only offers spectacular settings, but great sandy patches suitable for swimming, surfing and sunbathing. Vivonne Bay in the south, Western River Cove Bay, Snell Bay, Stokes Bay and Emu Bay in the north and Pennington Bay in the east are some of the most popular.

One third of the island is national parks which provide avenues for walking and hiking through the lush green vegetation.

Dominating the western front of the island, the 326sq km Flinders Chase National Park is not to be missed. 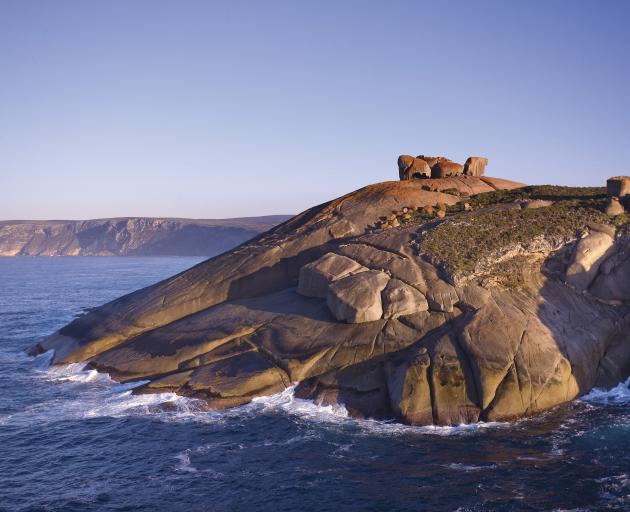 The well-named Remarkable Rocks.
This sanctuary is where nature surprises with two iconic rock formations — Remarkable Rocks, an impressive natural formation of orange-lichen-covered granite boulders by the sea, and the Admirals Arch, a stalactite-covered eroded rock bridge outside on which thousands of fur seals sunbathe.

Both are natural treasures of the island and the nation.

The history of the place is equally fascinating.

After Flinders’ discovery, then came American sealers and whalers, French navigators and English colonisers, until South Australia was formally established as a British province in 1836.

Kingscote, now the island’s main hub, became South Australian capital for four months, until that honour was transferred to Adelaide, on the mainland.

Farming was the principal occupation of the local people and there were soldier resettlements there after World War 2. 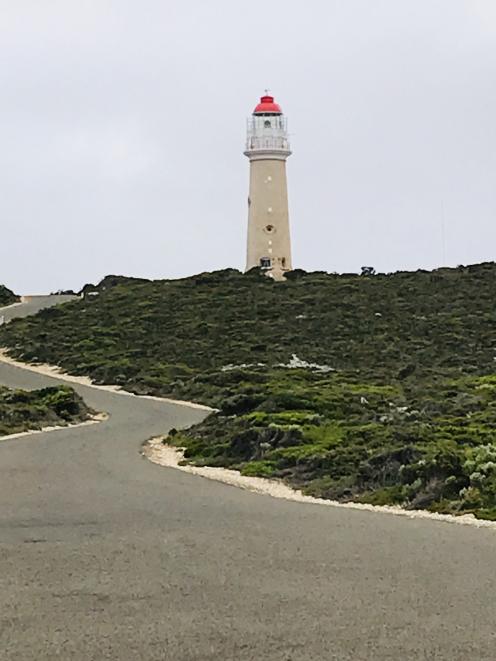 Colonial lighthouse.
Not to be ignored on Kangaroo Island is the generous food and wine scene.

The island’s unspoilt environments make the land and surrounding water a fertile place for the evolution of premium products.

Visitors have the chance to taste some of the finest seafood, lamb, locally made wine, cider, beer and gin and honey. The island is home to world’s oldest Ligurian bee sanctuary.

At times Mother Nature doesn’t hesitate to destroy her own creations with earthquakes, floods, landslips and other disasters.

Kangaroo Island became a victim of this phenomenon early last year when devastating bushfires ripped through almost half of the island, destroying infrastructure, vegetation and landscape and most disturbingly killing native animals, livestock and two humans.

Locals thought a return to its former glory might take a long time.

Nature thought differently. Fast-forwarding just over 12 months, it’s amazing to see how the entire ecosystem is bouncing back, with huge splashes of greenery emerging from a blackened landscape.

I told Debbie the bonus for her visit would be to witness nature’s renaissance.

Getting there — Air New Zealand (www.airnewzealand.com) has direct flights from Auckland to Adelaide from where Kangaroo Island can be easily reached by air, QantasLink  (www.qantas.com), or ferry, SeaLink (www.sealink.com.au).

Visit — Island Beehive (www.island-beehive.com.au) at Kingscote to enjoy honey in foods from beer to ice cream and Kangaroo Island Spirits (kispirits.com.au) to taste and buy some  highly acclaimed gins made from local botanicals.