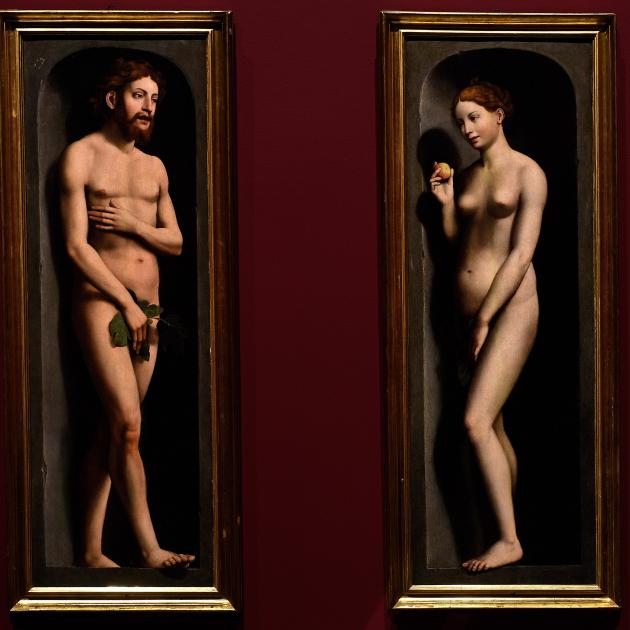 Plundered, dismantled and stolen, it’s a miracle that the Ghent Altarpiece — also known as The Adoration of the Mystic Lamb — by brothers Hubert and Jan Van Eyck, has survived. Now a forensic, seven-year restoration of the 15th-century polyptych has revealed the brilliance of its original palette and details — tendrils of angelic hair, the gleam of a copper fountain — darkened over time. To celebrate, curators at Ghent’s Museum of Fine Arts have gathered 13 of Jan Van Eyck’s 23 surviving paintings (none of Hubert’s works remain) for an exhibition that will include 10 panels from the altarpiece alongside sculptures and illuminated manuscripts by contemporaries. Elsewhere in Ghent, Eyckian-themed events will explore the work of an artist renowned for his mastery of light and detail. 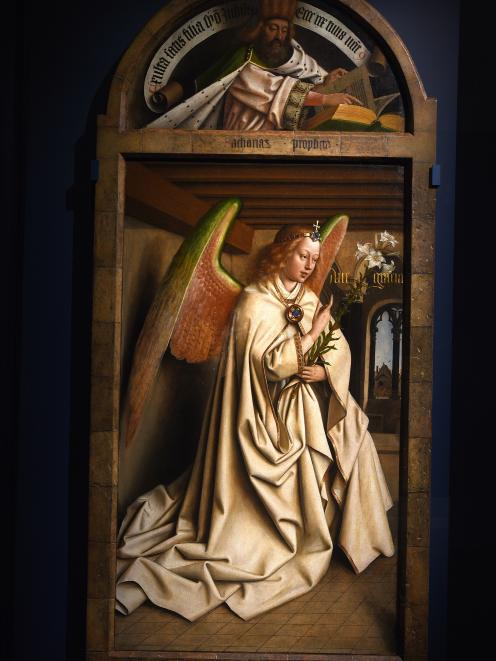 The Archangel Gabriel at the Annunciation, from the interior panels of the Ghent Altarpiece at the "Van Eyck. An Optical Revolution" exhibition at the Museum of Fine Art in Ghent, Belgium. Photo: Getty Images

Not that you need a particular reason to visit Belgium’s third biggest city after Brussels and Antwerp. Car-free, Ghent is as beautiful as nearby Bruges, but without the crowds. Arriving on a late winter’s afternoon, it felt magical: lamplight wreathed in mist, bridges reflected like gold crescents in dark waterways flanked by medieval and renaissance townhouses. But this is no twee preserved time-warp. Ghent is also home to Belgium’s largest university, which gives the place its rough-edged energy. Vinyl and vintage stores sit next to book-lined vegan cafes. Protest banners cascade from art-nouveau balconies. We saw a dancer giving an impromptu performance in the nave of a church. Ghent even has its own Banksy, the graffiti and street artist ROA, whose enigmatic animals surprised us in unexpected alleyways.

In Van Eyck’s day Ghent was the second largest city in Europe after Paris. Its fortunes were founded on grain and, later, textiles, woven by thousands of workers from wool imported from England. We began our two-day tour with a stroll along the photogenic Graslei, a quay where a 12th-century granary still stands. Nearby, a sandstone plaque of a ship marks the headquarters of the Free Skippers, who imposed tolls on boats entering the city. At Gravensteen, the medieval castle that was home to the powerful Counts of Flanders, an audio tour by a local comedian brings stark privies and dungeons to life. Gentians, we learnt, are a stubborn, wilful lot. In 1949, students protesting against the rise in price of beer stormed the battlements, hurling rotten fruit at police.

They still make beer in the medieval way, using herbs rather than hops. At the Gruut brewery you can sample it straight from vats. Under the beams in the Great Butchers’ Hall we queued for another Gentian specialty, rode neuzen — conical raspberry sweets with a gloopy centre. Dodging trams, we headed to the family-run Chocolaterie Van Hoorebeke where you can look through the glass floor to see chocolates being made. 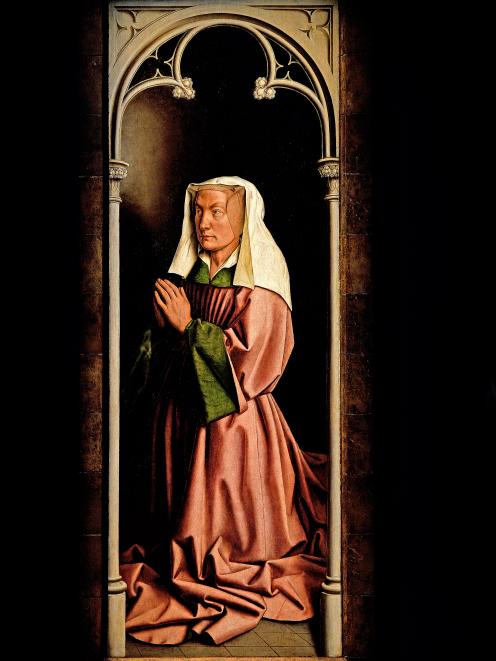 Elisabeth Borluut, who commissioned the altarpiece with her husband also appears. Photo: Getty Images
For a good view over the city, head to the 15th-century Ghent Belfry, next to St Nicholas Church in the main square. We opted for tea at 1898 The Post, a hotel in a neo-gothic former post office with a clock tower designed by Louis Cloquet, architect of the grand St Pieters railway station. A stone staircase winds up to the hotel bar, where mullioned windows look on to the spires of St Michael’s Church with its splendid Van Dyck. Tea is served in English china; faded portraits and antique armchairs give the 38-room hotel the feel of a Belgian castle.

Avant-garde design has also always flourished in Ghent. In the Design Museum, 20th-century architect Henry Van de Velde’s modernist furniture cuts a dash in the wood-panelled rooms. A courtyard garden leads to the new extension filled with experimental furniture, ceramics and glassware by Belgian designers Piet Stockmans and Maarten Van Severen. The loo is another radical gesture. It’s housed in a toilet-roll shaped building marked by the sign "de pot op" — go to the loo — which also means "go to hell", in defiance of the council who refused funds for the museum’s expansion.

On Sunday, carillon bells chorused and students on sit-up-and-beg bikes clattered across cobbles. We visited the flower market and the quayside book stalls, where I bought a book from an Englishman who has lived here since the 1980s, but confided he had yet to master the Gentian dialect: "I speak two languages, English and rubbish." A riverside walk, past houseboats and barges took us to Stam, the city museum set across 14th, 17th and 21st-century spaces. Displays and recordings chart the city’s ebb and flow from watery archipelago of Viking times to modern trading hub. The photographs of soot-blackened 19th century Ghent (when the textile industry rivalled that of Manchester) were oddly mesmerising. A room is laid out like a detective’s office with cuttings recounting the 1934 theft and ransom of the Ghent Altarpiece’ s Just Judges panel. One part was returned in an act of good faith. The other has still not been found.

We undertook the pilgrimage to St Bavo’s Cathedral to see the real thing. About 160,000 people visit annually to gaze at the altarpiece, which tells the story of Christ’s sacrifice. Within its elaborate frame, an angelic choir sings, saints and sinners gather around the lamb with its half human face, and faraway hills are dotted with towers and spires. The details are as real and absorbing as Ghent itself.