It’s a 10-minute ferry ride across the Sound of Iona, from Mull’s Fiohnnport to Iona’s Port Ronain, and the trip offers picture-perfect views of the abbey, whitewashed crofts on fertile turf and dormer-windowed pebble-dash houses lining the shore.

There’s limited accommodation here so it pays to plan ahead. Months in advance is recommended, Mrs McDonald explains by phone. There is no email, and no vacancy. Try Mrs Petrie, she suggests. The same. Finally a room at a B&B, Torrasa.

Iona is regarded as one of the most sacred places in Scotland. Argyll bard Duncan MacIntyre named the island, Ionad Naomh, a saintly place honoured in lands far and wide. Many visitors make a pilgrimage to the island, synonymous with Irish priest St Columba, whose arrival in 563AD began the spread of Christianity in Scotland. 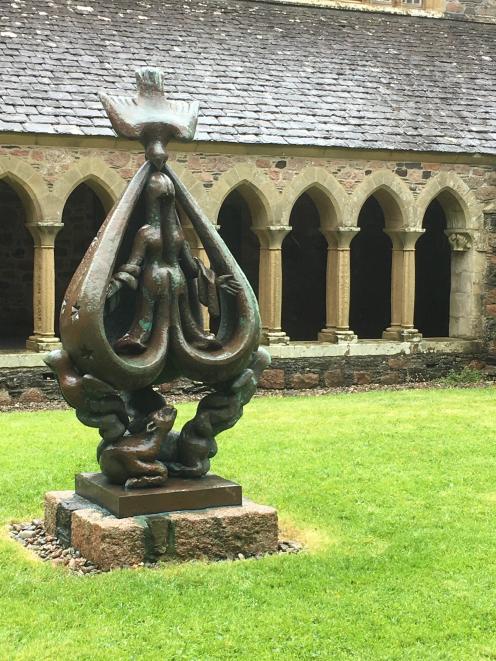 The sculpture The Descent of the Spirit in the Iona abbey cloister.

Wandering around the abbey, a favourite spot is the cloister with its sandstone flower and foliage-decorated columns and sculpture The Descent of the Spirit, created by Jacques Lipchitz in 1959.

Alongside, in the Infirmary Museum, is a replica of The Book of Kells, quite likely to have been created by scribes and illustrators on Iona and deemed by some to be the most precious object in the Western World.

The sacred isle’s heritage is kept alive by the Iona Christian Community, describing itself as a dispersed Christian ecumenical community, working for peace and social justice, and established here for more than 50 years.

There are daily prayers visitors are welcome to attend. As I slide into one of the wooden pews, a retreat member welcomes us with the thought that we come seeking a wisdom deeper than our own thinking.

It’s hard to argue against the prayerful stance that recognises economic injustice and the unfair trade that favours the rich. There are prayers for the homeless, displaced, trafficked and orphaned.

Thoughtful, reverent, gentle, I like it here and allow the 2pm and 9pm services to punctuate each day.

The time before evening prayers each night is spent at the Argyll Hotel for the most delicious of Scottish-style dinners.

All products are locally sourced, including from Iona’s notable organic vegetable garden. 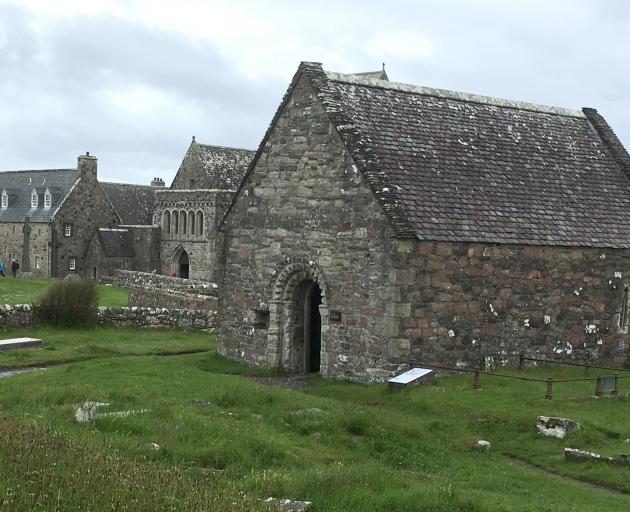 Iona's Abbey Church.
Beyond the tiny village of Baile Mòr, the ruins of the Augustinian Nunnery are a peaceful place to take stock before following the track to the well-resourced Iona Heritage Centre and Garden Cafe. You must go early for the specialty crab sandwich, a sellout. To finish, there’s a delicate Genoise sponge with blueberry and lemon cream.

In between, there’s the single length of road, delivering us to white sand beaches. Seals and dolphins bob about in the finest aquamarine sea, but in the meadows the shy corn crake I so long to see and hear, eludes us.

We do see birds. There’s a circus of puffins on the island of Staffa, which we visit on the Iolaire, run by our host Sara’s husband. As we make the approach to the island’s celebrated nature feature, Fingal’s Cave, Mendelssohn’s overture The Hebrides resounds in my head.

This cathedral-like basalt cave, formed 59 million years ago, has been an inspiration to many, from Pink Floyd to Jules Verne, Wordsworth and Tennyson.

On this uninhabited rocky outcrop, puffins congregate on the cliffs in monogamous pairs. We watch them burrow about, beaks full of grass gathered to make their one-egg nest.

An hour ashore passes quickly, the circus so mesmerising it’s difficult to leave. I keep to myself the wish for my own fluffy little Fratercula memento, not even the excuse of a grandchild to indulge.

As we board the boat, a wheel of puffins dips and dives. 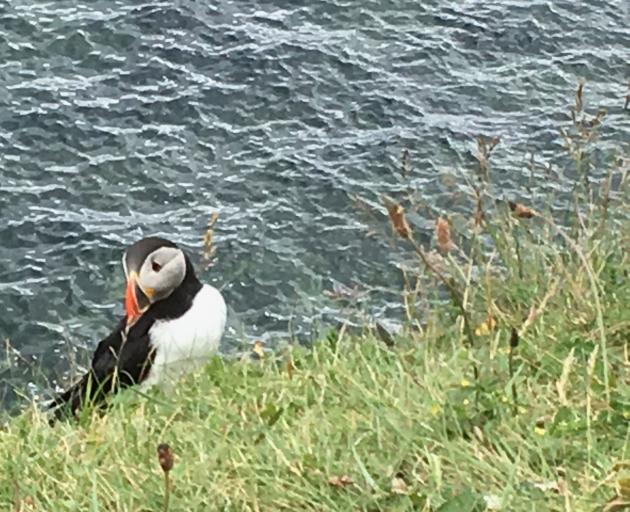 A puffin collects grass on Staffa to line its burrow
As I take my final farewell in the abbey, there is comfort in the words inscribed on the wall: ‘‘Am fear a thièd a dh’l, thèid e trì unairean ann’’. It translates as ‘‘those who come to Iona will come, not once, but three times’’. Twice now to Iona, I warmly embrace the thought of a third.

Back on Mull it is the most spectacular scenic drive so far as we make our way to Ballygowan.

Around Loch Scridain, an unexpected coffee stop, down a winding country lane to the unique Country Life-styled Tiroran House Hotel. My first sample of a Scottish flapjack, complete with a telling off for feeding the obese slobering golden Labrador.

In my defence I had hoped this would have it retreat.

As we follow the coast around Loch Na Keal, I question whether I have seen anything more breathtaking than the Gribun mountain range, replete with views of Ben More, at 966m the highest munro.

Researching accommodation on Mull had led me to B&B Lip na Cloiche, but reviews were mixed. ‘‘She seems more interested in her garden than guests’’. ‘‘Breakfast is a non event, small ends of homemade toast’’. ‘‘It felt like we were an imposition despite paying to be there’’. ‘‘Host not going to engage with any chit chat,’’ ‘‘uncaring’’, ‘‘arrogant’’. Intrigued, I book.

On arrival we take tea and biscuits in Lucy’s lounge as she suggests a day-trip to Ulva, dismissing a sea eagle charter as boring. She hates sea eagles, for they eat the new-born lambs and dominate all other birdlife. Best follow Lucy’s advice.

Ulva is a five-minute ferry trip from Mull. Vikings arrived about 800AD, renaming the fertile island Ulfeur, meaning Wolf’s Island. Now Ulva is community-owned, purchased in 2018. There are high hopes for this tiny group to repopulate. From 858 inhabitants in 1851, now five aim at attracting up to 30 new residents.

It’s a walker’s paradise with a lovely range of tracks from 20 minutes to three hours. Features include the ancient settlement of Ormaig village, Cragaig bothy, a white sand beach and Kilvekewan graveyard. My interest piques when I discover that Beatrix Potter and Wordsworth chose to holiday here. The one family on the island run the Boathouse where we dine on creel-caught shellfish, homegrown oysters and salmon.

It’s a braw (fine) cafe. From here there’s a loch to look out on, in the distance a magnificent munro. Sun, fresh seafood and Scotland leave us feeling canty (in good spirits).

When the only single resident was questioned as to his 30-year residency on Ulva, perplexed, his reply: ‘‘Look around, I never saw a more beautiful place’’. 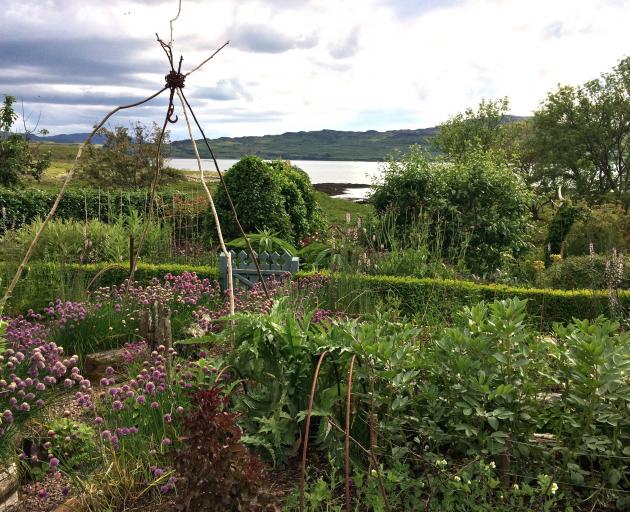 Lucy's vegetable garden in the foreground with views across to Ulva.
Our last evening we spend wandering in Lucy’s garden, this island place where the summer sun barely sets.

Lip na Cloiche, meaning edge of the rock, is an acre of steeply sloping garden complete with a traditional-style cottage Lucy has built. The nature of the site and southwest gale position would test the most determined of gardeners but here Mull has certainly found its match.

Singlehandedly, Lucy has established and embellished it with found objects from shore and land. Salvaged fishing nets, ropes and drift wood provide structure and shape along the escallonia and fuchsia hedges. I find our native hebes, olearias and pittosporums thriving here.

The luxury of a greenhouse and small vegetable plot keep the self-sufficient Lucy going.

And yes, breakfast is a simple affair. One poached egg, two slices of bacon, one piece of toast, coffee and tea.

I’m really warming to Lucy’s feisty, no-frills approach. Here, pared-down simplicity and fearless passion go hand in hand. I like her a lot. Lucy leaves an impression, holding firm, fast in my mind still. I imagine her, in the winter, the garden bedded down, gathering precious colourful stones and bleached shells. Making her cards. So carefully picked and placed, and in her fine hand, naming each shell, each stone.

And above all else, ‘‘when in some future time I shall sit in a madly crowded assembly with music and dancing round me, and the wish arises to retire into the loneliest loneliness, I shall think of Iona’’ (Felix Mendelssohn, 1829).