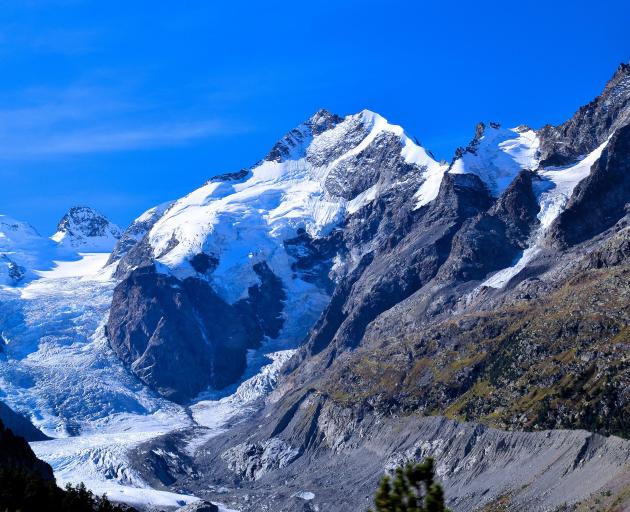 Alpine mountains and glaciers are frequently close to the railway. Photos: Roy Sinclair
Roy Sinclair takes a leisurely train ride from Switzerland's oldest town to Italy and basks in the beauty of the area.

It is said in the Bible (first chapter of Genesis) God made the world in so many days. Two human beings were added. From all accounts, it would appear God was satisfied with his effort. But that got me thinking: What if God was to make a railway? 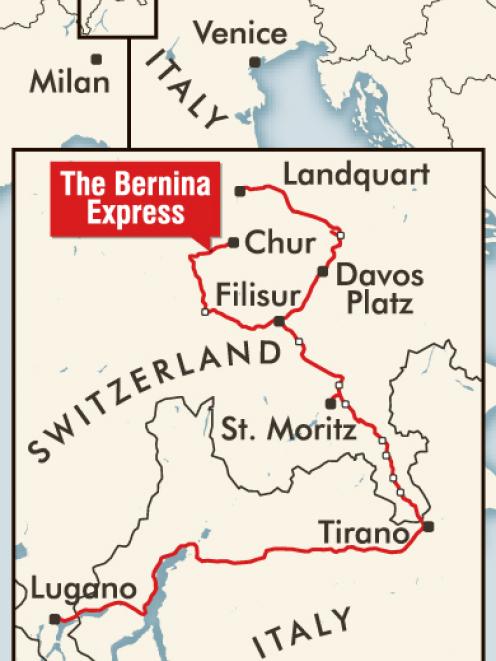 I suspect it would need to run a twisting course through wonderful landscapes. Landscapes would include mountains. Mountains typically have descending ice glaciers. Add-ons would include rushing rivers, larch forests and broad lakes. A bright red train would run through the wonderful landscape. People might need to reside along the railway. They would live in neatly manicured villages with tall-spired places of worship. Undoubtedly, God would be satisfied with the effort.

God, however, did not make this railway. He trusted that assignment to descendants of those first two human beings. God exercised remarkable patience. It took those descendants until the early 20th century to create a railway of note. It happened with the opening of Switzerland’s Rhatische (RhB) Bahn.

The railway’s remarkable engineering features combined with spectacular landscapes were eventually recognised as a Unesco World Heritage site. God would, indeed, have been satisfied. And it has its bright red train running through it. Known as the Bernina Express, it is arguably the world’s No1 scenic train ride.

My partner and I made a return trip on the Bernina Express from Chur, Switzerland’s oldest town, to Tirano in Italy on a perfect autumn day. Each way is 156km and takes just over four hours. Not exactly express train timing but it’s still an express train. 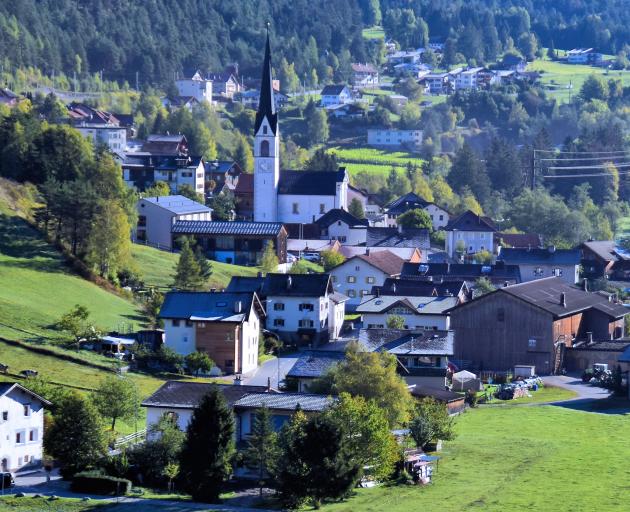 One of the many delightful alpine villages.
Overhead electric power is 1000V DC on the old Bernina line and 11kV AC elsewhere. The leading three units on our train are an ABe 8/12 class railcar built in 2010. The railcar frequently operates independently, but having a power of 20,400kW, also serves as a locomotive. The power unit operates seamlessly on both DC and AC power supplies. Swiss mountain railways are metre-gauge. The Bernina Express route is all adhesion with grades up to 7%. Carriages are modern Panorama units. They ride exceptionally well.

In the vestibule, I discovered a small window that slid down. It was perfect for my photography. An early spectacle was the Landwasser Viaduct, built in 1902. Sixty-five metres high, it is along a 130m curve leading to a tunnel portal in the sheer rock face. The viaduct is supported on six graceful arches. They were built, precariously, without the use of scaffolding. Each arch had an iron tower at its centre around which brickwork was made. Each pillar had a crane at its apex to haul up building materials. 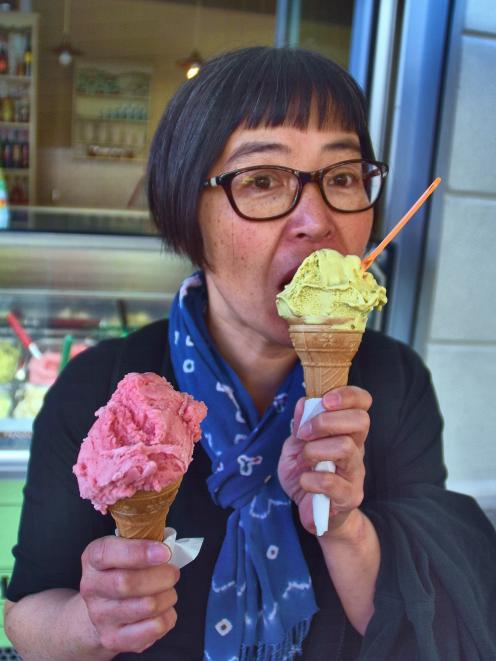 My partner, Haruko, enjoys gelato ice-cream. One of them is mine.
The railway follows the natural landscape rather than the landscape being modified for the railway. Hence much of the railway comprises spirals within mountains. Inside mountains, the Bernina railway criss-crosses valleys several times. We are informed of details via a multi-lingual commentary.

Of the many tunnels, Albula, under a pass of the same name, is the longest at 5865m. It was built between 1898 and 1903 mostly by manual labour. As with many engineering features on New Zealand’s railways, it was built with ‘‘pick, shovel and wheelbarrow’’.

The Bernina Express stops for 15 minutes at Alp Grum station. The station is also a restaurant and hotel owned by the RhB. We are able to alight to view the Palu Glacier.

It is also an opportunity for our train manager and entertainer, Renato, to deftly demonstrate his pouring of Graff Piezo schnapps. The glass is placed close to the open bottle top. As the pour starts, Renanto extends his arm full-length leaving the schnapps forming a long arch. I so do not know if this is a Swiss tradition. It was introduced as entertainment in the dining car of another famed Swiss rail journey, the Glacier Express. Seems the idea simply extended to the Bernina Express.

I pay six CHF for a glass to enable a photograph. I ask my partner to hold the glass but when she returns it, it is empty. Another six CHF is paid for more photographs. The Graff Piezo is so, so, good. 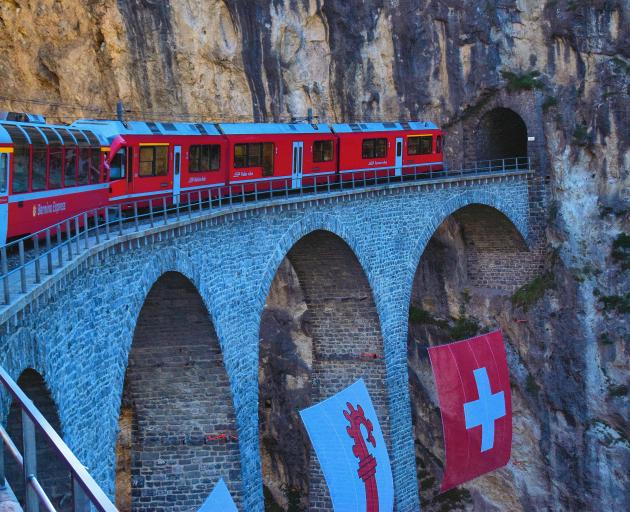 The Bernina Express continues in climbing mode until we are skirting Lake Brianco (a water storage facility formed by damming two natural lakes) and Bernina Pass at a dizzy 2253m.

A key feature along the descent to Tirano is the 107m long circular Brusio Viaduct. One of the railway’s most photographed features (albeit best viewed from above), it describes a complete circle. 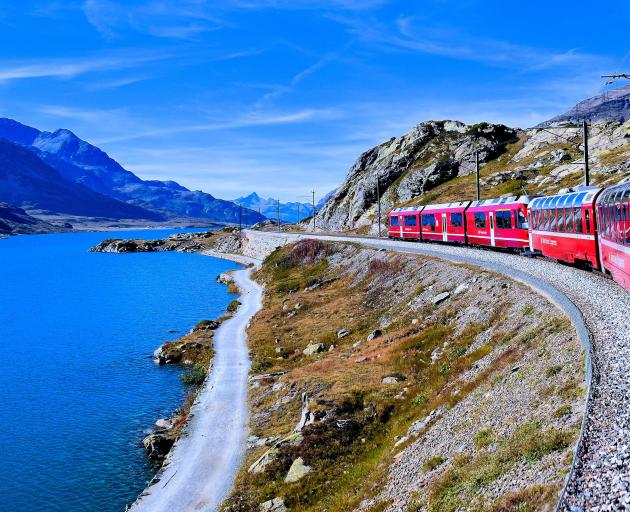 Bernina Express crosses the 2253m high Bernina Pass.
We have a one and a-half hour break at Tirano. Just time for a very Italian basil pasta lunch and gelato ice-cream. Then it is back on board to experience the magnificent train ride in reverse. As with God’s response to creations, I was very satisfied with the Bernina Express.

Note: For best value be equipped with a Swiss Pass or Euro-Rail Plus Pass. Seats need to be pre-booked. A booking fee applies.

Roy Sinclair is a keen rail devotee living in Christchurch.