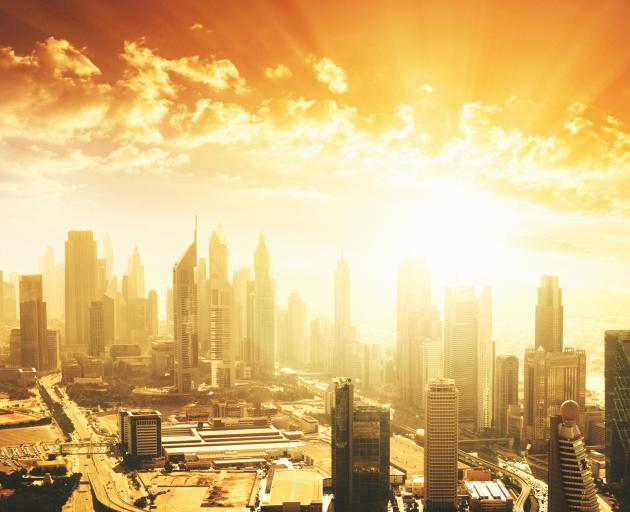 Dubai's summer heat drives its inhabitants inside. Fortunately, it does very well. Photo: Getty Images
As Dunedin prepares to shrug off its winter coat, Siobhan Downes emerges from the oven of Dubai's sweltering 50degC summer.

There comes a point in the year when the seven-minute walk from my apartment to the nearest shopping centre should no longer be attempted. That point is the height of summer, when temperatures in Dubai nudge 50degC, and life moves indoors.

What does that kind of heat feel like? It was a shock to the system for this born and bred Dunedinite. I moved to the United Arab Emirates a year and a half ago, lured by the prospect of a tax-free salary, interesting travel opportunities, and perpetual sunshine. What they don't tell you is that you will be totally dependent on air conditioning for five months of the year.

If you are foolish enough to venture outside during the hot months (May to September), you're immediately met with a whoosh of steamy air; just like when you open the oven door to check on your roast chook. Your glasses fog up faster than Jack and Rose's town car in that notorious Titanic scene.

Within minutes, perspiration starts coursing down your scarlet face, framing your newly acquired liquid moustache. Your forearms become moist and slippery, alerting you to previously uncharted sweat glands. Every step feels like wading through hot treacle; sticky and torturous.

There are no cool dark shadows in which to take refuge, no refreshing breeze. Only scorching gusts of wind, straight from the desert. As I write this, a sandstorm is shrouding the city in a blanket of dust. It stings the eyes, scratches the throat and sticks to your clammy skin, forming a gritty layer.

It's true what they say about mirages in the desert. Mine is always a grapefruit Fruju. I swear I can see the icy treat bobbing up and down, out of reach, 12,000km away.

Don't even think about trying to send me goodies from New Zealand though, they won't survive the journey. The last time I received a care package from home, I opened the box to find a congealed puddle of Whittaker's, and a single mis-shapen pineapple lump.

So, how does one cope with summer in Dubai? You quickly learn how to overcome some unique challenges: such as discovering the cruel heat of the sun has sizzled your water supply, causing hot water to come out of your cold tap.

An apartment building with a chilled pool is as coveted as a scarfie flat with a working heat pump. But if you don't have a pool, there's a plethora of five-star hotels that kindly let the local riff-raff use their facilities. You'll pay a fee, of course, anywhere from $40 for a lounger at a standard hotel pool to $800 for an air-conditioned cabana with its own personal butler service at the famous sail-shaped Burj Al Arab.

Going to the beach for a refreshing dip isn't an option, unless you enjoy the sensation of being boiled like a frankfurter. Sea temperatures at the popular Jumeirah Beach reach a peak of about 35degC, just five degrees cooler than the sulphur pools at Hanmer Springs.

Fortunately, Dubai does "indoors" better than any city in the world. You've probably heard of The Dubai Mall, the largest shopping mall by total area on the planet. Spread over 1.2million sqm, you could fit 75 Meridian Malls inside it.

The behemoth is home to an enormous aquarium and Olympic-sized ice rink, as well as an entire "district" dedicated to designer shoes. Well-heeled tourists come from as near as Saudi Arabia and as far as China to stock up on Gucci and Louis Vuitton, making it one of the best people-watching spots in the city.

Just down the road is Mall of the Emirates, which is equally famous for its indoor ski resort, Ski Dubai. My Irish flatmate actually learned how to ski on the 85m-high slope, which juts out of the mall's roof like a carrot nose on a snowman. You can also enjoy snowboarding, tobogganing, and penguin encounters. Yes, there are real penguins living inside the mall.

My standard weekend activities are far more low-key. I see a lot more movies here than I ever did in New Zealand. The air-conditioned cinemas are my personal oasis. Some are kept so chilly you have to bring a jersey with you; literally the only reason to own one in Dubai. It's also a cheap form of entertainment, with a standard movie ticket costing about $12.

This being Dubai, there's always the option to upgrade. My favourite cinema offers a "platinum" experience for about $40. It's the movies equivalent of business class. Before the film, you get to relax in a VIP lounge, perusing a menu of gourmet movie snacks. When it's time to enter the theatre, you'll be escorted to your recliner seat, luxuriously appointed with a blanket, side table and call button (in case you need to order more snacks).

Most of the time though, you'll find me at home, binge-watching Netflix on the couch. But even this mundane activity is elevated by the fact you can order absolutely anything to your doorstep.

Craving a chocolate bar? Call up the shop on the ground floor of your building, and they'll bring it upstairs faster than you can say "Kit Kat". Fancy bibimbap from an authentic Korean restaurant, or a bowl of Russian borscht soup? Just look them up on one of the many food delivery apps, and a driver will zoom to your building bearing the still piping hot dishes, in 30 minutes flat.

Perhaps the greatest irony of all is that you end up spending so much time inside during Dubai's summer months that you actually suffer from vitamin D deficiency due to lack of sun. Which is why, on a recent visit back home, I found myself sitting on the doorstep on a balmy 4degC day, drinking in the fresh air and basking in the morning rays like a desert lizard. Maybe, just maybe, Dunedin winters aren't so bad after all ...