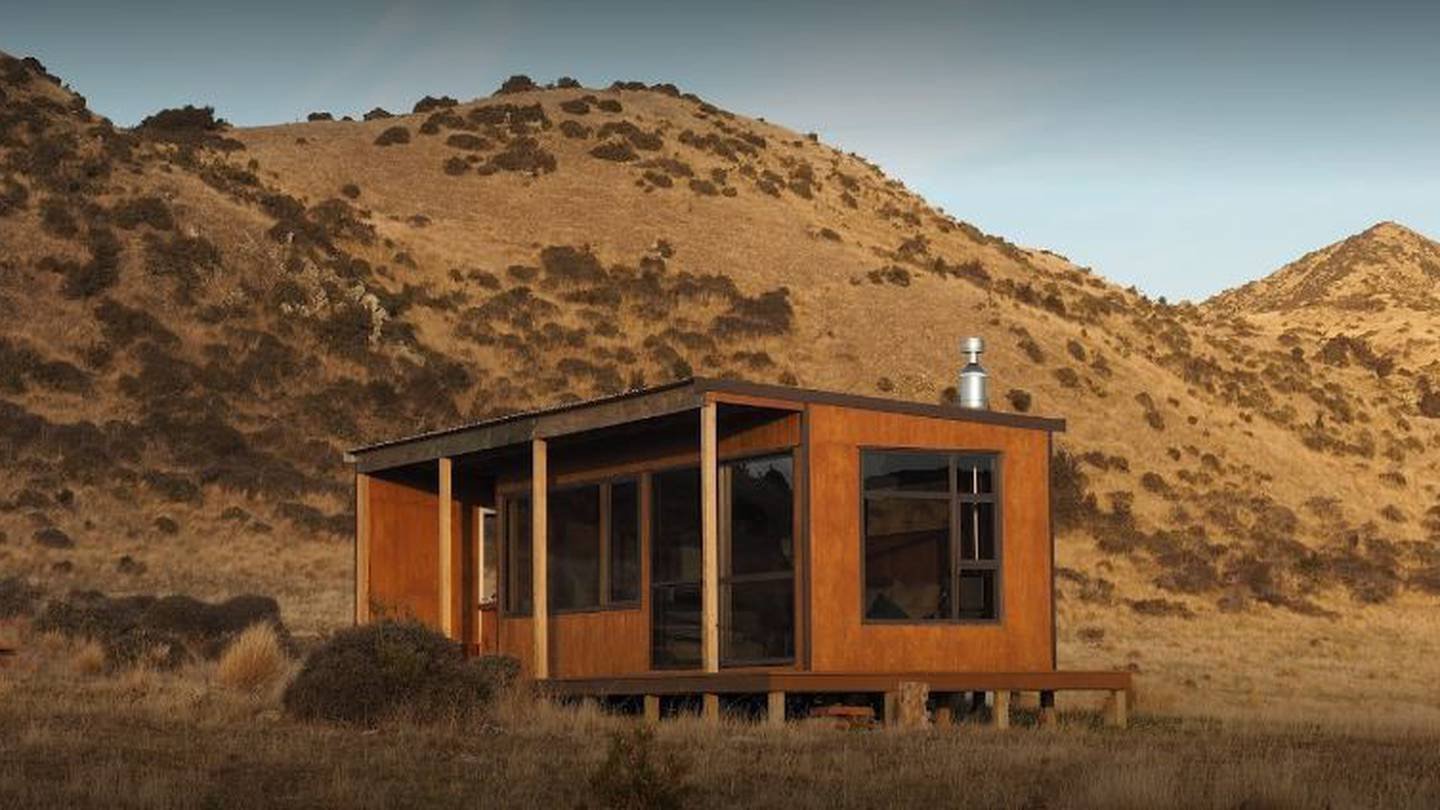 If you love peace, try a night out in this piece of art in the Hurunui Hills.PHOTO: SUPPLIED
Napier’s Mark Story visited North Canterbury’s Hurunui region for a spot of sheep spotting, ecoliving, a hot dip and some alpine antics.

It made me feel better.

I’d landed in Christchurch two hours late after missing my flight from Napier. Already ego-dented, I walked into the Garden City’s terminal to the news the region was sporting its first Covid cases.

All the talk was of a snap lockdown.

Lucky then, my first night’s accommodation was the amazingly comfortable Hurunui Hills Eco Cabin. I could easily endure a few weeks of lockdown on this rustic plateau surrounded by bracken, red rock, tussock and merino mobs. 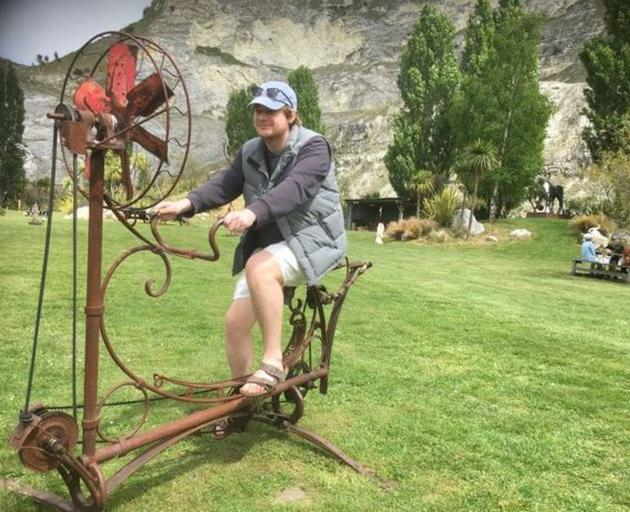 Hurunui’s former limestone quarry, Iron Ridge Sculpture Park, is part whimsy and part mind blowing. PHOTO: MARK STORY
Best summed up as a luxury alpine hut, a quick drive up a rocky track with host Maria narrating its history and purpose as a ‘‘meaningful’’ farm stay, I was hooked.

Wildflowers in a vase, deckside bean bags and gas hot water for a luxurious shower, tiers of mist and mountain - what a bolthole.

But before settling in there were a few stops needed at the Hurunui Garden Festival.

Cloudy but with occasional North Canterbury sunburst, the first garden visit was Iron Ridge Sculpture Park in the Waipara Gorge.

Part fantasy, part comedy, with a ton of beaten metallurgical experimentation, we didn’t know it, but our first garden stop was to be our best.

Raymond Herber’s workshop sits in a former lime quarry. When it folded decades ago the artist devoted years to landscaping and planting his alfresco gallery.

The result is a multi-level garden with secluded tracks, lawns, a pond and natural curious cul-de-sacs.

Limestone sculptures pepper its namesake rock backdrop, but it was the artist’s anvil-beaten metalwork that drew my eye. From large kinetic, Len Lye-esque art that moves, to static, often whimsical pieces, the quarry-cum-gallery provided visitors with something not dissimilar to a visit to a Tim Burton movie set.

Parched after stopping at a few more immaculate private garden stops from Amberley to Hanmer Springs, the Hurunui Hotel was my dinner date.

Rumour has it there’s no other establishment to have held a continuous liquor licence as long as the 150-year-old hotel. 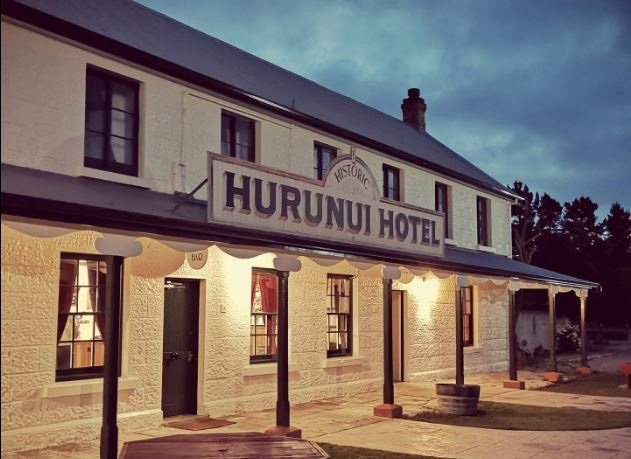 Famous for being the oldest establishment in the country to hold a licence, the Hurunui Hotel is also famous for its meals.PHOTO: SUPPLIED
The meals are as robust as its hand-hewn limestone blocks. Ribeye was brought to the table still sizzling on a stone grill to finish, while the battered blue cod was as delicate as only South Island cod can be.

A pint or two of Emerson’s Orange Roughy pale ale helped me manage the effort. That’s why a 15-minute uphill walk to the cabin was well-deserved.

With good internet coverage, I checked the Covid headlines: lockdown wasn’t happening. This was to be my only night in the cabin. Shame (for me that is).

I finished the evening off with a glass (or two) of Mission Estate red on the deck. The bottle was a little taste of home — Hawke’s Bay merlot in merino country.

The cabin’s double glazing didn’t mitigate the bleating of mothers and their lambs.

With no curtains, I opened my eyes to dozens of the boisterous wool-merchants slowly moving single file only metres from the window.

Hurunui had dawned a beautiful sunrise. But within minutes fog rolled into the hills.

My first jaunt on an outhouse compostable toilet was memorable, mainly for the fact closing the door was optional. I wondered what the gazing sheep were thinking of me on the throne. An immodest but unique start to the day.

If you ever grace the Brew Moon Brewing Company in Amberley, try their Tail Feather ale.PHOTO: NZME
I was ready for the next stop - Hanmer time.

An hour’s drive through vignettes of vineyards, dairy farms, rivers and endless irrigators, I arrived in Hanmer Village.

Surprisingly, I’d always assumed the resort jewel in the Hurunui crown was just a thermal pool — not an entire town.

As well as being the South Island’s most commonly mispronounced placename, Hanmer’s also the most hidden. It’s alpine and it’s sewn in established trees, with redwoods and other exotics dwarfing the village.

It’s Queenstown quaint, a tad Taupo and thanks to its sulphur springs, a little Rotorua on the nose.

The place was pumping. Scoffing eggs benedict in the sun from Power House Cafe was all about sharing our table with strangers, such was the volume of hungry people in Hanmer.

Friendly staff, strong coffee and the novelty of being served cauliflower with eggs bene (I’m not complaining) steadied me for the Hanmer Springs Fete.

Think of your average farmers’ market and multiply it by 10. Fare, wares, craft, art and booze, there was nothing missed. (I should throw in that this was the most mask-compliant place I’ve witnessed in lockdown).

Of all the fete’s wares, I had my heart set on a wine barrel that had been skilfully repurposed as a smoker, but that sort of girth doesn’t travel well.

Impossible to do in one go I left the fete and ventured elsewhere in the CBD only to return mid-afternoon for some icy sangrias in the sun.

The palatial Hanmer Springs Hotel was my digs for the night.

Hanmer’s a small village, so everything’s central, including this establishment. It’s so central you can grab your hotel towel and walk across to Hanmer Springs - and back again in your togs.

Convenience is everything when you’re travelling.

I’d been looking forward to the pools given they’ve been long lauded as the Ferrari of New Zealand’s hot soaks.

Pools aplenty, including family-friendly, private and myriad shapes, sizes and heats, I discovered there’s nothing quite like a dip in mineral-rich water under the shadow of the Southern Alps. It’s gotta be good for you.

Dinner at the hotel’s in-house restaurant was the culinary highlight of my Hurunui jaunt.

Crispy-fried warehou atop homemade tagliatelle in a tomato-seafood sauce. Surf ’n surf, my kinda thing. An absolute triumph in a regal dining room with views of an English-styled lawn.

Full to uncomfortable, I opened the large sash windows in my room to hear the alpine rain do its wonderful night thing.

Breakfast at Fire & Ice. A macchiato served and another order of eggs bene (I’ll never apologise for ordering it, again).

Hanmer was the perfect resort town — equal parts styley and sleepy. But I needed to head south in search of Amberley’s Farmers’ Market.

Said town is as it sounds — a small Kiwi settlement divided by its main road. You can run or bike its streets, but you’re best to amble.

The market was a far cry from the day before’s busy fete.

A relaxed lone busker in Roman sandals was crooning covers. As we passed he sang the Searchers’ well-known Love Potion Number 9.

The resort town of Hanmer Village is almost hidden in established trees.PHOTO: NZME
The sourdough merchant apologised to me that he had nothing left to sell. A successful morning for the artisan.

My last stop was a craft beer place just around the corner, a weatherboard-clad joint called Brew Moon.

I felt a tad desperate entering right on opening minute, but was eager to sample my burgeoning new love in sour beer styles, and indulged in the brewery’s pineapple and raspberry gose. Delightful.

Later, at the bartender’s recommendation, I necked a glass of the wonderfully drinkable double dry-hopped pale ale, Tail Feather. Time to go.

For my sins, Love Potion Number 9 was still playing in my head on the bumpy flight home: ‘‘I took my troubles down to Madame Ruth ...You know that gypsy with the gold-capped tooth ...’’.