Above the food market serving ramen and cookie dough is a bill of sale for a boy named Frank.

Brooklynite Nehemiah Denton bought him in 1808, and likely put him to work in his flour mill on the waterfront.

Centuries later the document was found and placed in the Brooklyn Historical Society headquarters, tucked away in a waterfront brick warehouse complex now converted into an upscale food market.

This is the starting point for our walking tour with Doug Chapman, who also works as an actor and spent five years as director of research for a leading architecture firm. That combines into a deep appreciation of the area’s buildings and the people who have worked in them and called them home. 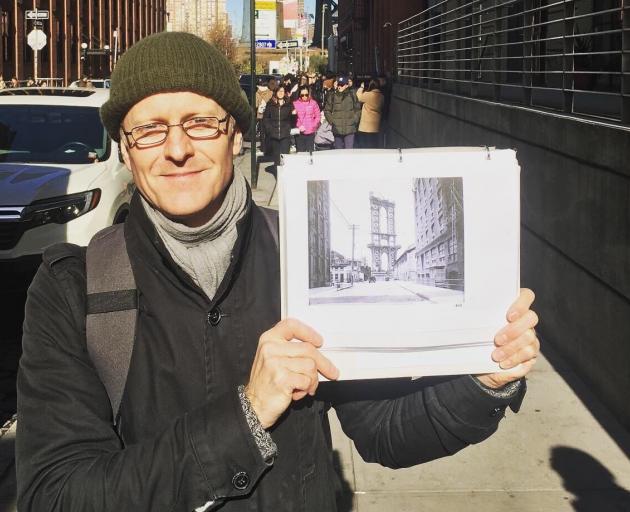 Doug Chapman of Turnstile Tours. Photo: Nicholas Jones
Turnstile Tours also runs tours of the nearby navy yard and Prospect Park and describes itself as a social enterprise, returning some of its proceeds to the historical society and other groups.

Displays at the small museum include those on the slave trade that provided the labour that built the waterfront; on the oyster beds that fed early residents but succumbed to pollution; and a 12-block coffee industry that stored more than 70% of the world’s coffee imports in the 1920s.

The centrepiece is a huge backlit lithograph depicting ‘‘the walled city’’ in 1879, high warehouses and piers lining the marshy waterfront. The adoption of the shipping container would make the buildings obsolete, Doug explains, with the need for open space, not storage, seeing port activity move to New Jersey.

The empty buildings were filled in the 1970s and 1980s by artists, who fled Manhattan’s escalating rents and named their new home with the acronym Dumbo — ‘‘Down under Manhattan Bridge overpass’’. 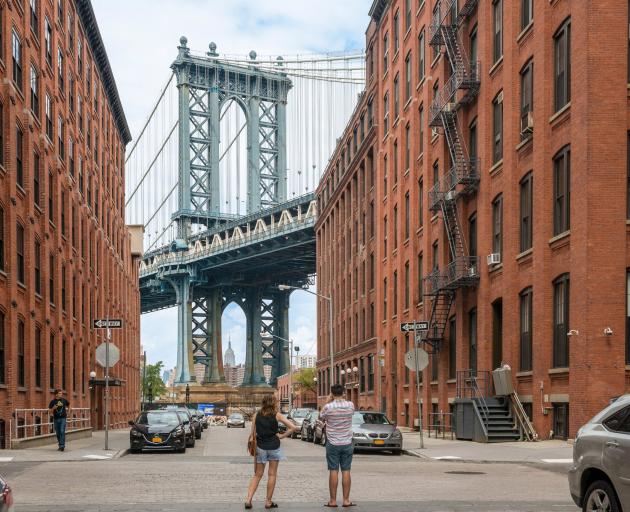 The famous view from Dumbo, Brooklyn, of the Manhattan Bridge and the Empire State Building. Photo: NYC and Company
Developers followed the artists. As we walk along Water St, Doug points out Jacques Torres chocolate store, which was given free rent by a developer who, in the early 1980s, bought two million square feet of space for $US12million.

The plan to make the area more desirable worked; just down the road is the Walentas Building, one of the first condominium blocks to rise in the area, and the beginning of gentrification that forced out most of the artistic community. 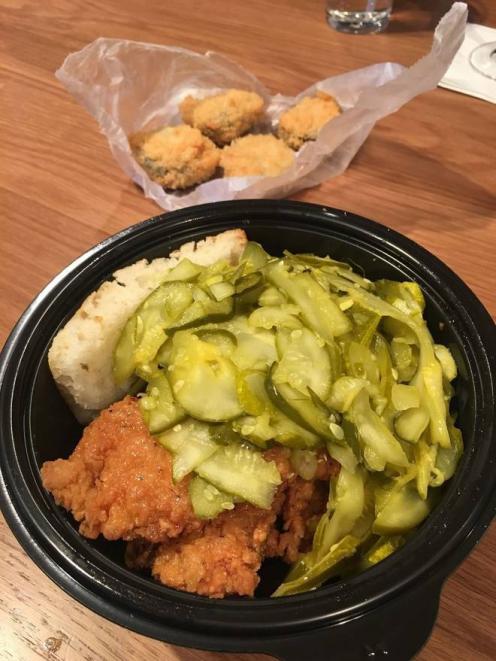 Honey fried chicken from Jacob’s Pickles. Photo: Nicholas Jones
When we reach the corner of Washington and Water St, one of the most photographed views in the city opens up; a cobblestone street leading down to the Hudson River, framed by red-brick buildings and with the distant Empire State Building perfectly framed through an arch of the Manhattan Bridge. It’s a breath-catching view, even with the dozens of tourists taking photos.

Doug’s tour gives insight into the stories behind some of the less photographed buildings that a casual tourist would otherwise likely overlook. Warehouses lining Washington St were built for Scottish immigrant Robert Gair, he explains, who was a printer of paper bags. A mistake in production led him to realise a mass-produced cardboard box could be created from cuts that didn’t go all the way through. He also saw the potential in putting branding or advertising on box sides — a big moment in advertising and branding that’s still seen in every supermarket and kitchen pantry.

We go through a brick-lined tunnel under the Manhattan Bridge overpass that is filled with tables for diners and hosts a flea market in warmer months, past faded signs for smoking pipe and envelope companies, and stop at a nondescript building where, we are informed, torpedos were made for the US Navy.

To finish, we walk along the waterfront, filled with families, joggers, dog-walkers and tourists, towards a huge carousel, made in 1922 by the Philadelphia Toboggan Company, and now restored and just as popular with today’s kids.

The hour tour is over and we’re headed for a different kind of chaos — the Time Out New York food market promises ‘‘the best of the city under one roof’’, filling two levels of a huge warehouse with stalls including some of New York’s well-known restaurants.

The recently-opened complex is a further, hyper-charged step in Brooklyn’s gentrification. I sense it’s not exactly Doug’s cup of tea. ‘‘I like to keep my lunches under $10 if I can,’’ he politely explains when asked about the market.

That hasn’t dissuaded the hundreds of people who have packed the warehouse by midday, with a controlled-chaos ordering system at each of the 21 eateries. When the buzzer beeps people go up and get their food, then try to find a seat or relieve friends who have been holding the fort.

There’s a stall dedicated to avocado on toast, another to scoops of cookie dough, and restaurants selling lobster rolls, ramen, stacks of blueberry pancakes and something called a pizza bagel. I opt for an obscenely big pile of honey fried chicken and four deep-fried Oreos (I can only eat two, total bill without tip $US19.60) from Jacob’s Pickles, which opened its first store on the Upper West Side of Manhattan in 2011.

It’s worth braving a lift with other tray-clutching diners up to the second floor, which has a bar and deck with magnificent views over to Brooklyn Bridge and the skyline beyond.

Many tourists follow lunch by walking in that direction; over the bridge and back into Manhattan. I know because we passed them in an Uber, stomachs full-to-bursting and a perfect symbol of how much Brooklyn has changed.

-Nicholas Jones is an investigative reporter at The New Zealand Herald.