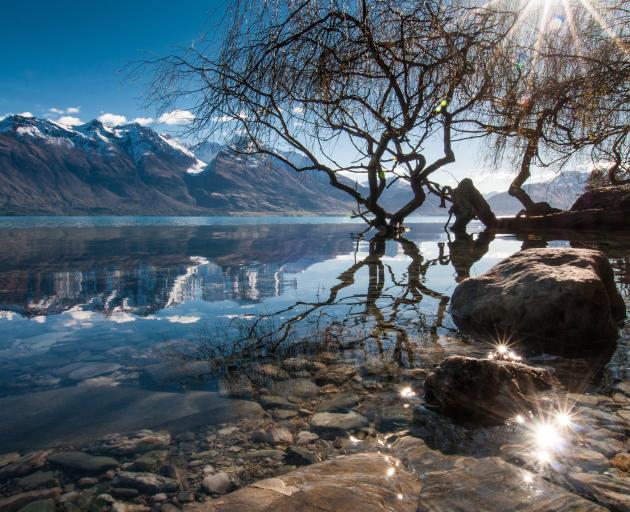 Lake Wakatipu is like a mirror as we cycle towards the Greenstone Valley. PHOTO: LAURENCE BELCHER/PARADISE PICTURES
Justine Tyerman spends some time in Paradise.

Pluto, Nox, Amphion, Chaos, Poseidon ... I was puzzled why mountains deep in Fiordland National Park were named after Greek gods. What’s more, these gods inhabited a place called Paradise. Some early explorers were evidently fascinated by Greek mythology ... like me. I've always wanted to mingle with Greek gods, and last summer my wish came true.

They were mere smudges on the distant horizon as we drove along the shores of Lake Wakatipu from Queenstown to Glenorchy where we planned to spend a few days e-biking and hiking.

As we got closer, I could see the mountains were as beautiful and as powerfully structured as the gods they were named after, some proud and majestic with crowns upon their heads, others wise and weathered as though sharp nails had scraped deep furrows in their faces. I was especially taken with Chaos, a muscular hunk of a mountain who stood apart from his fellows. 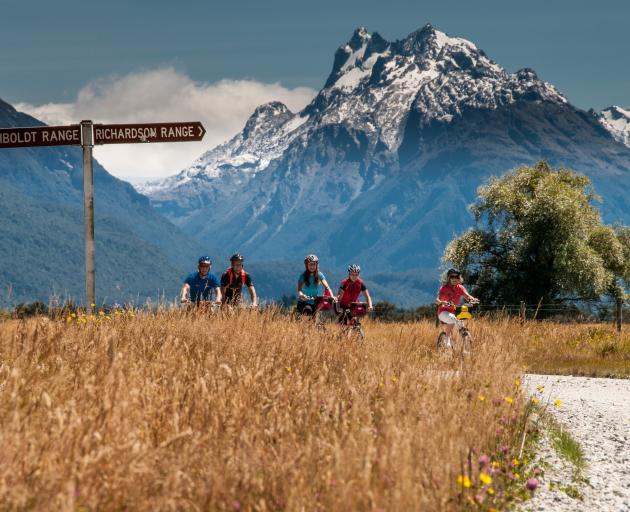 Cosmos Peak towers over cyclists en route to Paradise. PHOTO: LAURENCE BELCHER/PARADISE PICTURES
Over the next few days, we spent much time in the company of these mighty snow-capped giants and became familiar with their many faces — sparkling silver after a frost, rosy pink with the sunrise, glowing gold at sunset or mysteriously veiled in diaphanous mist just before dawn.

We explored the head of the lake on zippy Bosch-powered e-bikes, courtesy of Electric Bikes Glenorchy. It was such a novelty for me to be able to cycle effortlessly uphill and keep up with my super-fit husband. We e-biked a wonderful network of trails and country roads, splashing through clear mountain streams, pedalling up the silver-shingled, braided river valleys of the Rees and Dart, through ancient beech forests deep in ‘‘Middle-earth’’ and alongside Lake Wakatipu to the Greenstone Valley.

The Routeburn is a favourite tramp of ours so we biked to the start of the track and hiked up to the first hut — a gentle but steady climb through a forest of palest green-leafed beech trees with the crystalline Route Burn stream babbling conversationally alongside us. We crossed the river on a swing bridge and stopped for lunch on a mossy bank in warm, dappled sunlight beside a deep turquoise pool. 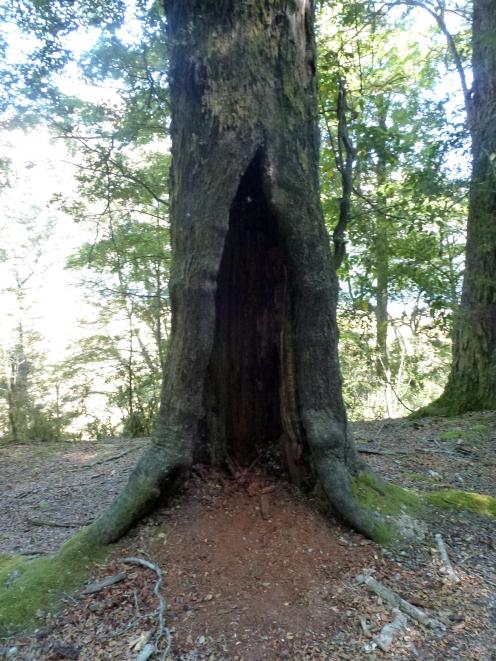 Deep in Middle-earth. Gollum's hollow tree trunk in the ‘‘Forest of Lothlorien’’ of The Lord of the Rings fame. PHOTO: JUSTINE TYERMAN
Despite its remoteness, the magnetism of Paradise was drawing adventurous travellers as far back as the 1890s, when hundreds used to sail up Lake Wakatipu from Queenstown by steamer. From Glenorchy, they would travel by dray and coach to Paradise Homestead where owner Granny Aitken would feed 120 for lunch and host as many as 28 overnight guests.

The spectacular landscape has also attracted the attention of film-makers from all over the world. Scenes from the The Lord of the Rings and The Hobbit trilogies, Mission Impossible, X-Men and Vertical Limit were all filmed amid the region’s breathtaking mountains, rivers, lakes and forests.

The dramatic terrain was sculpted by glaciers in the last Ice Age. The deeply-weathered silver schist face of Mt Earnslaw, the tallest mountain in the area at 2830m, dominates the landscape, while wedge-shaped Mt Alfred, 1365m, sits right in the centre of the valley, dividing the Dart and Rees Rivers. Surrounding the valley are the magnificent Richardson and Humboldt ranges ... and those omnipresent Greek gods.

We travelled from Queenstown by motorhome and stayed at Mrs Woolly’s superb eco-campground at Glenorchy. Our motorhome was fully self-contained, but when we felt like a night off cooking, there were excellent places to dine, including the historic Kinloch Lodge where the quality of the cuisine challenges even the snootiest of big-city restaurants.

Historic Kinloch Lodge at the head of Lake Wakatipu. PHOTO: JUSTINE TYERMAN
The pizzas we demolished the following evening at Glenorchy's GYC Cafe were tastier than any we had tried before, even in Italy ... not to mention the divine Terra Sancta Mysterious Diggings pinot noir from Bannockburn.

We took a horse trek with Dart Stables and a jet-boat ride up the Dart River, floating back down in inflatable ‘‘Funyaks’’, but sadly these outstanding Ngai Tahu Tourism activities are not operating at present due to Covid-19. Hopefully they will soon return.

To do justice to the head of the lake, one of Aotearoa’s exceptional hidden gems, you need to stay a few days in the region. The Historic Paradise Trust has well-appointed boutique accommodation and a collection of rustic back country huts with outside baths in secluded spots. There are excellent cycle and hiking trails with breathtaking views on the trust’s 300-acre property.

Kinloch Lodge has been welcoming travellers since 1868. The rooms have sumptuous modern beds and bathroom fittings, but the lodge retains its authentic, old-world charm.

As we travelled back to Queenstown on the lakeside road, rated one of the world’s most scenic drives, the mountains were upside-down in the mirror waters of Lake Wakatipu on another clear, cloudless day.

My homage to the gods evidently pleased them because the weather was near-perfect during our entire stay. Helios, the sun god, smiled upon us.

Tip: Pick up a Britz motorhome from Queenstown Airport and take your own bedroom, kitchen and bathroom with you.

What to know more?

For more information on the businesses mentioned, visit. —

Looking towards Pig and Pigeon Island on Lake Wakatipu on the Queenstown to Glenorchy road.