A breathtaking sunset over Lake Manapouri on our final night compensated for the views we missed on the Kepler ridge. PHOTOS: JUSTINE TYERMAN
Justine Tyerman silences her inner wuss and soldiers on...

Ranger  Robbie measures the wind at the top of the Kepler Track based on the reports of traumatised trampers as they stumble into the Iris Burn Hut in varying states of shock and relief.

If the gusts are so strong trampers have had to crawl along the ridge on hands and knees, Robbie estimates the wind at 90kmh. If they have lain down on the track for fear of blowing away, he reckons it’s 100kmh or so.

We only roped ourselves together, lost a pack cover over the edge and staggered from one track marker to the next, so the gusts were probably a mere 70 or 80kmh.

Luxmore Hut - a welcome sight as the weather began to deteriorate.

During our five hours on the brutally exposed ridge with drop-offs on both sides, the warning from Ranger Fay the previous night at the Luxmore Hut kept forcing its way through more pleasant thoughts about who to throttle for choosing this tramp in the first place.

‘‘Plant your feet firmly,’’ Fay said, after telling us about a young chap who had been blown clean off the ridge a few days earlier. The 18-year-old had both feet off the ground at once, running or jumping, when a wind gust threw him on to rocks below the track. 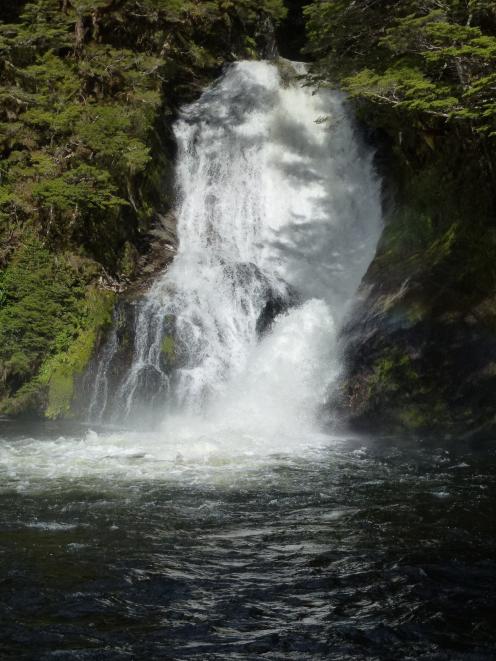 The Iris Burn Falls near the Iris Burn Hut.
He suffered severe lacerations and had to be flown out by helicopter, but he was no doubt counting his blessings that he did not end up in a freefall to Lake Te Anau 1400m below.

So, I mastered a new shuffle-style of tramping which involved keeping both boots in contact with terra firma at all times. This made progress rather slow but ensured I did not get airborne.

To keep me plodding — or shuffling — on in such grim conditions, my husband dangled my favourite snake lollies just beyond my reach. I toyed with thoughts of turning back but my tramping mates managed to convince me it was all a grand adventure ... and those snakes are pretty damn good.

Amid the swirling mist and horizontal rain and sleet which stung any skin left exposed, there were tantalising glimpses of alpine cirques left by ancient glaciers; foamy waterfalls tumbling off sheer cliffs; deep, steep-sided fiords, and quite incongruously, the occasional brilliant rainbow.

We were sadly denied the trampers’ ultimate reward for two days trudging uphill — a stunning alpine panorama of Mt Luxmore, Lake Te Anau and Lake Manapouri — but after all, this was Fiordland where wind and rain reign.

The descent was as long, steep and arduous as the ascent with many, many steps followed by 97 tight zig-zags which turned already tired legs to jelly. But once safely below the bush line, we had the shelter of the tall, mossy forest to protect us from the elements and we could push back our jacket hoods and regain peripheral vision.

A near-demented soul finally called out ‘‘Hut ahoy!’’ as the Iris Burn Hut appeared like a beautiful mirage in an oasis of beech trees. 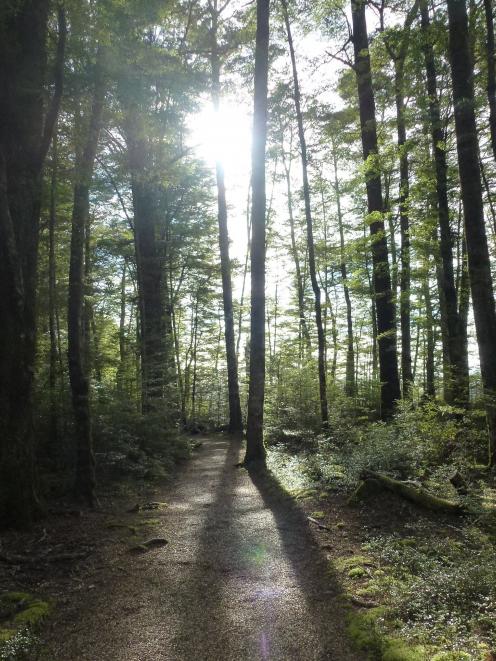 Walking through beech forest on the last day of the tramp.
Downing our packs, stripping off wet-weather gear, drying ourselves by the roaring potbelly fire and eating our dehydrated pasta with chopped up chorizo, and a thimble of red wine, made us delirious with joy ... which raises some serious questions about the sanity of those hooked on this tramping thing.

The evening passed companionably with hut mates from all corners of the globe sharing tall stories about the force of the wind, erudite debates about the relative merits of merino, Gortex and polyprops, and critiques of the weight and type of food trampers were carrying.

It’s hard to explain but wrestling all day with the elements and pushing one’s body to its physical limits seem to strip life down to simple but sweet pleasures — food, shelter, dry clothes, good company ... and a smug sense of achievement. As I snuggled into my down sleeping bag surrounded by snoring strangers, I felt enormously pleased with myself for soldiering on and not allowing my inner wuss to get the better of me.

Gale-force winds and driving rain on the Kepler Ridge.

The last two days were a gentle downhill amble in warm dappled sunshine through beech forest alongside the pretty Iris Burn stream.

Our packs, now lighter due to the food we had consumed, grew heavier again as we peeled off layers of clothes.

A breathtaking sunset over Lake Manapouri on our final night at Moturau Hut made up for the spectacular views we missed on the Kepler ridge.

The evening was mild and long - so armed with Fiordland-strength insect repellent, we ate the last of our supplies by a mirror lake as the fading light turned the layers of mountain ranges into cardboard cut-outs and the silver-gold pathway of the setting sun gradually shrank to nothing. Bliss. 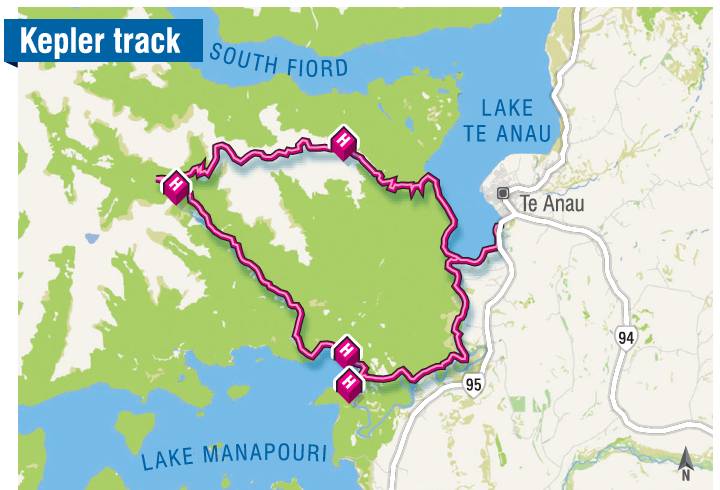 • Like the mountains it traverses, the Kepler Track is named after 17th-century German astronomer Johannes Kepler. It is a challenging, 62km, three-to-four- day loop track from Lake Te Anau over Mt Luxmore to Lake Manapouri and back to Te Anau. Towering limestone bluffs, vast, tussock-covered ridgelines and spectacular alpine vistas contrast with peaceful valley beech forests, waterfalls and mirror lakes in this wilderness adventure.

• One of 10 Great Walks of New Zealand, the Kepler opened in 1988 to take the pressure off the hugely popular Milford and Routeburn tracks. Accommodation is in Department of Conservation huts staffed by friendly, knowledgeable conservation rangers during the Great Walks season (October 27, 2020–April 30, 2021).

• Great Walks huts are the most comfortable of the Doc huts. They have communal bunkrooms with mattresses for between 40 to 54 people, water supply, flush toilets, wash basins with cold running water (but no showers), solar lighting in the kitchen and common rooms, cooking facilities with fuel, tables and seating (but no cooking utensils), and wood-burners for heating and drying clothes. Outside the Great Walks season, the huts are open but there are no conservation rangers, gas, flush toilets or running water.