Not such a small world

People walk around rides and games at Cars Land during a night session at Disneyland. PHOTOS: GETTY IMAGES
Everything for everyone in one place — that just about sums up the extent of Florida’s Walt Disney World Resort, writes Chelsea Daniels.

Welcome to a world where elephants can fly, pirates roam the seven seas and you can visit 11 countries in one day. It's a place where animals don't just talk but sing, where you can fight against dark forces and where a smile from a princess will set your heart aflutter.

With four theme parks, two water parks, 36 resort hotels and an entertainment and shopping complex, Walt Disney World Resort, in Orlando, Florida, is about the size of Hamilton. But is it worth the long trip to get there from New Zealand?

The short answer, yes. Although you'd be forgiven for thinking Disneyland in Anaheim, California, would suffice as a substitute, the reality is Walt Disney World Resort really is worth the extra effort.

In terms of flights from Auckland you're only looking at around five hours longer in the air from San Francisco and about two hours from Houston. In comparison, Disneyland California is like Magic Kingdom - which is just one park on offer in Florida. In fact, until Star Wars: Galaxy's Edge opens at Anaheim later this month, Magic Kingdom is larger by about 10ha.

What you'll experience at Walt Disney World Resort is like nothing you've ever encountered and for some, ever again. Instead of a couple of day trips from LA, it allows you to become fully immersed in the wonderful world of Walt and that's what really makes it feel like a dream.

Walt Disney World is a place where fantasy becomes a reality. Every hidden detail is there to make you feel as if you've stepped out of your life and into another, where dinosaurs roam, fairies are real and where bad guys finish last.

Everywhere you look feels like something out of the movies and entertainment follows you wherever you go, even in the form of a cleaner who stops and paints a Mickey Mouse portrait on the ground with water.

Here are the highlights and must-sees from each of the parks. 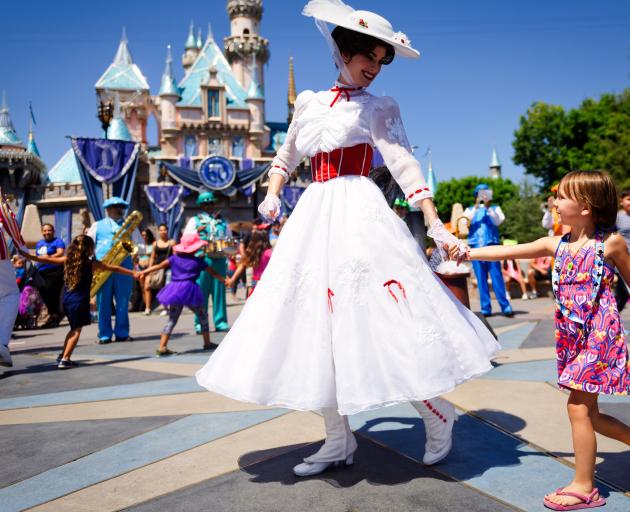 Mary Poppins leads a line of children in song and dance in front of Cinderella’s castle.
Magic Kingdom

This should be your first stop, where even the saltiest of people can't help but sweetly smile and where your childhood dreams become a reality.

It's where you can find Peter Pan taking on Captain Hook, the Seven Dwarfs going off to work on their Mine Train and a mermaid named Ariel combing her long red hair with a kitchen utensil. Little boys and girls wait patiently in line to meet their idols and their eyes widen when it's their turn to give them a big hug. Even adults find it hard not to be star-struck with Mickey Mouse himself; his jovial charm and big personality immediately win you over and make you feel like an old friend.

Be transported to countries you've never been to and places you never thought existed. Visit Africa and sing along with Simba and his friends at Festival of the Lion King. The show is world-class and Broadway performers make an effort to get everyone involved, young and old. Then see some more animals on the Kilimanjaro Safari. These ones won't joke and dance though, because they're real. Spot rhinos, cheetahs, giraffes, and elephants roaming free in this open-air, guided tour of an African savanna, which is home to 34 species living in 45ha.

As you enter Pandora - the World of Avatar you won't believe your eyes. "Is this real?'' you'll wonder as you wander, open-eyed, gazing up at the magnificent plant life and rock forms.

You'll question yourself even more when you ride Flight of Passage, a breathtaking 3-D adventure that'll make you feel like you're riding a mountain banshee. It's an experience like no other, where you see, hear, feel and even smell like you've entered another land and taken on a new life of a Na'vi hunter.

One for big kids and big Star Wars fans. Your heart will race on thrill rides such as The Twilight Zone Tower of Terror and Rock 'n' Roller Coaster Starring Aerosmith. Walk through Toy Story Land, where you've been shrunk down to the size of Andy's toys. Benches are made from used popsicle sticks, larger-than-life Christmas lights are strung overhead by chewed pencils and walls are made of giant playing cards. Step into a galaxy far, far away and get heckled by patrolling storm troopers. Even if you're not a devoted fan, you know to not admit your allegiance lies with anyone but the First Order.

Jump aboard a Starspeeder 1000 on Star Tours - The Adventures Continue with C-3P0 or meet face to face with First Order villain Kylo Ren, or trade piloting tips with legendary Wookie warrior Chewbacca. End the day with Star Wars: A Galactic Spectacular - a fireworks extravaganza featuring highlights from the Star Wars universe.

This was Walt Disney's vision of a city of the future. It was known as the Experimental Prototype Community of Tomorrow - a place to showcase innovation and urban living.

However, Disney died before his dream of a full functioning city could become a reality and the concept was shelved. What came of the idea, however, was Epcot - a theme park that could promote modern technology, with the addition of a world nations exhibit. You can visit 11 countries in a day, each one just as authentic as the last. Drink wine in France, visit Anna and Elsa from Frozen in Norway or celebrate Oktoberfest all year long in Germany.

Hang-glide above breathtaking wonders of the world on Soarin' Around the World - where you'll go from sailing above the Great Pyramids of Egypt to looking down at the Eiffel Tower as it sparkles at night. - NZME