Rich in history, rich in colour

Vibrant homes in Getsemani, Cartagena. PHOTOS: ELEANOR HUGHES
Wandering the streets of Getsemani is like wandering inside a giant paintbox where some colours are well-used, others untouched, writes Eleanor Hughes.

A salmon pink home adjoins a mustard dwelling, next to a white residence joined to a pale blue one. Opposite, a two-storey building's narrow balcony hangs above the footpath with bougainvillea cascading, cerise flowers dotting it. Among pristine homes are ones with paint flaking or faded, while crumbling plaster reveals stone walls on others. Getsemani's shabbiness adds to the character of Cartagena, Colombia.

I'd love to peer behind wooden doors which open straight on to the footpath when I hear Jose, our guide, tell us that one-room-wide homes, the majority dating from the 17th century, can extend back around 50m and within are cool courtyards. Cool would be good. Cartagena has a tropical island kind of heat which is probably why my walking tour started at 8am when the air still has a speck of freshness. 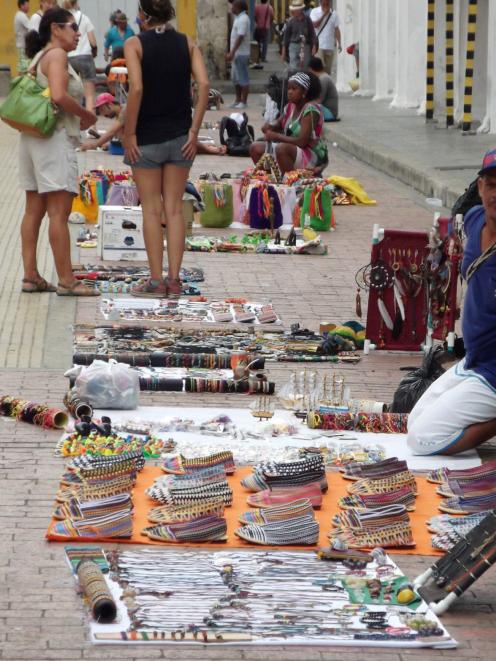 A street market in Cartagena.
We wander slowly in streets that are still asleep, shutters and doors closed. In Plaza Trinidad, a man sleeps on the ground. Perhaps, in this not so long ago crime-ridden barrio, he feels safe in the shadows of the simple, yellow 17th century Iglesia de la Trinidad. It dominates the small, rubbish-dotted square but it's a vivid blue and black Grackle, the city's official bird, emblazoned on a mustard wall from almost roof to footpath that catches my eye. It's one of many artworks that adorn walls throughout Getsemani.

In a narrow thoroughfare, the sun yet to brighten it, palms in terracotta pots take up the pavement. We walk on cracked, concrete roads past homes of rich hues. Painted wood grilles cover windows, and lanterns hang above doorways. A teenager bikes past in the otherwise deserted street. I could live here. It's far from my imagined Colombia - scared-to-walk-down streets and populated by drug lords. This is quaint ... but the heat ... and house prices can apparently hit $US1million ($NZ1.5million).

Parque Centenario's greenery is a contrast from Getsemani's dusty, concrete roads. A sloth was seen here yesterday. Strolling through, I peer up into the canopy but am disappointed. I don't even spot a bird.

The 13km stone wall built in the 17th and 18th centuries to protect Cartagena from pirate attacks looms ahead. To the left is a peek of the Carribbean which bore those plunderers to this long ago port of riches - gold, silver and emeralds were shipped from here to Spain. A busy road separates park from wall. After Getsemani's centuries-old streets it's a reminder of the modern world as are distant high-rise buildings. We walk the pedestrian crossing leading to Torre del Reloj, the clock gate, and enter the middle archway.

Torre del Reloj in Cartagena.
Have I stepped back in time? The vast, triangular Plaza de los Coches lined on two sides with Spanish colonial, mainly mustard and white, balconied buildings, is virtually deserted. Early morning sun shines behind a solitary, bronze statue of Pedro de Heredia, who founded the city in 1533. African slaves were first brought to Cartagena in 1564 and with little sign of modernity, covered arcades hiding the stores beyond, it's not hard to imagine the slave markets that were held here. 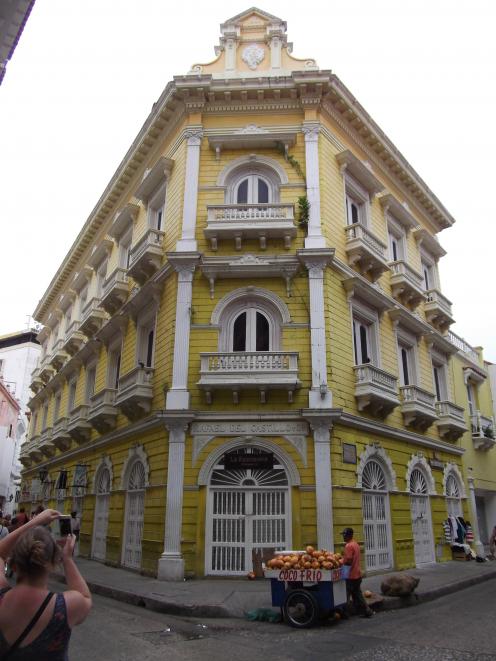 Rafael del Castillo building in Cartagena.
"The people of Cartagena are a mixture of the original native Indians, Spanish colonists and African slaves,'' Jose says.

Which explains why, when I disembarked the plane, saw the people, palm trees and beach, I felt I'd arrived on a Caribbean island. The man who approaches selling Panama hats could be a descendant of those Africans.

Pedro Claver, a Spanish monk who dedicated his life to caring for the thousands of slaves lived around the corner in the convent now named after him. Bell towers, like sentries, flank the stone Iglesia de San Pedro Claver in the coral pink-bricked plaza which resembles an outdoor art museum. Metal sculptures portray traditional life in Cartagena - among them four figures play a game at a table and a woman works at a sewing machine. Another pushes a cart and we see the real thing on street sides. To quench their thirst, several of my group buy coconuts from a man pushing a loaded wooden barrow. I hand over my pesos for diced watermelon to a women at a cart laden with tropical fruit.

Walking down a narrow, leafy calle is a chance to be out of the sun, although it makes little difference in the sweat trickling down my front. I spot a mustard and russet bell tower with trimmings of white moulds poking above rooftops. It's ornateness is striking among the simplicity of surrounding buildings. It is a later addition to the mustard-painted 16th-century cathedral, so unassuming I don't give it a second glance, which was partially destroyed before completion by the cannons of a man who in this part of the world was a pirate, Sir Francis Drake. Models of galleons like those sailed by Spanish and pirates are for sale in cobbled squares. Laid-back sellers also display on blankets brightly woven bags, striped espadrilles, hand-crafted jewellery and maracas. 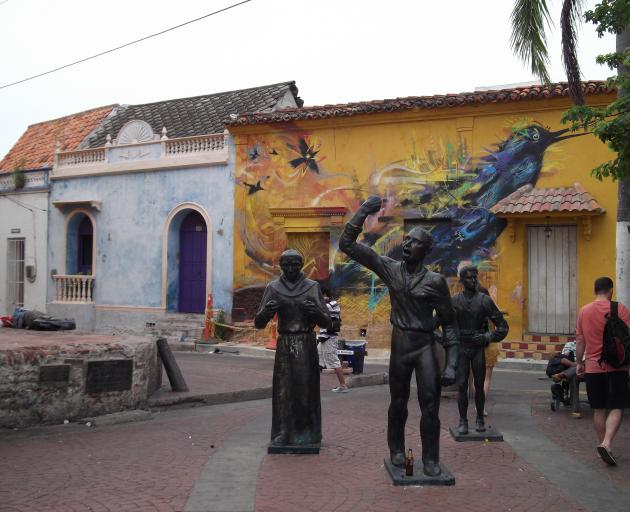 Plaza Trinidad in Getsemani.
Opposite, where a statue of Simon Bolivar on horseback stands in dappled sunlight and pigeons peck on the cobbles, is peaceful Plaza Bolivar. Probably not peaceful between 1776 and 1821 when, Jose tells us, the fate of those accused of practising black magic was publicly announced from a window in the Palacio De La Inquisicion, which stands on the square. Witches were burnt here. The palacio's imposing, dark wooden double doors are closed, hiding instruments of torture. If walls could talk ...

I follow Jose at a lazy pace, my shirt damp, limbs heavy, water bottle near empty. Narrow and wide thoroughfares that are becoming more populated are a maze. The smell of arepas frying on a pushcart makes my mouth water as I wait in shade for members of my group who got left behind photographing picturesque scenes.

Without Jose I'd be lost. But now acquainted with Cartagena, I'd happily wander alone being delighted at the turn of every corner in this easygoing old town rich in history, rich in colour.