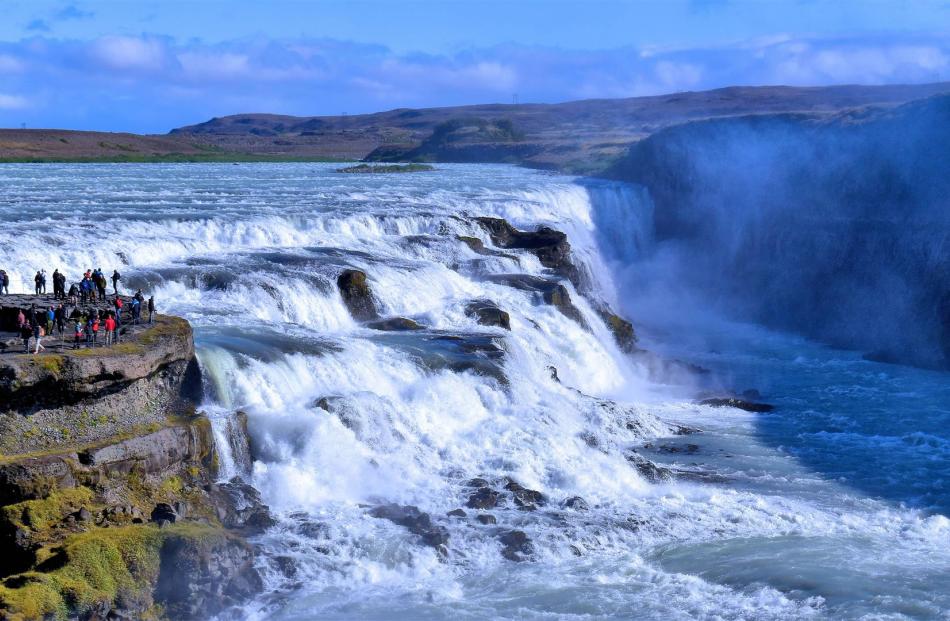 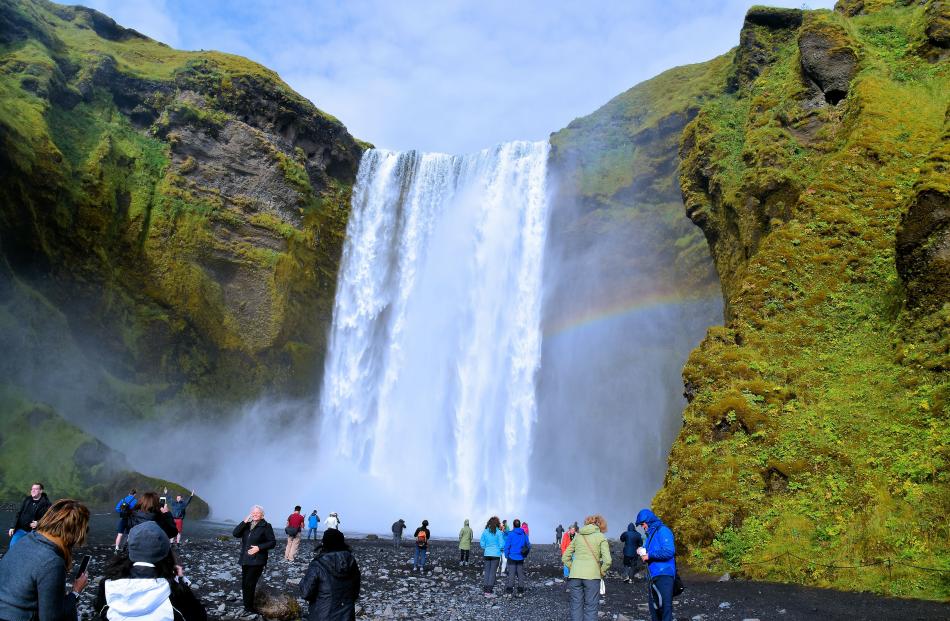 Wetting experience. Skogafoss is one of Iceland’s largest waterfalls. Folklore says in Viking times treasure was hidden behind the falls. It has never been found. 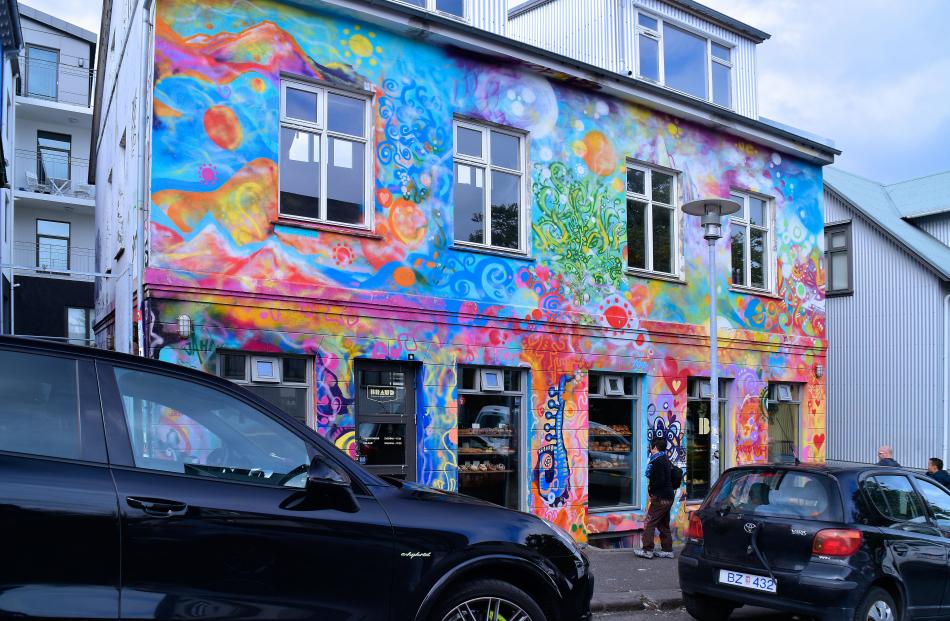 Graffiti decorates a bakery in Reykjavik, the capital of Iceland. 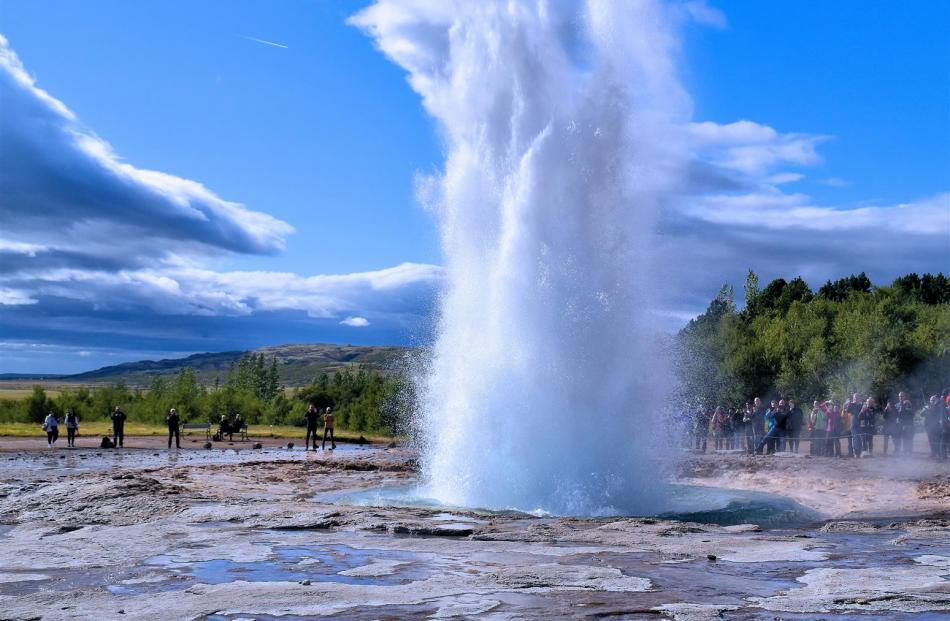 Strokkur Geysir. Iceland’s most active. Myth tells us it wouldn’t perform during a visit from the King of Denmark. Reason was the use of the wrong brand of soap. Iceland is one of five countries with active volcanoes. New Zealand is another. 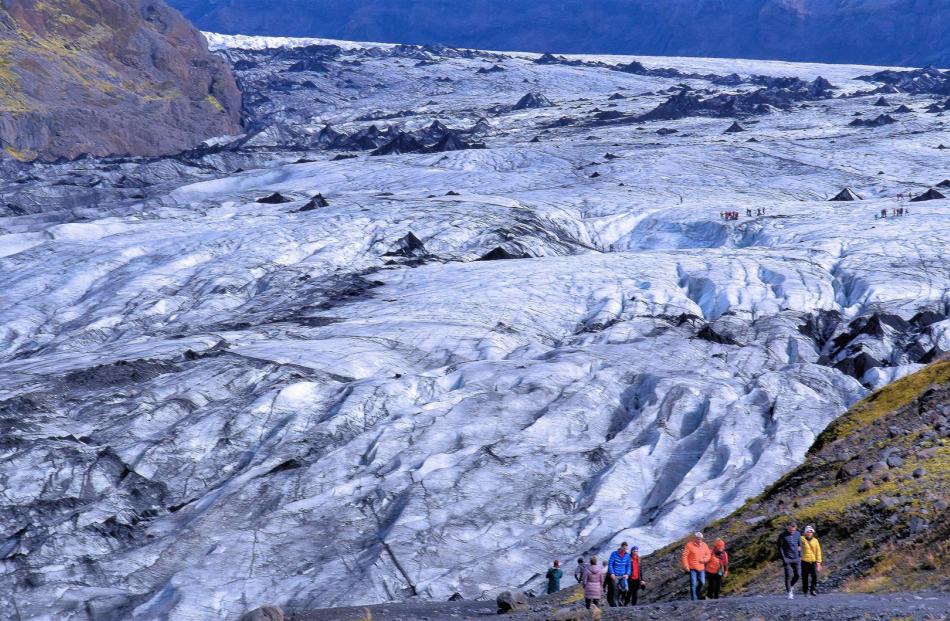 Walking to a real glacier in southern Iceland. This Myrdalsjokull glacier covers the deadly Katla volcano. 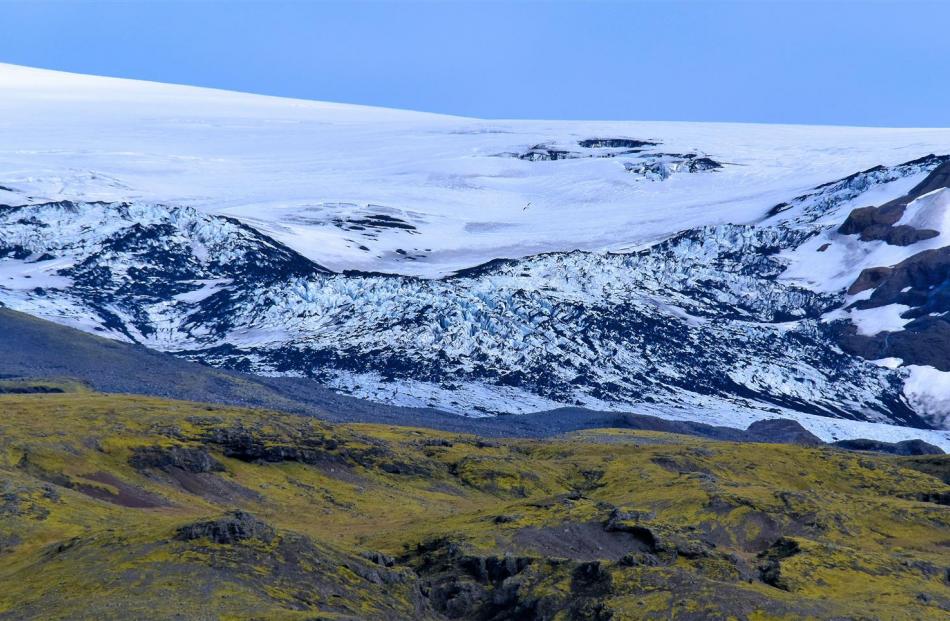 Eyjafjallajokull ice cap volcano. Its eruption in April 2010 caused havoc to air services across much of Europe. 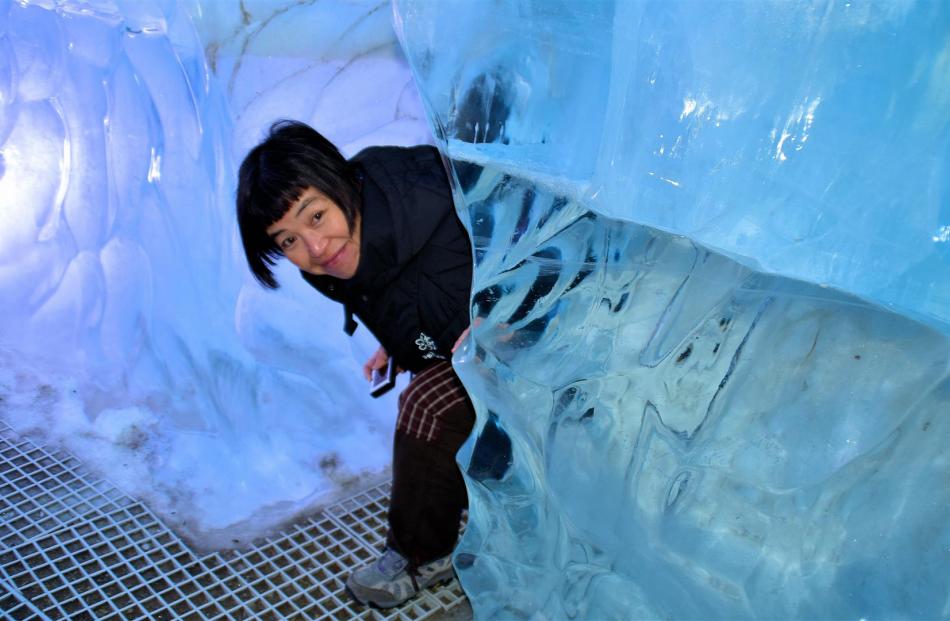 Artificial ice cave in Wonders of Iceland exhibition. The ice is from real glaciers.

Iceland, shaped by the unpredictable violence of volcanoes, glaciers and earthquakes, is the result of 64 million years of continual transformation and rebirth,
writes Roy Sinclair.

I glean this fact, and others, from the "Perlan Wonders of Iceland" exhibition, set up in an extensive complex overlooking the capital, Reykjavik. Among the extensive exhibitions over four levels is an ice cave made from real glacier ice. The top floor is appropriately a revolving cafe/restaurant. Glancing through the facts of Iceland, I cannot help thinking they could have been referring to New Zealand.

"Wonders of Iceland" is a great experience but does not quite match the excitement of venturing to the real thing. Our experience includes joining two guided day tours; one with Gray Line and the other with Reykjavik Excursions. Both were excellent and the guides were agreeably informative.

Gray Line treats us to the Golden Circle highlights to the east of the capital. A history lesson is in store at Bingvellir, where we can walk through a cleft formed by an active fault line. It is claimed this wild site is where the Icelandic state was born during Viking times. Curiously, that inaugural so-called first parliament, The Alping, agreed to introduce Christianity to Iceland. During the proceedings a runner arrived with news a volcanic eruption was sending lava towards the farm of one of the speakers. Participants questioned whether the idea of Christianity had upset their traditional Norse gods? The Alping stuck with the Christianity decision, concluding volcanic activity was merely part of Iceland's natural phenomena. These days Icelanders are typically staunch Lutherans.

The first scenic blockbuster is Gullfoss Gorge, where we are let loose to explore the furious waterfalls. In appearance Gullfoss is a threatening, dramatic, environment.

Gullfoss Gorge has been a nature reserve since 1979. It was formed when a flash flood in the Hvita River forced its torrent through cracks in basalt lava layers. The usual flow is 109cumecs. It has reached 2000cumecs.

Paths and fencing allow for close viewing. The challenge is to keep my camera lens dry from continuous fine spray.

I am amused to discover a love story associated with Gullfoss: "No-one can cross the Hvita River upstream from the waterfall, even on horseback. A 17th-century story relates to the son of a Brattholt farmer who looks after sheep upstream. Across the gorge, a saucy girl from Hamursholt also looks after sheep. They notice each other, and keep an eye on each other - the swift Hvita keeping them apart. A fondness blossoms. Eventually, the girl pleads with him to cross. He finds the shallowest place, and sets out to wade the torrent. It must have been a harrowing experience for the girl to watch, but he eventually makes it to her. How he is greeted is, sadly, not recorded. We are told they had many well-respected descendants."

Next stop is at Geysir (Icelandic spelling for geyser) to experience the thermal reserve and the active geyser, Strokkur. This was high on my wish list, preferably with a sunlit blue sky. The geyser curiously forms a large dome on the holding lake through which, moments later, it blasts. Iceland is one of five countries with active geysers. New Zealand is among the others.

Reykjavik Excursions takes us to the south coast. We pause to see the Eyjafjallajokull ice cap volcano. It infamously awakened from dormancy on April 14, 2010. The eruption was relatively small, as far as volcanic events go. Nevertheless a plume of ash rose to 9km. The ash cloud drifted south across Europe, disrupting air traffic. Ten million travellers were compromised. Reporters around the world struggling to pronounce the name Eyjafjallajokull caused a perverse sense of pride among Icelanders. Nearby we walk to the Myrdalsjokull Glacier, which sits on the larger volcano, Katla.

Katla has erupted about 20 times since Iceland was settled. The last occasion was in 1918. Volcanoes erupting beneath glaciers cause tremendous ice melting. Flash floods rising within a few hours can be 100,000 to 3,000,000cumecs. Myrdalsjokull is Iceland's fourth largest glacier, and the most southern. Icebergs in the glacier's terminal melt lake are tarnished with black ash.

The same volcanic ash formed black sand beaches along the nearby coastline.

Our day includes several waterfall experiences, one (Seljalandsfoss) we could precariously walk behind. I made the dripping experience with some difficulty. On a final steep bit, a welcome hand gave a reassuring shove from behind.

We have stunning waterfalls in New Zealand, but those in Iceland are enhanced by incredible volumes of water. Skogafoss, one of Iceland's largest, tumbles 62m from a plateau. It is 25m wide.

One looking for a thrilling, albeit wet experience, can walk a short distance up the Skoga River to the base of the falls. The mist spray ensures a rainbow when the sun shines. We enjoy a close encounter with Skogafoss. The miracle is we are not all drowned. Legend has it that behind Skogafoss one can find treasure. A chest filled with gold and other treasures was hidden there by Prasi Poroljjfsson, a Viking Settler at Skogar (Eystriskogar) around 900. It is yet to be found.