Part of the display on the whaling industry. Photos: Sara Keen
A southern museum will put you in touch with Bluff’s past, write Ron and Sarah Keen. 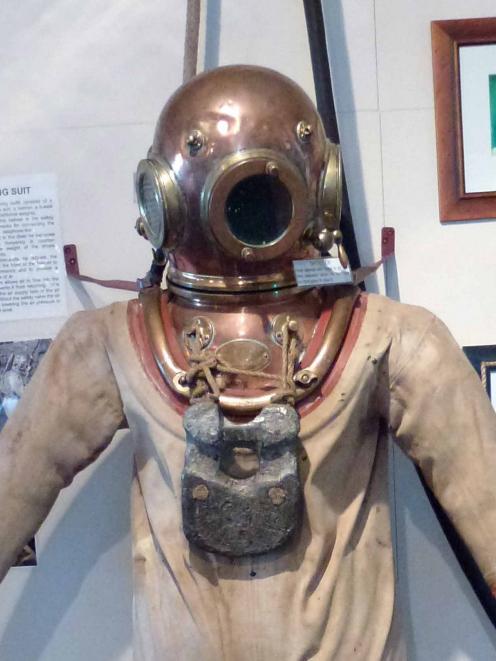 Diving equipment.
No sooner had we stepped into the Bluff Maritime Museum than I had an unexpected surprise. There, in front of me, was a picture of RMS Ruahine — the last passenger ship to be built by the New Zealand Shipping Company, in 1951. My parents and my sister and I came to New Zealand from the UK that year on her maiden voyage. A distant memory brought to life. We were so glad we stopped by this time.

We’d been through Bluff a couple of times in the past 20 or so years, both times coming to or from the Stewart Island ferry, with no time (or after rough trips back, no inclination) to do any sightseeing. During a recent trip to Invercargill we made time to visit one of our favourite places, local museums.

This museum is a history in a capsule of all that is Bluff and its surrounding seas. In the late 1700s sealers, and then whalers, began frequenting the Bluff area. The first person known to have settled there, in 1823, was William Spencer.

The town, then called Bluff Town, came into being officially in 1856. Its name, though, didn’t pass muster so it was changed to Campbelltown in honour of Governor Gore Browne’s wife, who was a Campbell. It reverted to Bluff in 1917.

The rich maritime history of the Bluff area is well set out in this excellent little museum. Each part of the history is in sections covering topics such as shipwrecks, sealing and whaling, oystering, HMNZS Southland, Stewart Island ferries, ships that have passed through (such as Ruahine), lighthouses and the huge rear, triple expansion, massive steam engine from TST Awarua that we could set going with a token. And outside you can climb aboard Monica and get a feel of how it would be to go dredging for that much sought-after delicacy, oysters.

We spent a good hour at this fascinating museum learning so much about the area’s history, both recent and past, with the added bonus that it touched my past too.

Finally, if you’re into museums, then a visit to Riverton’s Te Hikoi Southern Journey is a must.

Where:  241 Foreshore Rd, Bluff.  As you come into Bluff from Invercargill, look for a sign pointing left.