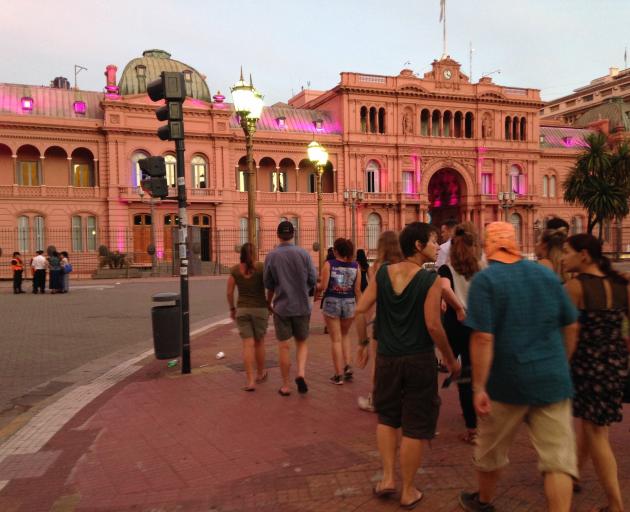 Presidential Palace at sunset.
Eleanor Hughes goes out for a meal in Buenos Aires.

The  Argentinian flag hangs limp above Casa Rosada, the presidential offices from where Eva Peron addressed crowds in Plaza de Mayo. It's tinged pinker by the setting sun. We pass by heading for Puerto Madero. The Buenos Aires I've wandered was mainly built in the late 1800s and early 1900s so I'm surprised to see, upon reaching the port area, skyscrapers across the water jutting up against the darkening skyline. Music booms from restaurants along the fairly deserted riverside, redeveloped in the 1990s, but what catches the eye is Puente de la Mujer, representing a couple tangoing. Glowing white, it stretches across the river. We stop for a drink then walk the riverfront, about 1.5km, which gets darker and quieter the further we go. There's got to be more to Buenos Aires evenings than this ...

We head uphill to Plaza Dorrego which earlier was crammed with antiques stalls - part of the Feria de San Telmo, the Sunday street market - and I find myself in what feels like an old movie set.

Intimately lit by old-style street lamps, wooden tables clutter the square. Waiters and waitresses from nearby restaurants balance trays weaving deftly among them. Lights glowing from surrounding 19th-century balconied rooms give it a homely feel. I gravitate to one end where under coloured lightbulbs strung between leafy trees sand-shoed tourists shuffle among tangoing well-dressed locals to scratchy accordion music playing over a speaker. It sounds like 1930s or '40s radio. About 30 couples of all ages dance and we watch, sipping sangria in the balmy evening, enjoying the convivial atmosphere. The dancing ends, but the plaza remains lively. We leave about 1.30am and wander hotel-wards, the wide boulevard of Avenida de Mayo to ourselves.

El Puente de La Mujer, Puerto Madero.
It's a different music scene the next night at Ciudad Cultural Konex in the suburb of Palermo. The imagined indoor event centre turns out to be an open courtyard overlooked by industrial buildings. La Bomba de Tiempo, an improvising percussion group formed in 2006, play every Monday evening. They hit the drums at 7pm. It's slow and the crowd moves like a gently lapping tide. Then it turns frenetic. Tribal beats of conga and djembe drums, maracas and possibly a saxophone in there somewhere - I can't see, being too short - makes my chest thud with the exploding rhythm. Younger ones - most of the crowd are local 20- to 30-year-olds - whirl, leap and perform moves that would put my back out. A dungareed, grey-bearded hippy looks possessed by the beats. The energy of the about 15 red-jumpsuited musicians continues for two hours. It's a workout for the conductor. Standing at the side of the courtyard in a sweating, seething crowd of maybe 1000, I don't know what I enjoy most, watching the invigorated dancers or the music that reminds me of a STOMP performance.

I do elegant the next evening.

Walking into Cafe Tortoni, opened in 1858 and the oldest cafe in town, is like stepping into what old Buenos Aires must have been like. I wend my way across the white-tiled floor scuffed with age between marble-topped tables where wooden-armed, maroon leather chairs await diners.

Photos, drawings and paintings of times gone by adorn the dark wooden walls under a high ceiling with stained-glass panels. There's so much to take in, it's worth a visit to just wander around. But I'm here for the tango show.

Tango dancing in Plaza Dorrego. PHOTOS: ELEANOR HUGHES
A narrow staircase takes me downstairs to a dimmer room seating about 60. At 8pm the stage lights up. Knee-length skirts swirl, legs kick high, sure-footed and quick, dark-suited men tango their partners across the stage.

It's romantic and slow, energetic and playful. It also incorporates a story - in Spanish. I have no idea what it's about. I'm bewildered by the appearance of a whip-cracking man. Although hard to see at times when dry ice and low lighting set a mood, the dancing leaves me wishing I could tango - especially with the tall, dark man.

I have to try a steakhouse on my last night in the city. An internet search finds the nearest, Gran Parrilla del Plata. It doesn't open until 8pm, I'll be starving ... Off Avenida de Mayo, the lifeless Calle Peru gets darker the further we walk, passing graffitied walls, neglected buildings and random rubbish piles.

On the verge of giving up and turning back, we go one more block. Thankfully, like a lighthouse, on the corner of Calle Chile the little, lit-up restaurant invites. The three tables on the dark footpath are empty. Opening the door we find the room alive with conversations and clatter.

We shake our heads and for a moment I think we're going hungry. He gestures outside; we shake our heads. I take in the butcher's tools hanging against white tiled walls and the hundreds of wine bottles lining shelves around the intimate room, and then we get lucky. Against what was probably the wooden, windowed front door of the once 1930s butcher shop, the waiter leads us to a, more for one than two, table squeezed between diners.

Sipping on Martini Biancos we start with provoleta, a grilled provolone cheese, an Argentinian specialty. Sprinkled with herbs it has a thin crunchy outside but is runny inside. It's smoky, salty and delectable.

We have a long time to study our fellow diners - locals, tourists, families. About 10pm the waiter finally strides the black and white tiled floor with a sizzling plate. Barb and I share the 700g. It was worth the wait, it's the tenderest steak I've ever had.

Walking back burns off a little of the meal. On Avenida de Mayo the net-curtained windows and doors of Cafe Tortini glow yellow. I remember the cakes on display. I have to go in. At 11pm there's only two other tables occupied in the long, narrow room. Bombon Suizo, a 2-inch high sponge with as much cream on top covered in a layer of chocolate is irresistible. The bow-tied waiter grins when I finish it. I think he's impressed. Half the slice would've done. But it tops off buenas noches in Buenos Aires.