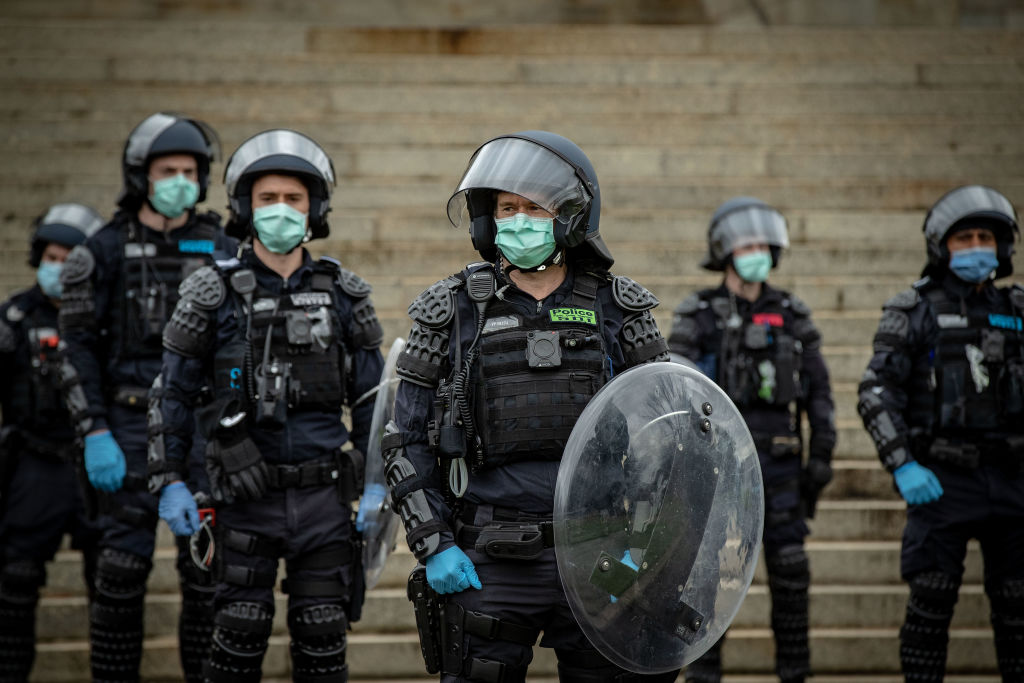 Police officers patrol the Shrine of Remembrance during an anti-lockdown rally in Melbourne on Saturday. Photo: Getty
Police have arrested 14 anti-lockdown protesters and handed out at least 50 fines following small rallies in Melbourne.

Police say they visited 90 people of interest in the preceding days and urged them not to participate.

Some walkers on the shores of the city's Yarra River on Saturday stopped and displayed signs, including "I am just exercising my human rights".

An AAP photographer witnessed three people, some in handcuffs, being led away by police, while officers directed others to move on.

There were no groups gathered and the number of people out walking - which is permitted for exercise - were outweighed by a heavy police presence.

Social media organisers of the so-called Freedom Walk suggested there might be similar actions in other locations.

Promotion of the main Melbourne event was taken down earlier in the week by Facebook.

An anti-lockdown rally was held at the Shrine of Remembrance last weekend resulting in 17 arrests and more than 160 fines being issued for breaching health directions.

When interviewed, Pecora allegedly told officers he believed coronavirus case numbers had been highly exaggerated and that COVID-19 was genetically engineered by world banks to kill weak humans.

He quoted Midnight Oil, telling police if someone contracted coronavirus at one of his events "it would be better to die on your feet than live on your knees".

He faced court on Friday accused of inciting others to protest.

Under his bail conditions he cannot use social media or contact co-organisers.

Victoria on Saturday reported a further six COVID-19 deaths and 37 new cases, which is lowest number of daily diagnoses since June 26.

There are indications on Facebook of plans to protest every Saturday until restrictions are eased.