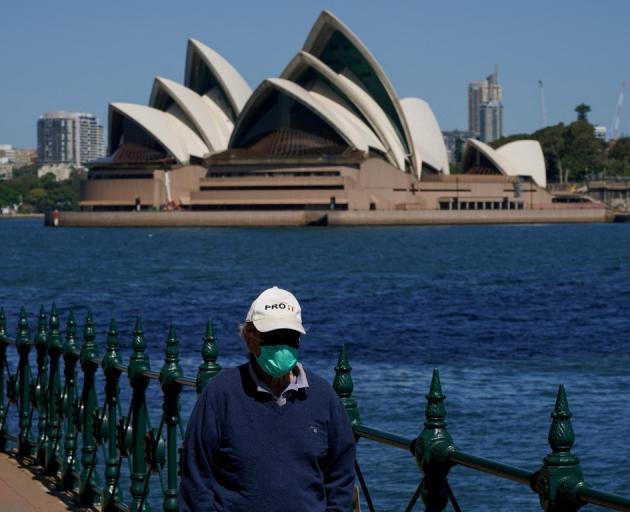 Photo: Reuters
It has taken just 10 days for Australia to record its second million Covid-19 cases, due to rising Omicron infections.

Australia has passed the grim milestone of recording more than two million Covid-19 cases since the pandemic began.

While it took almost two years to reach one million cases on January 10 this year, it took just 10 days for the country's Covid-19 tally to get to two million due to rising Omicron cases.

The figure was reached on Thursday morning, after new case numbers from NSW and Victoria came through.

NSW posted another 25 deaths from Covid-19 in the latest reporting period, with 30,825 cases.

There were a further 21,996 cases and 15 deaths reported in Victoria.

An 18-year-old is among nine Covid-19 related deaths reported in Queensland as the state records another 16,812 virus cases.

Chief Health Officer John Gerrard said the teenager had "significant underlying medical problems", and his thoughts are with the families and friends of those who had died.

Thursday's deaths also included one person in their 70s, five in their 80s, one in their 90s and one over 100.

It comes as a safe return to schools for students and teachers in the wake of Omicron will be on the table when national cabinet meets later on Thursday.

Health Minister Greg Hunt said schools were safe to reopen, despite most five to 11-year-olds yet to receive their first vaccine dose.

"(On Wednesday), 56,000 children came forward with their parents, and we will pass the half a million mark today.

"It is increasing by 50,000 a day on week days and it shows Australians are coming forward and they're protecting their children and they're helping to protect the school environment."

The interval between doses for five to 11-year-olds is set at eight weeks, and Mr Hunt said the timing between vaccinations won't be lowered to get more children fully vaccinated sooner.

National cabinet will meet to consider a unified approach for a return to schools.

However, the prime minister said how states and territories will use RATs for students and teachers will be a matter for each jurisdiction.

Finance Minister Simon Birmingham said there would be enough RATs coming into the country to meet the demand from schools.

"We are confident we can work with the states and territories around the return-to-school plan to make sure they can occur safely, securely, including the use of rapid antigen tests where necessary," he told ABC TV.

However, the Pharmaceutical Society of Australia said stock is still expected to be sparse until February, placing those in the profession under large amounts of pressure.

"In the meantime, our pharmacists are working around the clock to source their own supply of these tests, whilst juggling a huge number of enquiries from patients about stock availability," the association's national president Chris Freeman said.

"There is still a lot of confusion in the community."

It comes as the medical regulator approved two new oral treatments for Covid-19.

They include the Pfizer-made Paxlovid, along with Lagevrio, from manufacturer Merck.

The products are the first oral treatments to be approved in Australia and will be used for adults who don't require oxygen and are at increased risk of hospitalisation.

The Therapeutic Goods Administration said the new treatments are not a substitute for a vaccine.

As hospital systems across the country struggle with the influx of cases, Tasmanian senator Jacqui Lambie suggested defence force members be called in to assist.

"You have about 70,000 defence force personnel, full-time ones, and they are quite capable," she told the Nine Network.

"Give them instructions and they will follow them, they will do whatever. Somebody needs to get in and help the first responders out."