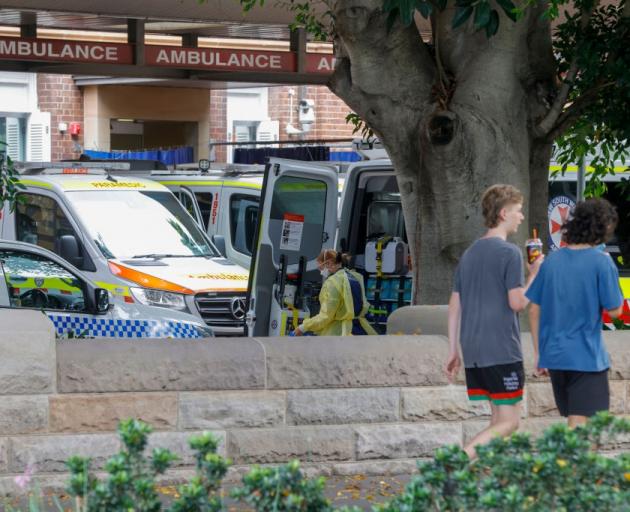 A general view of Royal Prince Alfred Hospital ambulance entrance, in Sydney. Photo: Getty Images
Australia has recorded its deadliest day of the pandemic, with 58 fatalities confirmed on Tuesday from just two states.

NSW registered a one-day record of 36 deaths, while there were a further 22 in Victoria.

The previous record was 57 fatalities, recorded on January 13, only after all states and territories had reported their Covid-19 figures.

Following an emergency meeting of the Australian Council of Trade Unions on Monday, its secretary Sally McManus said safety protections for employees needed to be guaranteed during the Omicron variant.

"At the moment, unfortunately, we're seeing some employers try to force Covid-positive people to go to work," she told the ABC on Tuesday.

"That's absolutely a red line, we must keep people safe during the pandemic, not just for them and their co-workers, about the whole community."

The unions have called for rapid antigen tests to be made free for workers to ease pressure on businesses.

Treasurer Josh Frydenberg said the strike threats from unions were stoking fear during the pandemic.

"It's exactly the wrong thing at the wrong time for the economy and for people's jobs - it's putting workers last and not first and damaging job prospects," Mr Frydenberg told Sky News.

"This is a tough time and there is no perfect solution, but Australians are in a strong position compared to the rest of the world.

"It's not a choice between one person's job and one person's health - what we're trying to do is to protect jobs and use the best medical advice to do so."

As students get set to return, NSW Education Minister Sarah Mitchell said free rapid tests would be rolled out to all schools across the state as part of Covid-safe plans.

Infectious diseases expert Sanjaya Senanayake from the Australian National University said rapid tests would be crucial for a return to the classroom.

"It has been quite successful, both in terms of compliance and minimising spread within the classroom (in other countries)," he told the Nine Network.

"So if we've got enough rapid antigen tests, and the parents are on board, everyone's on board, then it should work."

More than one-in-four Australians over the age of 18 have had their booster shot and one-in-seven aged between five and 11 were jabbed in the first week of eligibility.