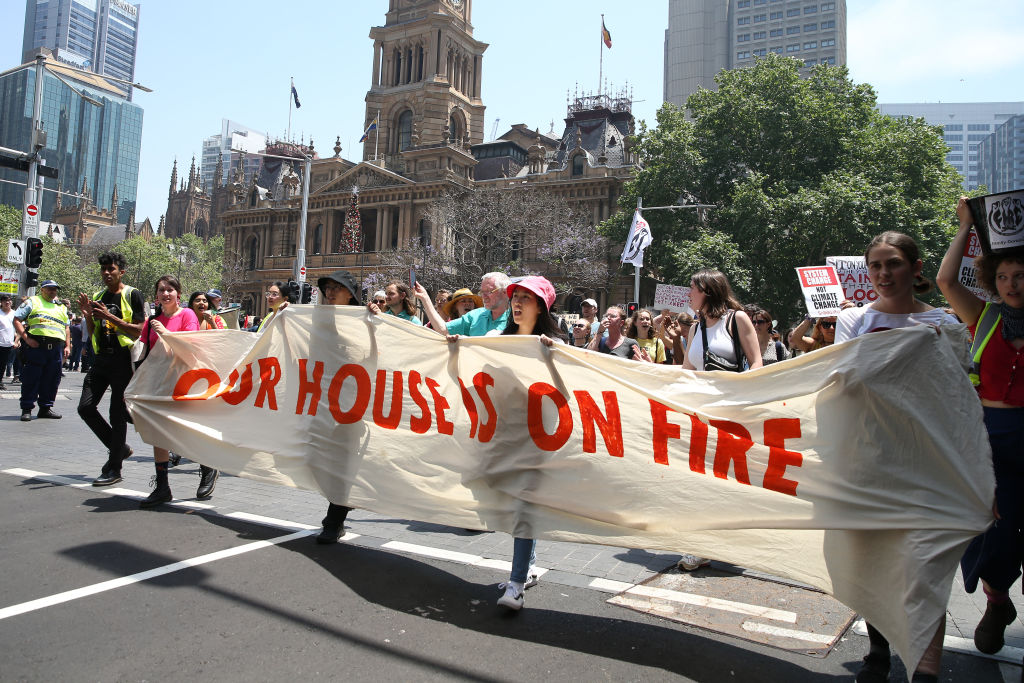 Protesters march through the streets of the Sydney CBD today. Photo: Getty
Thousands of Australian students walked out of class on Friday to join rallies demanding stronger action to rein in climate change, which they say is contributing to the country's bushfire crisis.

Australia has for weeks been battling wildfires which have killed at least four people, burnt about 2.5 million acres (1 million hectares) of farmland and bush and destroyed more than 500 homes.

The rallies, in Sydney and other major Australian cities, were the first in a series of protests by students across the globe demanding governments do more to protect the environment. The protests come ahead of the annual UN climate conference that starts in Madrid on Monday.

Holding home-made signs, including "The climate is changing, why aren't we?", protesters in Sydney accused the government of inadequate action in addressing Australia's bushfire crisis. Smoke from the bushfires in New South Wales state formed a haze overhead.

"Our government's inaction on the climate crisis has supercharged bushfires," said 18-year-old Shiann Broderic, one of the event's organisers, whose home was destroyed in a bushfire.

"People are hurting. Communities like ours are being devastated. Summer hasn't even begun."

Australia has pledged to cut carbon emissions by 26% from 2005 levels by 2030, but recent data shows emissions are unchanged.

The release of the data came as firefighters continued to battle more than 150 blazes still alight across the country that has left more than 5 million people residing in Sydney struggling under hazardous air pollution that has lingered for much of the last week.

While a cool change has eased the threat of more fires, Australia's Bureau of Meteorology on Thursday said much of the country will suffer from continued hot and dry conditions this summer, increasing the chances of more bushfires.