Call for masks as NSW on Covid cusp 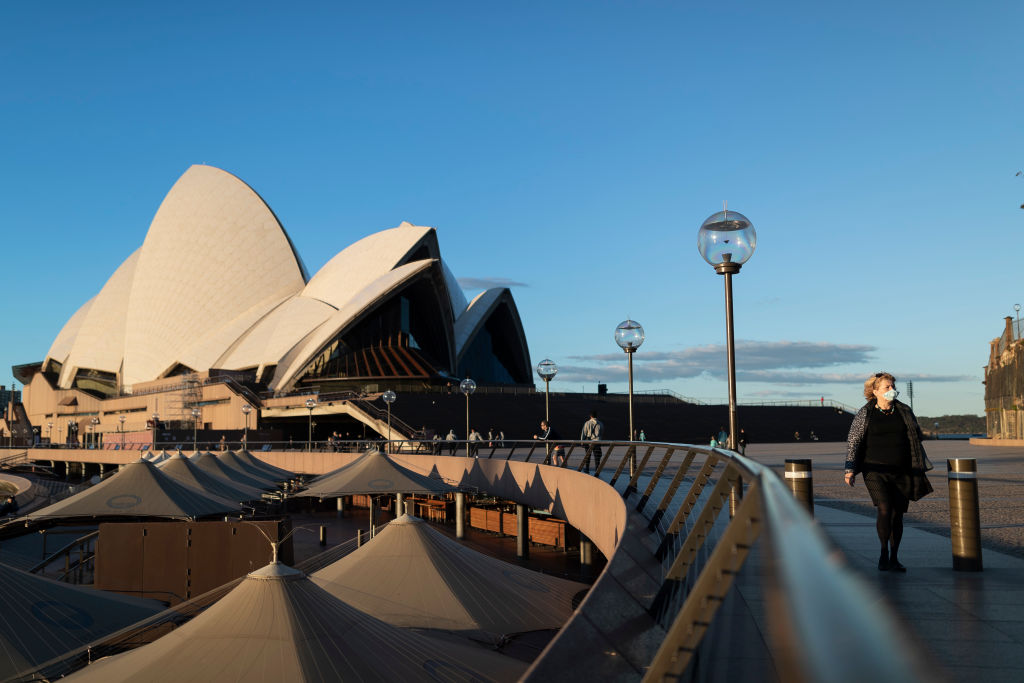 A woman in a mask walks through the Sydney Opera House forecourt back in August. There are renewed calls for New South Wales residents to wear masks in public as Covid cases rise in the state. Photo: Getty
With New South Wales on high alert and numerous Covid-19 alerts issued across Sydney's west and southwest, there's been a renewed call for people to wear masks.

On Wednesday, NSW Premier Gladys Berejiklian warned the state was on the cusp of a fresh outbreak, similar to the one that began in March at a southwestern Sydney hotel that spawned a wave of infections.

"This is the most concerned we've been since that first incident when the Victorian citizen came up, infected his colleagues and went for a drink at a hotel," she told reporters.

"Our state is on the verge of being where it was when we had the first seeding incident from Victoria."

On Thursday, the federal MP for Macarthur and practising paediatrician Mike Freelander said it was time for people to start wearing masks in public.

Dr Freelander's electorate is in the heart of the spreading cluster in southwest Sydney that health authorities are scrambling to contain.

"I do not want to see our numbers get out of control, and force us into a situation in which we see restrictions heighten or return," he said in a statement.

"I am asking NSW residents to wear a mask when in public from today, to protect themselves and the health of others."

The latest Covid-19 alerts include a Westfield shopping centre and two tutoring sites in Sydney's west.

NSW Health says anyone who visited the Al-Jabr maths tutoring centre at Auburn on October 8 and 11 is considered a close contact and must get tested immediately and isolate for a full 14 days, regardless of the result.

The critical times are available on the department's website.

The same alert applies for anyone who visited ACE Tutoring at Parramatta on October 10 between 9.30 am and 1.20pm.

Meanwhile, anyone who attended Westfield Mount Druitt on October 12 between 11.30am and 1pm is considered a casual contact and must monitor for symptoms and get tested immediately if they develop.

The latest alerts come after 13 new cases on Wednesday, two of which were diagnosed in hotel quarantine, and warned the state was on the verge of an outbreak.

Nine of the new cases were linked to an emerging cluster at a Lakemba GP clinic, which now numbers 12 cases. All are household contacts of known cases.

Hundreds of patients who visited the practice are now being tracked down by contact tracers.

Ms Berejiklian had hoped to announce increases to limit on venue bookings and the number of people who can attend weddings but will now hold off.

On Tuesday, the NSW government announced hospitality restrictions would be eased from Friday with up to 500 people allowed to attend open-air concerts, so long as they stay seated and remain four metres apart.

Restrictions for outdoor dining venues will also be relaxed, allowing one patron per two square metres, as long as venues use an electronic QR code to record patrons' contact details.

NSW Health Minister Brad Hazzard said health authorities want upwards of 20,000 people to be tested each day - about 4000 more than were tested in the 24 hours to 8pm on Tuesday.