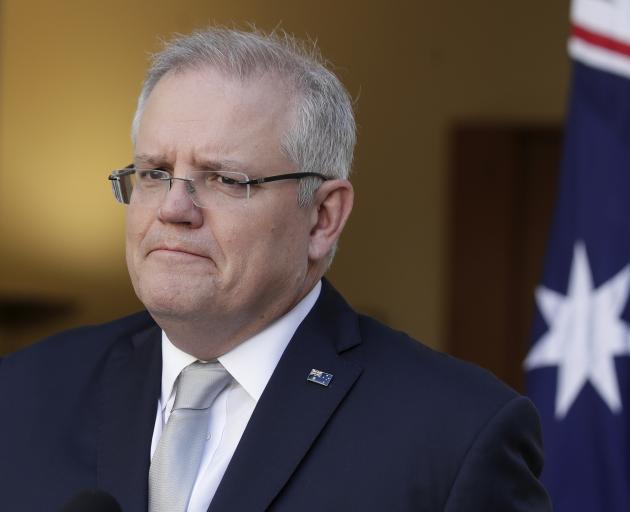 Australian Prime Minister Scott Morrison. Photo: Getty Images
A Chinese warship being tracked off the Western Australian coast did not enter Australian waters, according to the country's prime minister.

Scott Morrison said the Chinese vessel, which was sighted on Friday at 6am, about 250 nautical miles northwest of Broome, had freedom of navigation.

The comments were made despite Defence Minister Peter Dutton claiming the incident was an "act of aggression" and the ship had crossed into Australia's exclusive economic zone.

However, Mr Morrison said Australian officials were keeping a close eye on the ship's movements.

"They're looking at us and we're keeping a close eye on them," he told reporters in Victoria's Yarra Valley.

"This is freedom of navigation. They are able to be in these places, they're not in our contiguous zones or in Australian waters."

A Chinese warship has been tracked off the coast of Western Australian, Defence Minister @PeterDutton_MP has revealed. #auspol #7NEWS https://t.co/DUHqx2UGHO

However, Mr Morrison noted it was unusual for a Chinese ship to be as far south as Exmouth.

"What these events highlight is the serious times in which we're living," he said.

"It's not the first time, it won't be the last time. I suspect we'll see it many more times, but they'll keep a close eye on us."

The Department of Defence confirmed the ship was a Dongdiao class auxiliary intelligence ship called Haiwangxing (Neptune), which was also spotted off the Australian coast last year.

The ship travelled down the west coast towards Exmouth before tracking east along the country's northwest coast.

"Australia respects the right of all states to exercise freedom of navigation and overflight in international waters and airspace, just as we expect others to respect our right to do the same," a defence spokesman said.

"Defence will continue to monitor the ship's operation in our maritime approaches."

Speaking at a press conference in Perth on Friday, Mr Dutton said the vessel had been hugging the coastline.

"It is unusual in terms of the way in which it has come so far south, and the way it's hugging the coastline as it heads up in the direction of Darwin," he said.

"It is an aggressive act particularly because it has come so far south. For it to come south of Exmouth is without precedent."

The ship was being tracked over the past week, but Mr Dutton did not say when he was first alerted to the vessel's presence.

Despite the timing of the announcement eight days out from the federal election, Mr Dutton said it had nothing to do with the campaign.

Labor senator Murray Watt said the opposition took the issue of national security seriously and had sought a briefing on the matter.

However, he said Labor had yet to receive one.

"It would be helpful for us, as the alternative government, to have a few more facts about what the situation is and that's certainly what we will be seeking during this briefing that we've asked for from the government," he told ABC TV.

"I would certainly hope that we don't have a government that misuses security information for political advantage. I'm not alleging that, these are serious matters, obviously ... it's a matter for the government as to how they're using it."