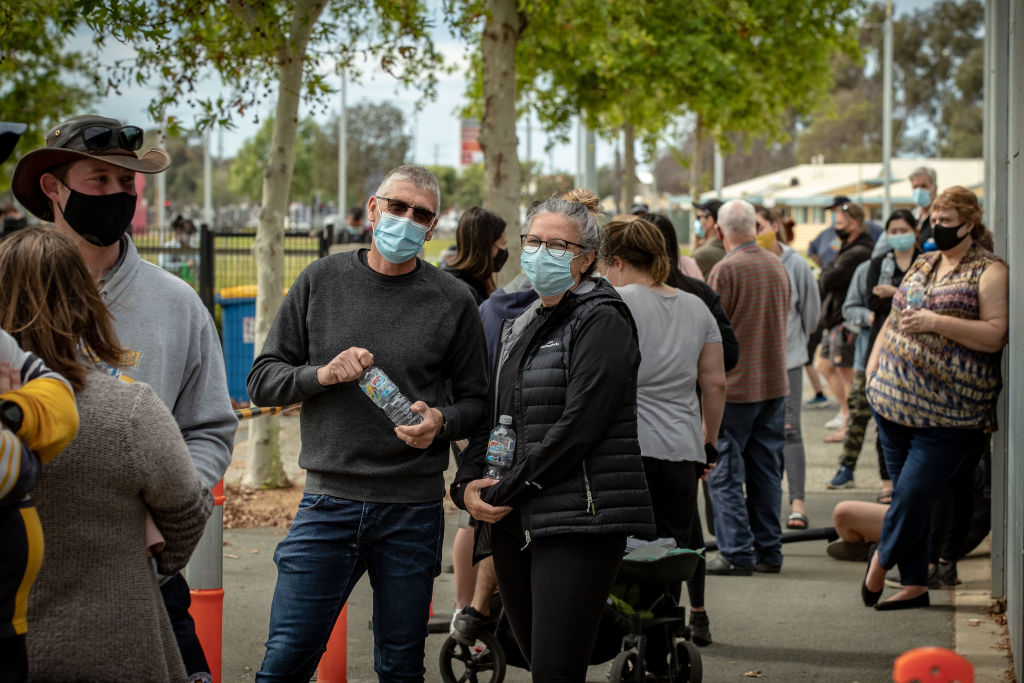 Covid testing at a site in rural Victoria earlier this month. Photo: Getty
Premier Daniel Andrews has all but dashed Victorians' hopes for significant easing of restrictions on Sunday, as an outbreak in northern Melbourne grows.

All staff and students from two schools in northeast Melbourne have been told to immediately get tested for Covid-19 after the emergence of seven cases reported on Saturday.

Four of the new cases were diagnosed in suburban Preston and one is a student from East Preston Islamic College (EPIC).

The results have prompted health authorities to direct all staff and students from the college, and from nearby Croxton School, to get tested and self-isolate, even if they aren't experiencing symptoms.

Both schools will be closed for the next fortnight after two students at EPIC and one at the Croxton School attended classes while infectious.

The premier says tens of thousands of tests are still being processed and authorities need the results to make informed decisions on restrictions, due to be announced on Sunday.

"I just want to caution people from banking that tomorrow I'll be making a whole series of detailed announcements about opening up," he told reporters on Saturday.

"It will be a very late night and a very early morning, so we can get as many results on the table so that we can have the most complete picture available to us."

"It would be wrong to call people to test and then make decisions without having looked at those test results."

Already some 800 residents in Melbourne's northern suburbs have been isolating because of the school outbreak.

Warnings have been circulated to workers, including taxi drivers, who might have visited the area.

"Yesterday, we sent out 22,000 texts and emails to taxi and Uber drivers, across the northern suburbs, to encourage them to come forward to get tested," Victoria's Commander of Testing and Community Engagement Jeroen Weimar said.

"It's an effective way of ensuring we get another cross-section of mobile Victorians in the community and to understand if there's been any transmission through that circuit."

Further north, a number of secondary contacts at Sirius College in Broadmeadows and Ilim College are being tested after they were linked to separate close contacts of a confirmed case.

Saturday's statistics included confirmation of 10 cases in the two weeks up to Wednesday which have a mystery source.

The average number of daily cases in the fortnight up to Friday was five for metropolitan Melbourne and 0.2 in regional Victoria.

The state's death toll remained at 817 on Saturday and the national figure at 905, with only one death in the past week.

Sixteen anti-lockdown protesters calling for an end to the state's restrictions were arrested in Melbourne on Friday, with 96 fines issued.

The rally began at 2pm at the Shrine of Remembrance and continued for hours, erupting at times in violent scuffles between police and demonstrators.

Three officers were injured during the protests and one was taken to hospital.

Several police horses were also hit in the face with a flagpole by a protester, but were not injured.