Dozens of bushfires burning in Queensland

Queensland residents have been warned more properties could be lost and livestock losses will be significant as firefighters continue battling more than 50 fires across the state.

Eleven homes and the historic Binna Burra Lodge have been destroyed by the dangerous blaze in the Gold Coast hinterland.

More than 50 fires are burning across Queensland, the most dangerous in the Gold Coast hinterland where it has destroyed homes and the heritage-listed Binna Burra Lodge. https://t.co/ulR6HBJx4E

Early on Monday the fire was burning on both sides of Binna Burra Rd, south of Summerville Rd, Queensland Fire and Emergency Services said.

The fire is not threatening any homes but residents have been warned that strong winds are still making conditions volatile.

More than 600 firefighters battled blazes across Queensland at the peak on Sunday, with many of those stationed around the Queensland border towns of Stanthorpe and Applethorpe.

Crews are pushing to strengthen the containment lines to ensure that fire stays under control, as the Bureau of Meteorology warns southwesterly winds will increase to 50km/h later on Monday morning.

An exclusion zone remains in place, but some residents are starting to return to homes to assess the damage.

At least eight structures including three homes have been destroyed in that area.

There are more than 50 fires burning right across the state and 11 schools will be closed on Monday.

One home was also destroyed by fire last week in far north Queensland.

Fire bans remain in place across most of the state, which is tinder-dry.

Federal Natural Disaster Minister David Littleproud said the drought had "exacerbated" the fires, saying he felt the force of the dry gusty winds when he spent the weekend at his home, 80 kilometres from Stanthorpe.

"We've had some rain that's created a fuel load there, that has exacerbated the problem there coupled with circumstances on Friday and Saturday that were beyond belief," he told Radio National on Monday.

"I could feel at my own home the winds and some gusts up to 100km/h... and the community of Stanthorpe and Applethorpe bore the brunt of that."

However he refused to be drawn on whether human-induced climate change was also to blame.

The federal and state governments have promised assistance to those affected by the fires.

The Insurance Council of Australia has also declared the situation a "catastrophe", ensuring victims' claims will be given priority.

The warnings follow two possible arson incidents at Pimpama on the Gold Coast on Sunday, where a blaze in a storm water drain and one in bushland were extinguished before they could cause any damage.

Police are investigating these incidents. 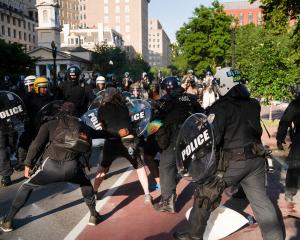