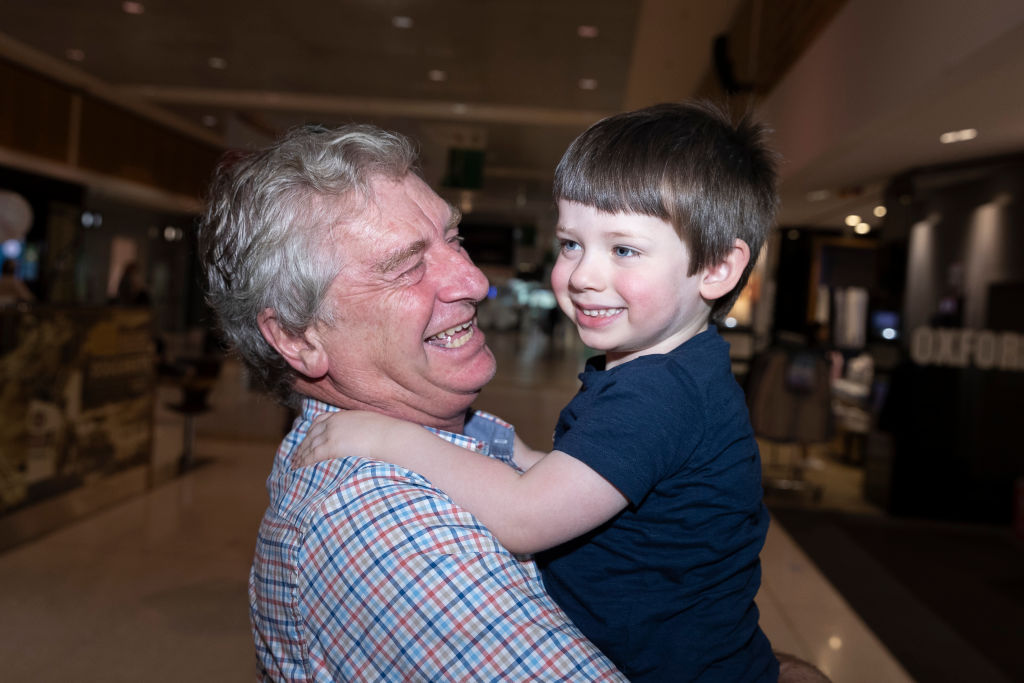 Sydney grandad Alan Kinkade hugs his grandson Tom, who lives in Melbourne, upon meeting at Sydney Airport on Monday after the border between New South Wales and Victoria reopened. Photo: Getty
The New South Wales-Victoria border is fully open for the first time in more than four months, as both states again record no new local Covid-19 cases.

The tally came from 7836 tests, while no patients are in intensive care.

Meanwhile, the NSW-Victoria border opened a minute after midnight on Monday, allowing Victorians to freely visit NSW for the first time since July 8.

The border was closed by NSW in July to stop the spread of Covid-19 as Victorians hunkered down to deal with a second wave of the virus.

NSW is now the only state in the country with no hard border restrictions in place.

Qantas and Jetstar are operating 17 return flights between Sydney and Melbourne on Monday, carrying around 4500 passengers.

Virgin Australia will operate four return services per day between Melbourne and Sydney and plans to progressively increase flight frequency ahead of the Christmas holidays.

During the lockdown, flights on the route dropped as low as one per day.

Qantas and Jetstar sold more than 25,000 seats in the first 48 hours after it was announced the border restrictions would be lifted.

Sydney Airport has also issued new guidelines encouraging passengers and visitors to wear a face mask in areas where it is not possible to maintain a 1.5 metre distance from others.

"From today our message to passengers and visitors is 'social distance if you can, wear a mask if you can't'," Ms Rotsey said.

The operation ran at 64 different sites, stretching for 1000 kilometres.

"The first rotation down there we needed to find 650 police to go and many of those threw their hands up to ... feel proud of what the Covid response was from the state of NSW," he told Sydney radio 2GB.

Meanwhile, QR codes are now compulsory for thousands of businesses in NSW to record customer visits, with pen and paper no longer acceptable for record-keeping at hospitality venues, corporate functions, weddings and funerals.

From Monday, choirs in NSW of up to 30 people are also allowed to sing outside, and audiences and congregations may participate in the singing, but anyone 12 years or older must wear a mask.

In-person visits are also resuming for the 12,866 prisoners in NSW jails who have not had any visitors since the system was locked down in March.