Noosa evacuated as bushfires rage on 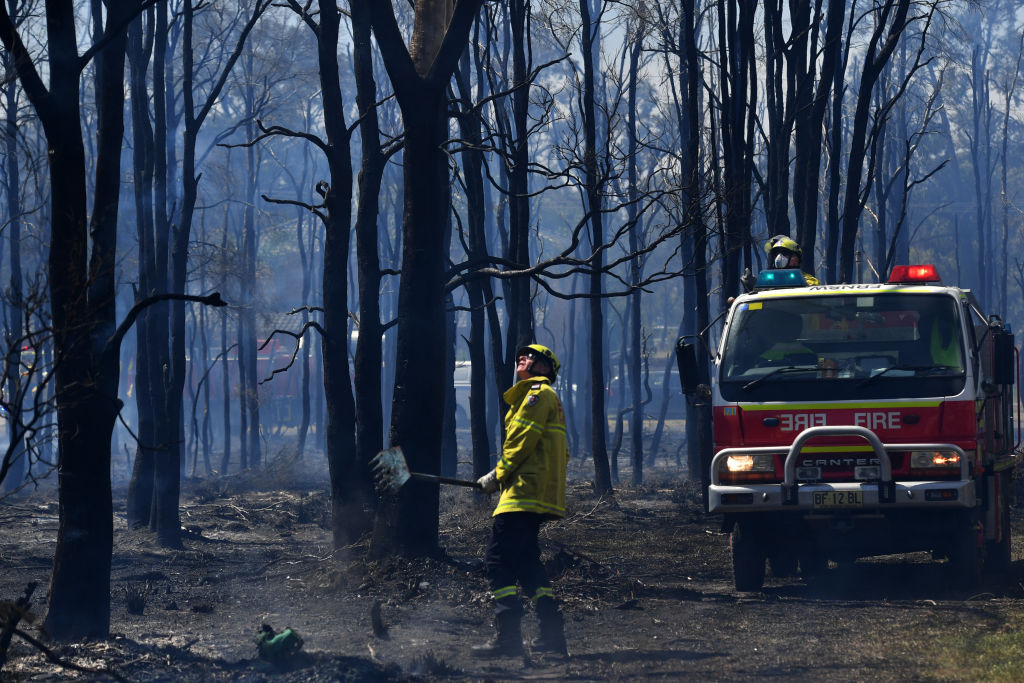 NSW Rural Fire Service firefighters mop up after a bushfire in the Sydney suburb of Llandilo. Photo: Getty
Australian officials ordered people in several communities, including a major tourist destination, to evacuate immediately on Wednesday as firefighters struggled to contain more than 150 bushfires raging across the country's east coast.

While a cool change overnight brought some relief for firefighters in New South Wales state, attention shifted to its northern neighbour Queensland, where hot, dry and windy conditions had created a severe fire danger.

Noosa North Shore residents are being urged to leave the area immediately as a bushfire burns near the First Cutting. 14 homes have now been lost across Queensland in the state-wide emergency. #7NEWS https://t.co/hv20sZPJgy

"Conditions are now very dangerous and firefighters may soon be unable to prevent the fire advancing," Queensland Fire and Emergency Services (QFES) said in the emergency warning. "The fire may pose a threat to all lives directly in its path."

Noosa Mayor Tony Wellington told Reuters many of the residents in the affected north, accessible only by ferry or via the beach, had already evacuated earlier this week.

But he added that winds were picking up, "making things particularly tricky. There are plenty of crews battling the fire, including two helicopters."

Bushfires are a common and deadly threat in Australia's hot, dry summers, but the ferocity and early arrival of this year's outbreak in the southern hemisphere spring has caught many by surprise. They have so far claimed three lives and destroyed about 1 million hectares of farmland and bush.

Blazes have been spurred by extremely dry conditions after three years of drought in parts of NSW and Queensland, which experts say has been exacerbated by climate change.

A helicopter pilot crashed while waterbombing a fast-moving grass fire at Pechey on Wednesday. The pilot has been treated for non-life threatening injuries after efforts to bring the fire under control went awry. An emergency warning for that blaze remains in place, AAP reports.

Much of southern Queensland is covered by a severe fire danger warning but a brief reprieve is expected when conditions ease on Thursday.

Moist coastal winds will blow through Thursday ahead of westerly winds on Friday. But forecasters say the westerlies will push extremely dry air back towards to coastal fringe.

"There is an extended forecast that we are not out the woods by any means," Acting Queensland Fire and Emergency Services Commission Michael Wassing said.

#Bushfires can create their own weather, generating #pyrocumulonimbus clouds & storms 🔥🌩️ These clouds can cause dangerous & unpredictable changes in fire behaviour, making fires more difficult & hazardous to fight. Find out how they form in our blog: https://t.co/wmSneK4sA2 pic.twitter.com/Bigl1G3BJr

More than 1.1 million hectares of land have been either burnt or burning, and the hot and windy conditions are set to spike again next week.

"We will not have all these fires contained before then," New South Wales Rural Fire Service Commissioner Shane Fitzsimmons told reporters in Sydney on Wednesday.

"We will not have all these fires contained and locked up for many, many weeks.

"Unfortunately, what we need is rain ... and there is certainly nothing in the forecast for the foreseeable future that's going to make any discernible difference to the conditions."

Some 300 homes have been destroyed in NSW in recent days, Fitzsimmons said, as flames stretched from the state's north coast to within metres of homes in Greater Sydney.

No deaths were reported on Tuesday as warning systems and evacuation plans appeared to save lives in the face of what officials said was the greatest threat in at least a decade.

"It was just chewing up everything," Karen Weston told Australian Broadcasting Corp from an evacuation centre of a fire near Taree on the mid-north coast. "I've survived two other bushfires before this but never anything like this."

Crowe said the property had "lost a couple of buildings", some fires were still burning and "we are out of water".

Former deputy prime minister and current lawmaker Barnaby Joyce was among those who have suggested that climate activists were at least partly responsible for the fires by lobbying to reduce so-called "back burns", fires deliberately lit to clear out dry undergrowth.

Deputy Prime Minister Michael McCormack, meanwhile, said link between the fires and the government's support of the coal industry were "the ravings of some pure, enlightened and woke capital city greenies."

Prime Minister Scott Morrison, who has repeatedly declined to comment on climate change during the current crisis, called for moderation in the debate on Tuesday.

Fitzsimmons waded in on Wednesday, saying when asked: "We are mindful that the science is suggesting, and we are experiencing, that fire seasons are starting earlier and are extending longer," he said.

"There is no doubt that this drought is having a profound effect."