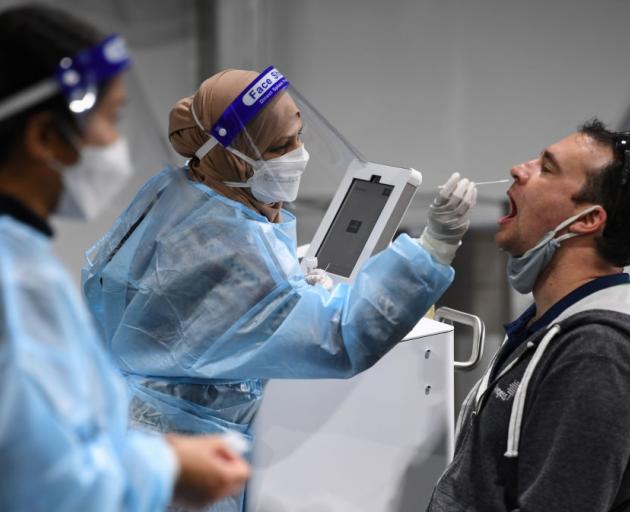 But the number of new infections have fallen to their lowest mark this year, with 15,091 new cases, NSW Health said on Monday.

Some 2816 people are being treated for Covid-19 in hospital - 104 higher than Sunday's figure and 47 short of the highest total, reported on Wednesday.

There are 196 patients in intensive care, while 24 deaths were reported.

Since the pandemic began some 1112 people have died with Covid-19 in NSW, including 227 in the past week.

Meanwhile, an extra two million rapid antigen tests will be delivered to NSW schools before lessons resume for 2022.

Two test kits per week will be issued to 1.3 million pupils and staff across 3000 primary and secondary schools throughout February. Early education and childcare centres are also included in the scheme.

"We've really shifted from that approach," she told Seven's Sunrise program on Monday.

Instead parents will be notified if there's a positive case in their child's year, and any child who tests positive will be required to isolate at home.

"We'll ask you to monitor for symptoms and ... use those rapid antigen tests just to check that your child continues to test negative," Ms Mitchell said.

It's anticipated that cases will rise in the community after children return to school but the alternative - keeping schools closes - was undesirable, she said.

Premier Dominic Perrottet said it is the right decision for students to return to face-to-face learning amid the Omicron wave.

"I know many parents are anxious but ultimately we know kids do better in the classroom," he told reporters on Sunday.

"It is what is best for mental health and social outcomes."

Four million RAT kits have already been issued to school communities and another two million are expected to land by Tuesday evening, ahead of the February 1 term start.

Chief Health Officer Kerry Chant is urging parents not to send kids if they have symptoms, even if they test negative.

About 20,000 air purifiers will be issued to schools and principals provided with specific advice on how to maximise natural ventilation.

Masks remain mandatory for high school teachers and students, and are recommended for pupils in Year 3 and above.

Visitors to schools will be limited and Covid-safe plans implemented for excursions.

There are also extensive contingency plans to cover staff absences from a pool of 1000 student and retired teachers as well as hundreds of trained departmental officers and school administrators.

The NSW Teachers Federation said it will closely monitor the effectiveness of the measures, while the opposition criticised the short time between the plan's announcement and the start of term one.