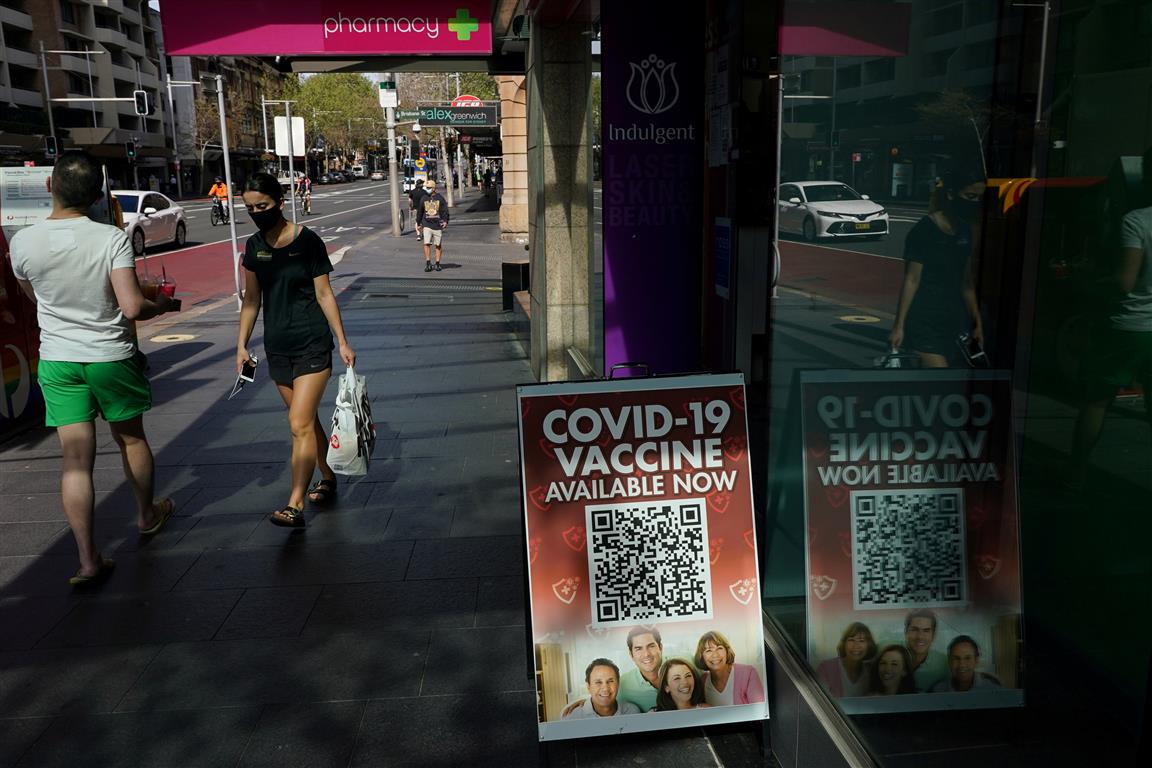 A sign advertises Covid-19 vaccines at a Sydney pharmacy. Photo: Reuters
New South Wales has reported 1351 new locally acquired cases of Covid-19 and 12 deaths, taking the toll for the current outbreak past 200.

The toll for the current NSW outbreak now sits at 210, and 266 for the entirety of the pandemic.

There are 1231 Covid-19 patients in hospital in NSW, with 231 people in intensive care beds and 108 on ventilators.

Residents in the coronavirus hotspot areas of southwest and western Sydney, meanwhile, are being urged to come out in even greater numbers to be vaccinated as a local curfew is lifted.

Vaccination numbers in the 12 local government areas of concern have been surging, but authorities want them to push even further, beyond 90 per cent.

The unvaccinated would be shut out of much of society when it began to reopen at the 70 per cent double-dose threshold, Premier Gladys Berejiklian said on Wednesday.

NSW on Tuesday reached 80 per cent first-dose vaccination coverage in those aged 16 and over.

"There are almost 8.5 million people in NSW that have had vaccines administered to them," Health Minister Brad Hazzard told reporters on Thursday.

Ms Berejiklian said the "lockout" of unvaccinated people would be mandated in the public health order and not up to the discretion of businesses.

Nervous business groups are seeking clarity from the government as they approach the date they will start having to turn unvaccinated people away.

Ms Berejiklian said the government was seeking legal advice on how to handle the issues.

Elsewhere, 12 people have been diagnosed with Covid-19 across three social housing buildings in Redfern in inner Sydney.

A spokesman from Sydney Local Health District said a mobile vaccination team was visiting each tower building to provide vaccinations to residents and almost two-thirds had been vaccinated.

"Sydney Local Health District has extensive experience in caring for vulnerable people with complex health and social needs, and is working closely with the Department of Communities and Justice to support residents in the three buildings," the statement said.