The Australian cleric was convicted in December last year of five charges over the rape of one 13-year-old choirboy and sexual assault of another at St Patrick's Cathedral in Melbourne in 1996.

One of his victims died in 2014, while the other gave evidence at trial.

Pell was emotionless in the dock on Wednesday as the Court of Appeal sitting in Victoria rejected the centrepiece of his appeal in a 2-1 decision in Melbourne.

"Cardinal Pell is obviously disappointed with the decision today. However his legal team will thoroughly examine the judgement in order to determine a special leave application to the High Court," his legal team said.

"While noting the 2-1 split decision, Cardinal Pell maintains his innocence. We thank his many supporters."

Disgraced cardinal George Pell will remain incarcerated for at least another three years and two months, after failing to win his appeal in the Supreme Court of Victoria. https://t.co/yhFzKvTZqO @ChrisReason7 #7NEWS pic.twitter.com/ZLBoQ0jY80

Chief Justice Ann Ferguson and President Chris Maxwell were agreed in their decision, while Justice Mark Weinberg said he would have ordered that Pell be acquitted.

Pell was sentenced to six years in prison, with a non-parole period of three years and eight months.

Justice Ferguson said she and Justice Maxwell believed the complainant was a compelling witness, not a fantasist.

"Throughout his evidence the complainant came across as someone who was telling the truth," she said.

"He did not seek to embellish his evidence or tailor it in a manner favourable to the prosecution."

Justice Ferguson said the judges had watched the evidence, including some parts a number of times.

They also visited the cathedral and examined the robes, which Pell's defence team had argued were too heavy to be pulled aside so he could expose his penis, as had been alleged.

"We found the robes were capable of being manoeuvred in a way that could be described as moved or pulled aside," she said.

Cardinal George Pell makes his way back to prison in handcuffs, to continue his six-year sentence. #Pell #9News pic.twitter.com/uW5NjMPH1c

Justice Weinberg, however, said there was cogent and in some cases "impressive" evidence that the complainant's evidence could not be acceptable.

He found that the complainant's evidence contained "discrepancies" and "inadequacies".

"It caused him to have a doubt as to the applicant's guilt," Justice Ferguson said. "In his view the convictions could not stand."

However, his decision was overruled by the majority.

Pell applied for leave to appeal on grounds that County Court Chief Judge Peter Kidd had made two errors, including not allowing an animation of what the defence said occurred in the cathedral that day.

There was no evidence of any kind that this particular scenario presented in the animation had occurred, Justice Ferguson said.

"It was plainly intended to plant into the minds of the jury that the complainant's account was impossible," she said.

They also ruled that Pell was not required to be physically present when he was arraigned - officially asked how he pleaded - in front of the jury pool. Presence via videolink, as occurred, was sufficient. 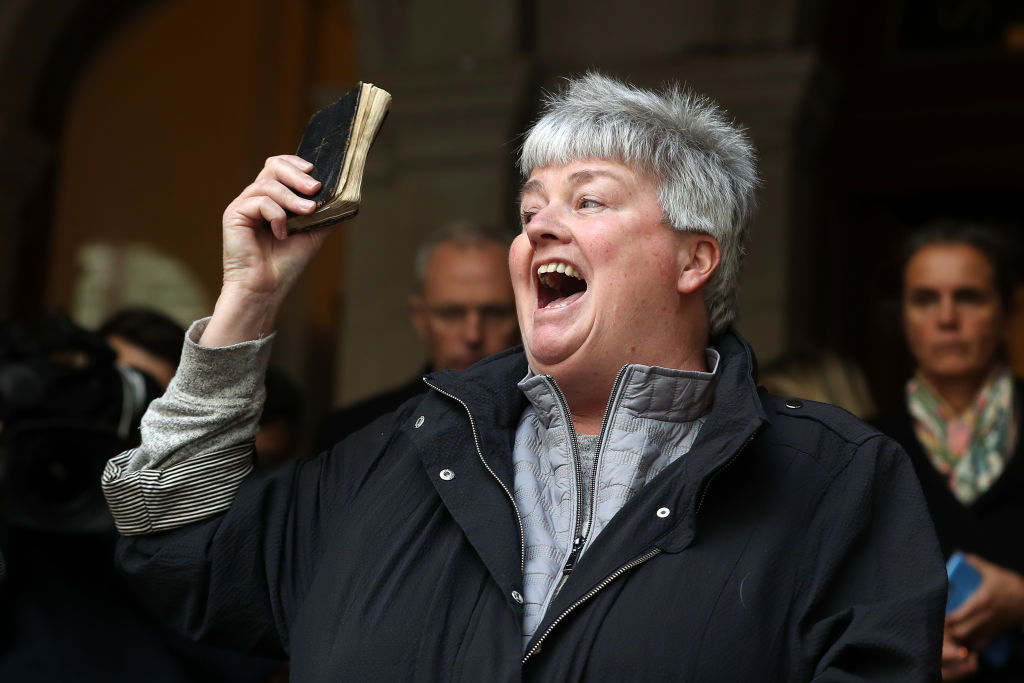 Julie Cameron, an advocate for victims of child sexual abuse, addresses the media at the Supreme Court of Victoria after the ruling. Photo: Getty Images
ABUSE VICTIMS: 'WE'VE BEEN WAITING FOR THIS MOMENT'

A group of former wards of the state let out loud cheers outside the Victorian Supreme Court building on Wednesday as the decision to reject Pell's appeal was announced.

"Justice has been done," he told reporters.

"It's an historic day. It's an historic moment. The third in charge of the Church - something's happened to him and I think that's a good thing because if he's found guilty, he's guilty.

"This is what all of us survivors have been doing - we've been waiting for this moment to come."

One supporter of Pell was shouted down when she tried to say the cardinal was innocent, comparing the case to Lindy Chamberlain, who was found guilty of killing her baby Azaria before being later cleared.

"I can't see any evidence that he's done what he's done," said Karen, who said she was not a churchgoer.

"You are picking on him because he's a priest," she told a woman talking over her who called her evil.

"It's going to be like Lindy Chamberlain - in 20 years' time they're going to find out he did not do anything."

An abuse survivor who goes by the pseudonym Michael Advocate used a loud speaker to declare it an outstanding result for victims.

"What a tremendous result we've had for victims this morning," he said.

"George Pell, you can rot in hell. You can burn in hell. The man's legacy is destroyed."

Mr Advocate said he was shocked by the result but happy.

"It sends the right message that justice will prevail," he said. "Justice has prevailed."

Chrissie Foster, whose daughters were abused by a paedophile priest, said the truth won.

"This is very a high-profile, very powerful person. In the church, in the Vatican, surrounded by all of that, and how much money he has, he's got the power, the best defence money could buy," she told reporters.

"Yet that did not convince the jury to find him innocent. To have that upheld is just outstanding."

Cardinall Pell will be stripped of his Order of Australia after losing his appeal.

In 2005, Pell received the honour for his service to the Catholic Church in Australia and internationally and for raising debate on matters of an ethical and spiritual nature, to education and social justice.

Prime Minister Scott Morrison told reporters in Canberra on Wednesday his sympathies lay with the victims of child sexual abuse, not just today but "on every single day".

"My understanding is that this (appeal loss) would result in the stripping of the honours that are decided externally to the government," Mr Morrison said. "That is a process that is done independently, and that course will now follow."

A spokeswoman for Victorian Premier Daniel Andrews said it was not appropriate to comment on the decision as the courts were independent of government.

"Our thoughts are with the victims and their families during this incredibly difficult time," she said.