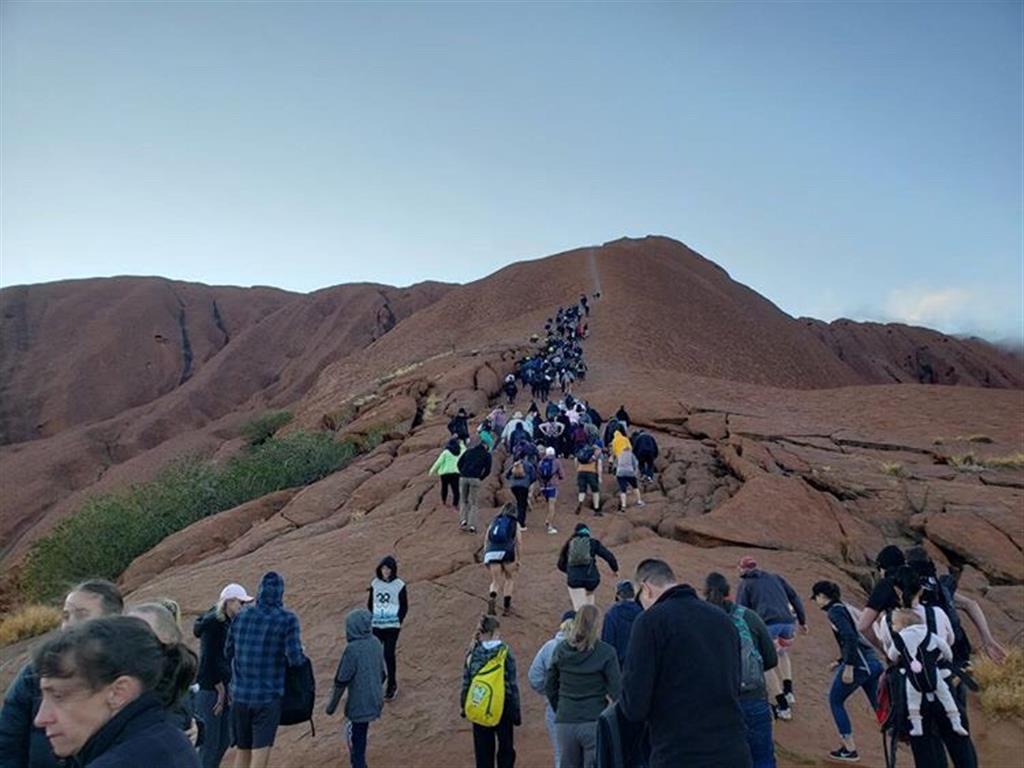 Tourists crowd a trail as they climb Uluru recently. Photo: Reuters
The air is hot and full of flies, it's the desert and the nearest decent town is a five-hour drive away but there are thousands of tourists here.

The drawcard is the big, red sandstone rock Uluru that abruptly rises 348 metres.

A controversial ban on climbing it in line with Indigenous traditional owners' wishes takes effect on October 26.

Some domestic tourists could have gone to Europe for what they paid to come from far flung parts of Australia to spend just a weekend at Uluru, with all hotels at close to 100 percent full.

Yes, it is a moving, spiritual place but climbing the UN World Heritage-protected site during once in a lifetime visits is why many are here.

Friends since school Jeff Lis, 52, and Stefan Gangur, 51 left their wives in Melbourne for their first trip to the Red Centre.

"I can remember as a kid I always said I'm going to climb that one day ... now that they're closing it, we thought well let's get here while we're still relatively mobile," Mr Lis told AAP. 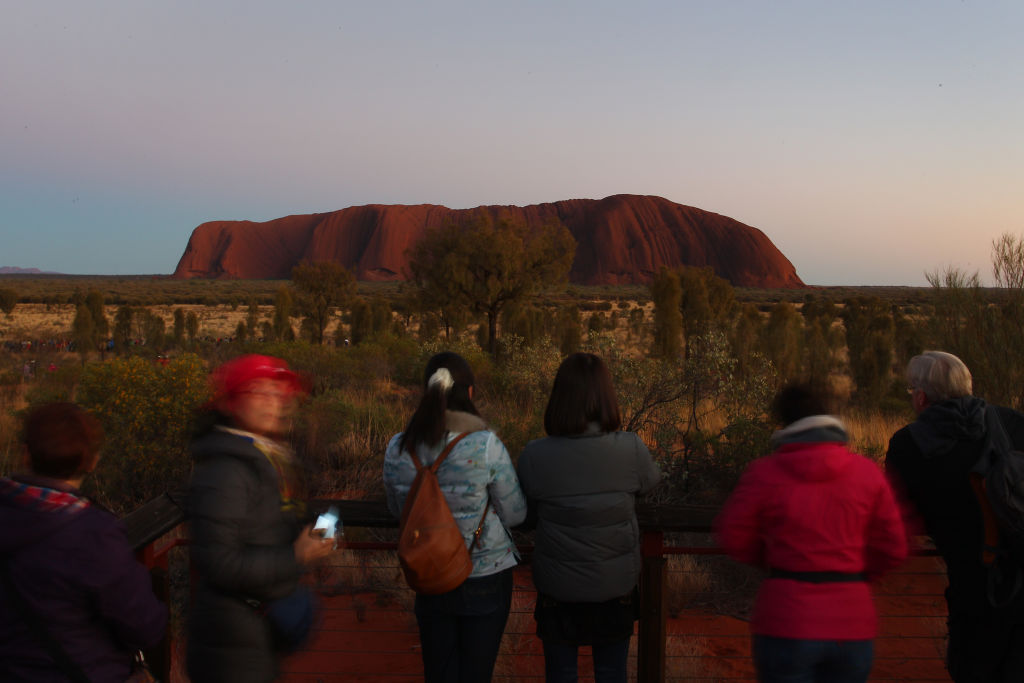 Visitors to Uluru take photos from a viewing area during sunrise. Photo: Getty
The temperature will exceed 36 degrees and the climb is only open between 7am and 8am as regulated, allowing a small window for the hordes to climb.

It is a bizarre scene to see hundreds of people from around the world and of different body shapes and fitness levels queuing and almost climbing over each other to scamper up the dangerous, sheer face.

Minga, which means ants, is what the Anangu traditional owners call the tourists.

A chain handhold was built in 1964, but authorities have never made it easy and it was always intended to eventually ban the climb after the land title to the Anangu was given back on October 26, 1985.

At least 37 climbers have died.

The race to beat the ban has been stressful for Uluru-Kata Tjuta National Park staff such as ranger in charge Greg Elliot who must rescue the many people who get injured during the dangerous climb.

During AAP's visit, a 12-year-old South Australian girl fell 20 to 30 metres while descending, fracturing her finger, injuring her ankle and covering herself in grazes.

"This year is another step up in the craziness scale, 'climb fever'," Mr Elliot told AAP.

"It causes us us a lot more work, this is too much, we can't do our jobs at the moment and have got so much work we should be doing out in the park, maintenance we don't get to because we have to focus on this."

He rejects suggestions it is unduly unsafe, saying there are far more per capita casualties at places such as the Grand Canyon or Mt Fuji.

But he has been exposed to deaths and relates stories of unsafe behaviour, including parents carrying babies up in backpacks and terrified children forced to go up or separated from parents.

The ban followed a vote by the National Park board in 2017, citing Uluru's cultural significance to the Anangu people including Tjukurpa, the word for their beliefs and law, as outweighing economic considerations.

The park's general manager Michael Miss described it as a simple "question of law" as it was Aboriginal land.

Their role as caretakers of the land is in conflict, since the rock's path is scarred by decades of tourists' feet, the waterholes damaged by human waste and there is the trauma of climbers dying, she says.

"The climb is around a significant site, it is a big part of Tjukurpa which has not been able to be told because of interference from tourists," she told AAP.

The Anangu, who live in the indigenous community Mutitjulu near Uluru, welcome tourism and hope visitors will have a more rewarding experience learning about their culture, she said.

Traditional owner and chairman of the powerful Central Land Council Sammy Wilson told AAP he hoped future generations of Australians would come together and respect the place after the ban.

The rock, he once said, was "not a theme park like Disneyland".

"I've got some pretty strong views on it personally, I was born in Australia, it is part of my culture and ancestry as much as anyone else's but I'm not laying claim to it, saying it is mine or a sacred site or anything like that," Mr Lis said.

They believe it should be kept open, but made safer with a fee imposed.

South Australian rural schoolteacher Jenna Hewlett said it was upsetting other people won't get to enjoy what she said was "quite the experience".

Paul Newcombe was tempted but decided not to climb out of respect to Indigenous wishes and was waiting for his wife and teenage daughters to come back from climbing.

He said he had grown up playing football with Aboriginal people from a mission at Cowra in NSW and likened the climb to climbing over a church.

"A lot of people come here and climb it and say they've been up there but have they ever researched it, have they ever looked into the history of it?"

"I am doing a free tour with the ranger to learn about the history and culture, it is better than the harbour bridge or anything else we've got."

The Braathen family from Norway decided not to climb after reading about it and seeing so many signs discouraging it.

"When a lot of people tell you not to do something," says Henrik, 17, "... it is pretty obvious you are not allowed to do it," his 11-year-old sister Kristine finishes.